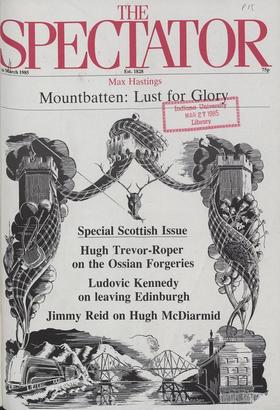 Red Ken's epiphany p icture this morning, as 'Crossbencher' 1 of the - Sunday Express may well have said last Sunday, Mr Ken Livingstone, the leader of the GLC. What thoughts,...

rr he March/April issue of the magazine 'Antiques Across The World contains an article by Sir lain Moncrieffe of that Ilk. The contents page advertises it thus: WARNING OF...

S o he has come at last. The golden boy of Western Kremlinology, 'young', 'humorous', 'charismatic' Mikhail Gor- bachev is finally at the helm, and the World's media sing, like...

In this, our Scottish issue, we are delighted to be

able to congratulate Mr James Kay on an extraordinary victory. Mr Kay who, under the pseudonym of Seumas Ban, was one of the winners of our Scottish poetry competition last...

Lessons of Jamaica Auberon Waugh efore leaving for an important fact- .1.1 finding mission to Jamaica on 27 February — it really is a most agreeable time to be there — I read...

I hear, as Mt . Nigel Dempster might say, of an important marriage heading for the rocks. After their fashionable and well- attended wedding in the snows of January, at which...

Sam White Paris I t will be only after the second round of voting in the Cantonal elections this Sunday that President Mitterrand will de- cide whether to introduce an element...

We cannot see the special `hardship' to Lord Durham upon which some of our contemporaries are so eloquent. It is a terrible misfortune for any man to see his wife become...

On leaving Edinburgh Ludovic Kennedy T he last of the children had left for points south and beyond, and if we were to continue to see anything of them, we had to move too. In...

Allan Massie A t first glance, the Secretary of State for Scotland looks a little out of place in the present Cabinet. Its other leading figures are, as the sociologists say,...

Wrong but romantic Hugh Trevor-Roper B efore 1745 the Scottish Highlanders were despised barbarians. In 1745 they were feared barbarians. After 1746 they could no longer...

Jo Gnmond O ne of the most curious features of the last war was the number of lectures to which the troops were subjected; they bore them with good-natured tolerance. A brother...

Roy Kerridge B y coincidence I have visited the beauti- ful city of Perth, former capital of Scotland, once in every ten years. On my first visit, in 1965, I stayed at the...

Michael Fry Edinburgh A dead hand has lain on Scotland since 1979. A generation reared on heady dreams of devolution has sunk into morose listlessness, or joined the diaspora....

A true Scot Paul Johnson rr he Scottish presence in British journal- .1. ism, not least in Fleet Street, is power- ful and pervasive. It dates from at least the days of the...

The signal to sell I intend nothing personal when I wonder how David Sainsbury plans to spend next Tuesday afternoon. Mr Sainsbury is the finance director of the grocery...

G ood news from the Royal Exchange, that handsome City nest where Guar- dian Royal Exchange Assurance has cast itself as the cuckoo. GRE, for the sake of giving itself more...

R ival bidders jostle on the steps of Harrods, while, within, the chairman stands at bay. Then the rough bidder jostles his softly-spoken rival aside, mar- ches in to the...

J am grateful for the anxious inquiries .which followed the announcement (in last week's Spectator) that I was recovering from injuries sustained at a health farm. It has been...

T he gilt-edged market's hopes and fears are of a different order. Government stocks (and, now, companies' loan stocks too) are outside the scope of capital gains tax, provided...

Colin Welch will resume his column next week.

Sir: Although I see that the purpose of last week's Home Life piece was to send 1.IP believers in spirits, I wish Alice Thomas Ellis had told us what was producing the odd...

Sir: Your readers of today might be in- terested in a piece of history that almost got away — the signatures of some of your famous readers who subscribed to the Spectator...

Sir: Auberon Waugh also has New Testa- ment authority for detecting the hand . of God in the nasty diseases from which practising homosexuals suffer (Another voice, 23...

Rotten Apples Sir: Richard Body's breathtaking advocacy of British withdrawal from the Atlantic Alliance (3 March) needs a follow-up in your columns. Soviet Russia, we are...

Sir: It must surely be churlish to complain about a review which at least in passing describes one's work as 'excellent'. But A.N. Wilson's account (Books, 2 March) of my The...

Sir: I am very sorry that my tribute to Alastair Forbes in your issue of 23 Febru- ary should have contained an untrue state- ment capable of causing him considerable...

Next Week John Grigg on Hugh Dalton Shiva Naipaul on

After the war was over

The dust silvers and a wind from the corner Brings a dream of clarinets Into the thick orchestra. There's a place sending Messages across the river of people; And the sullen...

P. J. Kavanagh The Poetical Works of Andrew Young Edited by Edward Lowbury and Alison Young (Secker £12.95) T he case of Andrew Young is an in- teresting one. Born in 1885, he...

Jimmy Reid The Letters of Hugh McDiarmid Edited by Alan Bold (Hamish Hamilton £20) C hristopher Murray Grieve, alias Hugh ,-McDiarmid, will remain, for me at anY rate, an...

There is now a small charge of fl per insertion (max. 2 books). Cheques made payable to The Spectator. Please send details to Books Wanted, The Spectator, 56 Doughty St, London...

Regime of the house: the sun's morning Tour, his unsuspected finger on a dim corner. The house is not primed for my presence. I intrude On its private life. Forgive me, house,...

Between mountain and sea

In the air, honey and salt, - as in the long ago, as on forever. The days pick me up and carry me off, half child, half prisoner, on their journey that I'll share for a while....

The friends of liberty

Robert Stewart The Scottish Enlightenment and the Militia Issue John Robertson (John Donald £18) W hat, you may say, has the Enlighten- ment, that affair of speculative philo-...

Scottish heritage Hugh Montgomery-Massingberd 4I t is never difficult', as P.G.Wodehouse observed, 'to distinguish between a S cotsman with a grievance and a ray of s...

To blame Colin Bell L ast week in a Glasgow sale room, an extremely rare gold snuffbox was sold for £10,800. It was a presentation box inscribed 'as a token of gratitude from...

Irish genius Christopher Edwards The Plough and the Stars (Citizens' Theatre, Glasgow) A riot at the Abbey Theatre Dublin greeted the opening of O'Casey's play in 1926, the...

Powerplay Ursula Buchan G ardening can be tedious. However, gardeners display a reticence about this fact that amounts almost to a conspira- cy of silence. Many wish to...

Modern times Peter Ackroyd Wetherby ('15', Curzon West End) W etherby is certainly a very serious film; its worthiness shines through but, like a weak sun, it is apt to give...

Day after day Taki T hroughout the past three months I have kept a diary, which in view of the time I had on my hands, makes Proust a remembrances postively laconic. This was...

Bottoms up Alexander Chancellor I n those happy, far-off days when News at Ten was regularly presented by Reginald Bosanquet and Anna Ford, it was the contrast between them...

Bailiffs• Alice Thomas Ellis A very cheeky letter from the bailiffs proposing to imprison someone or maybe me. It begins with a fine impartial- ity — Dear Sir/Madam, Re: Rate...

True story P. J. Kavanagh T .F. Powys, author of the remarkable novel Mr Weston's Good Wine, whenever he felt himself particularly gloomy and rebarbitive, which he often did,...

Jaspistos reports: Competitors were asked for an extract from a farce involving customers and staff of a restaurant whose advertisement features the words: 'Clan- destine...

No. 1363: Early warning Set by Jaspistos: A story for young children please (maximum 150 words) which cheer: fully inculcates a cheerless lesson appropri - ate to the modern...

Aliquid novi Raymond Keene I n recent articles the World and Com- monwealth championships have tended to push out other events, but plenty has been going on, and I plan to...

Wine Club Auberon Waugh T he white burgundy which I trailed last time — Bonhomme's 1983 Macon Vire —is still not available, having been held up by the cold weather which...