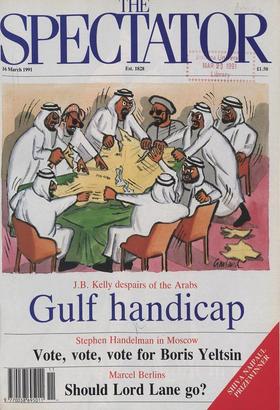 'What did my sperm donor do in the war, Mummy?' T he Liberal Democrats won a by- election in Ribble Valley, overturning a 19,500 Conservative majority, which was largely fought...

Things fall together, the centre cannot hold NOEL MALCOLM A ll editors have a mental blacklist of turn-off topics: subjects which, whatever their intrinsic importance, are...

A s some Spectator readers may have noticed from the address at the bottom of my occasional and sometimes rather cross- patchy letters to this magazine, I live most of the year...

An observation which may be relevant to the poll tax debate AUBERON WAUGH T hey managed to find one old fool in the Ribble Valley, wherever that may be, who averred that he...

LET'S NOT LEAVE IT TO THE ARABS

J. B. Kelly feels that, after an overwhelming victory, the United States, not the Arabs, must impose order on the Gulf The Arabs consider that they are the victims of a...

Stephen Handelman reports on the battle between the Soviet Union's two leading politicians Moscow OLEG Gusarevich received a terrible shock when he arrived in Moscow recently...

Robert Barnett on the repeated British betrayals of Tibet WHEN the Dalai Lama of Tibet arrives in London this Sunday, 17 March, 32 years to the day after he fled from his...

THE ENGLISH WAY OF DEBT

James Buchan finds they manage mortgages differently in New York and Camden THE first house I ever owned outright was in Lavender Hill, Battersea. I bought it in 1981. I...

persist . . . TI-IERE is only one thing worse than treating working-class patients, and that is treating middle-class ones. The former are inarticulate and ill-informed, the...

the Churches scuppered themselves in the Gulf THE churches, as reflected in the media, did not have a good war. For once, too, the papists emerged no better than the Angli-...

A pre-Budget flap, as curing the poll tax takes the shine off the speech CHRISTOPHER FILDES F rom Whitehall and Westminster come the unmistakable signs of a pre-Budget flap....

Caviar to the Midland

TO CALL Sir Kit McMahon a high street banker is to categorise caviar as sea food. The Midland, though, is at heart a financial fish-and-chip shop, and I expect that his...

THE Bank of England prowls around the City like a cat which cannot think where the canary has gone but keeps licking its whiskers. Asked about the changes at the Midland, the...

THE Midland, Sir Kit could see, needed money and needed a friend — best of all, a friend with money. (So it still does.) His answer was have a clear-out of foreign debt, and...

I TRUST that Norman Lamont, as an old Rothschild man, has asked the Barings what to put in his Budget. Peel did that, 150 years ago. He wanted to cut tariffs, he risked a...

Sir: Noel Malcolm's article on the best method of opposing

IRA terrorism re- quires a postscript. He argued that the IRA could best be defeated by treating Northern Ireland as if it was part of the UK mainland. How many politicians from...

Sir: John Keegan criticises the television grandees CA plague on the BBC', 2 March) for the condescending and opinion- ated way in which they have 'strung us along' during the...

Sir: Congratulations to John Keegan for calling to order the

professional doubters who on television and the radio have been misleading public opinion during the Gulf crisis. I have been struck by their bullying attitudes, often at the...

Unconditional union Sir: I have seldom read a better critical analysis of the Northern Ireland situation than the article by Noel Malcolm (Politics, 23 February). A copy of it...

The importance of coffee

Sir: When, oh when will The Spectator grow out of its truly ossified stance on spiritual matters? Charles Moore's latest article, 'The hungry sheep look up and get their coffee'...

Sir: John Harris (Letters, 2 March) is right. It was Bishop Johann Fugger of Augsburg who died of a surfeit of Est! Est! Est! in Montefiascone (12th century). He was buried in...

Sir: Tanya Harrod's article on the Badmin- ton Cabinet (Arts, 9 March) only demons- trates again the ambiguous English attitude to objets. The variant of 'The Three Graces' that...

Sir: We can all be in favour of home rule for the Baltic States. But surely within a federal union for Russia is the better option. For one thing they have large Russian...

Sir: Charles Moore (Another voice, 23 February) ought to take comfort from the fact, which his rather oblique reference to testosterone hormones confirms, that male baldness is...

Sir: Your diarist Craig Brown (16 Febru- ary) suggests that 'there is a splendid opening for a concerned media couple in Fairbanks, Alaska', citing Desmond Wil- cox and Esther...

Sir: Ian Thomson's review of The General in his Labyrinth (Books, 12 January) men- tions that Simon Bolivar was 'cleaning his teeth with a silver-handled silk brush'. It is...

Sir: Andrew Roberts suggests that Sir Peter de la BilRre should be bought a fine house as a reward for his outstanding success in the Gulf CA Blenheim for de la BilHere', 9...

Sir: Christopher Fildes's Oxford card school (City and Suburban, 2 March) would, I am sure, have included a few sporting lenders to buy the doubtful lowete IOUs at a suitable...

A BIT OF A HITCH HUMPHRY SMITH I WAS hitch-hiking out of Cape Town. I had gone about twenty miles, and had another thousand to go. Cape Town — called the 'mother-city' by...

THE parties in Servia are beginning to pass all bounds. King Milan has recently suggested that his own favourite Minis- ter, M. Garashanine, murdered two girls in prison,...

The Greeks had a sword for it Stephen Spender R eading, during the last week of the Gulf War, this vivid, forward-moving trans- lation of the Iliad, it struck me that Homer...

Brighter than he seems

Jeffrey Bernard YOU'RE BARRED, YOU BASTARDS by Norman Salon, with Spencer Bright Sidgwick & Jackson, £14.99, pp.234 I didn't believe in ghosts until I read this book, but...

The hunt with a hole in it

Anthony Daniels HUNTING MARCO POLO by Paul Eddy and Sara Walden Bantam Press, £14.99, pp. 302 T he war against drugs seems to me a phoney war. It is obvious to all involved...

After every means has been tried — Nobility, cajolery, And talk from the shoulder all denied — There is, dear heart, one certainty: That suddenly the world lies wide With many...

A floor in the amber

Eric Christiansen PATTERNS OF THOUGHT: THE HIDDEN MEANING OF THE GREAT PAVEMENT IN WESTMINSTER ABBEY by Richard Foster Cape, £15.99, pp.2I4 h e year 1268 was not a bad one for...

Married to a single life

Not a very proper Charlie

• River of no return

Peter Vansittart DOWNRIVER by lain Sinclair Paladin, £14.99, pp.407 B illed as 'social surrealism', here is a Stygian metropolis within reach but, for most, never reached. If...

A serious but not solemn Gumbie Cat

Hilary Corke THE ART OF POETRY by Peter Levi Yale, £19.95, pp. 331 T he Oxford Chair of Poetry is one of those anomalous eminences that levellers love to level. The Professor...

No longer the lure of dizzy heights

Frederic Raphael A SENSE OF BELONGING by Howard Cooper and Paul Morrison Weidenfeld, £16, pp. 223 I s there a Jewish question, and can there be a Jewish answer to it? Tolerance...

Goon, but not forgotten

Music Thanks for the melody Peter Phillips looks beyond the hero-worship in Mozart's anniversary year 'Trio Mozart', 1983, watercolour by Michael Mathias Prechtl, from the...

The Twilight of the Tsars: Russian Art at the Turn of the Century (Hayward Gallery, till 19 May) Crepuscular charms Giles Auty L ast week's article was the first I have...

A work of wizardry Juliet Reynolds I n 1957, a passionate young archaeologist named V.S. Wakankar, a pioneer of Indian Stone Age excavation and analysis, was travelling along...

The Trial (Lyttelton) Map of the Heart (Globe) The Berkoff variations Christopher Edwards S teven Berkoffs production of The Trial is, as you may have gathered, more about Mr...

The sins of the fathers Gabnele Annan L ike its predecessors, Francis Ford Coppola's The Godfather Part III is a long, lavish, violent film about a far from nuclear...

Occasional inspiration Ursula Buchan T here is a certain sort of person who, when showing you courteously and thor- oughly around their garden, will stop before a neat circle...

Shining morning faces Martyn Harris T here was a moment near the end of Eton: Class of '91 (Channel 4, 9 p.m., Mon- day) when the camera slowed and the sound track was...

Sinking ship Taki oor Christina Onassis, the boat that is. Aristotle Socrates Onassis left her to an ungrateful nation, and the first thing the Greeks did was to change her...

Lift stick Zenga Longmore 'Ooh, there's someone in there and he doesn't seem to like it,' remarked an elder- ly woman, whom I vaguely recognised as a neighbour. 'Well, if he...

No more laughter Jeffrey Bernard T he saga of Renate, the woman from Vienna who chose me as the subject for her PhD thesis, is over. So is the joke. She is dead. I received a...

IT'S NOT often that I return to an already written-about

restaurant in these pages, but I wish to do so now on two counts. The first is that I have eaten here so much more regularly than in any other restaurant I have written about —...

F or the first time in 21 years total wine consumption in this country has gone into decline, but I am happy to say this does not apply to the Spectator Wine Club. The trade is...

I n Competition No. 1667 you were in- vited to contribute your own startling, or unstartling, medical 'discovery ' of the week as announced in a news report. Yes, sneezing does...

Dark Blues Raymond Keene I n the super-tournament in Linares, Spain, with just one round to go Vassily Ivanchuk, the only unbeaten player, has maintained his lead with 9/11....

You are invited to tell a contemporary anecdote in the style of Dickens's Mr Jingle. Maximum 150 words. Entries to 'Competition No. 1670' by 28 March.

For the thousandth crossword a celebratory prize of £100 and two further prizes of £10 (or, for UK solvers, a copy of Chambers English Dictionary — ring the word 'Dictionary')...

WILLIAM COBBETT had no knowledge of 'corporate hospitality', that new phe- nomenon at all our grand sporting events in which acres of flouncy marquees are given over to...