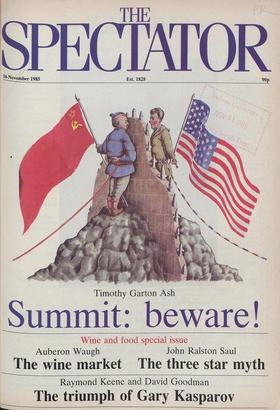 `She wouldn't wait while they dithered between a tunnel and a bridge.' r eparations for the Geneva summit accelerated, President Reagan telling the Russians in a direct radio...

`SO WHAT,' we are now constantly asked about every foreign hotspot, 'is the solu- tion?' What is 'the solution' in the Middle East, Central America, Eastern Europe? Will Mr...

SUNDAY SPECIAL PLEADING T he arguments over Sunday trading illustrate the difficulty that democratic politics finds in gauging public opinion. Almost all those who air the...

ALTHOUGH he is remarkably old, Lord Stockton may have embarked on his attacks on the Government a little too early in his career in the House of Lords. The spell-binding charm...

The curious humility of Mr James Callaghan FERDINAND MOUNT T here are two short cuts to the heart of the House of Commons. One is to say 'I'm sorry'. The other is to say 'I...

W hatever the real circumstances sur- rounding the return to Moscow of the Americans' prized defector Mr Vitaly Yur- chenko, the Russians can look upon the public image of the...

The professionals and housewives who could betray us all AUBERON WAUGH I have never been asked to serve on a jury but my pen-friend George Stern, fearless opponent of the...

For 40 years, miracles have been attributed to they can achieve more at Geneva if they promise less MATS oit sont les times d'antan? Where are the summits of yesteryear?...

Lord Salisbury, while speaking with doubt of the possibility of suppressing Irish boycotting, pledged himself, if the law did not suffice, to ask Parliament to extend it; but he...

Christopher Hitchens finds British royalty blamed for the woes of American imperialism Washington IN AMERICAN politics and journalism, there is a tactic or style known as...

A BRICK THROUGH THE WINDSCREEN

Stephen Robinson on the reaction of frightened whites to South African unrest Cape Town A COUPLE of weeks ago I found myself hitch-hiking into Cape Town on my return from a...

Richard West on how good socialist schooling could be, 50 years ago Bridlington THE heroine of Winifred Holtby's South Riding is Sarah Burton, a fierce, red-haired feminist...

Hans Kalmus recalls the last appearance of the comet WHEN I was a child in Austrian Prague, before the first war, the seasons were still orderly. Days were long in summer, as...

Nicholas Coleridge on the resistible charm of Bob Geldof The Albert Hall FASHION Aid last week was the eighth Aid to date, following on from Band Aid, Live Aid and sundry...

DESIGNS ON THE MARKET

Insiders: a profile of Sir Terence Conran, successful 'creative retailer' WHEN it was announced last week that the National Economic Development Office is to investigate the...

The press: Paul Johnson replies to a ludicrous slur WRITING a column about the media is not easy. In the first place, editors, pro- prietors and journalists — to say nothing...

Own goal at Lloyd's, and a hack on the referee's shins CHRISTOPHER FILDES owever touchy things may be in the City, someone will always come along with the means of making them...

NOT all of them saw why he needed to come. Even within the City, Lloyd's is something of a private world, whose citizens could be heard to say that their business — even if it...

IT WAS Sam Brittan who proposed a Society for the Abolition of Inconvenient Statistics. Nothing so crude for his old colleague Nigel Lawson. Before his 'au- tumn statement' we...

The captains of industry collect in Harrogate JOCK BRUCE-GARDYNE A utumn nowadays brings conferences as well as mists and mellow fruitfulness. You thought the conference...

T he first three winners in the nine-week Spectator Game of Consequences will receive outstanding prizes. The first prize is a valuable 18th-century aquatint of India engraved...

Sir: A propos of 'Sod the Public' (Kingsley Amis, 19 October) the following six words chalked large on a blackboard at Bank Station the other day: NO PHONES NO CHANGE NO...

Sir: It is unusual to watch a reviewer straining all his intellectual resources to damage the good name of his subject and only succeeding in damaging his own. I have not read...

Sir: Pace the agonisingly arch Kenneth Rose (Arts, 9 November) Diana Cooper has never repeat never been heard to refer to Harry Cust as 'Papa', which is how she quite naturally...

Sir: Following the rhetoric in your editorial 'Mr Fowler weakens' (26 October) there is a need to set the record straight. In our response to the Green Paper proposals on...

Sir: Your diarist, Max Hastings (9 Novem- ber), is not only out of date, but also historically offensive to the French if he attributes to them today 'a spirit of Vichy'. Mr...

SUBSCRIPTION RATES TO GO UP ON DECEMBER 1 Subscribe now at the old rates and save up to 25% on the retail price (equivalent to 3 months FREE) I enclose my cheque for f...

U nlike Rupert Brooke, John Corn- ford, Richard Hillary, each of whose tragi- cally broken-off lives suggests the final chord of the prelude to a composition never written — a...

Responsible for Amin and Milton Keynes

The raked-out coals are glowing in the hearth, Crisp, cokey, light,,they jingle on the grate Like tiny chimes blown by their own last heat. The chimney draws-their music up; its...

The shape of things before

Peter Levi GREEK AND ROMAN MAPS by 0. A. W. Mike Thames & Hudson, E18 A ll my life I have longed for a proper, reliable book about Greek and Roman maps, the evidence being...

How could you? Patrick Skene Catling THE LIVES OF LEE MILLER by Antony Penrose Thames & Hudson, £16 I t was kind of Antony Penrose, Sir Roland Penrose's son, not to write...

Francis King MITFORD'S JAPAN edited by Hugh Cortazzi Athlone, £18 M itford's Japan? No, not an account of how Hitler despatched Unity on a secret mission to General Tojo, of...

Neither obscene nor pornographic

S ome two weeks ago a large plane took off from London Heathrow — direction Washington — carrying in it a fair section of our very dear landed class. Across the Atlantic went...

Five Play Bill (National: Cottesloe) Heaving and gushing Christopher Edwards O ne of the consequences of reviewing lots of productions seems to be a gradual extension of...

A Letter to Brezhnev ('15', selected cinemas) Fantasies of elsewhere Peter Ackroyd M ost of the short films which accom - pany the main 'feature' in the course of a cinema...

The Achievement of a Connoisseur: Philip Pouncey (Fitzwilliam Museum, Cambridge till 15 December) Only an eye D avid Ekserdjian T his country has led the world in the...

A question of familiarity Peter Phillips B efore reviewing some records I would like to refer to a letter which a reader sent me on the subject of Peter Philips. In my article...

Political people Alexander Chancellor S omewhat to my relief I find that the jacket of my bargain off-the-peg grey flannel suit has four buttons on each of its cuffs. Four...

The power and the influence Taki took the shuttle down to Washington DC and it was like old times. Full of women who think Bill Blass is a far greater man than, say, Alexander...

Suitable for children Alice Thomas Ellis I went round the shelves today to remind myself of precisely what we have to offer in this line and decide whether they are all too...

Little irritations Jeffrey Bernard I t is five weeks now since I was invalided out of Soho and the days are beginning to drag. Even the telephone has stopped ringing and it...

Mentioned in dispatches P. J. Kavanagh ecause it is exciting and coloured and will be forgotten next week, and because it happens so rarely — about once every ten years — and...

I am not talking about the premiers crus of Medoc and Graves, or the three great names of St Emilion and Pomerol, or even the better known Brands crus of Burgundy. These have...

Faith in the stars John Ralston Saul All of this may well be true, but for most people a three star restaurant is just a good meal. They are wrong. These 19 eating places are...

Degrees of effervescence Ausonius I have had my doubts about champagne. At times I have wondered whether the medium, the symbolism of luxury, the gold foil, the label, the...

Mr World Raymond Keene (London) David Goodman (Moscow) G ary Kasparov, at 22, has become the youngest world champion in the history of the game. His nerves held for the 24th...

Solution to Crossword 731: Ambiguity The related lights (in the

You are invited to write a poem (maximum 12 lines) in English but in a Latin metre (hexameters, elegiacs, sapphics, alcaics etc, but please state which). Entries to `Competition...

I n Competition No. 1395 you were asked to describe for a newspaper a sedentary game in the parlance usually reserved for Violently physical ones. Last week Karpov's 'almost...

A first prize of £20, together with a `Screwpull Spinhandle' corkscrew, and two further prizes of £10 (or a copy of Chambers Dictionary, value £11.95 — ring the words 'Chambers...

T he next, and last, offer of the year, in a fortnight's time, will be our traditional Christmas bash at Berry Brothers' surviv- ing old burgundies. At present it looks as if...