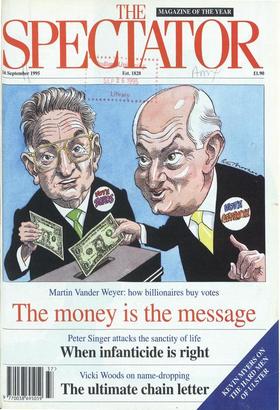 M r David Trimble, MP for Upper Bann, was elected the new leader of the Ulster Unionist Party. In Dunloy, County Antrim, there were riots when 200 Orange- men on their way back...

You can't have a 'revolutionary new policy agenda' from the middle of the road BORIS JOHNSON Y ou can't exactly blame Philip Gould for his ludicrous plan for a Labour victory....

RICHARD LITTLEJOHN S enator Bob Dole has outraged multi- culturalists in America by insisting that English is the bedrock of western civilisa- tion and must be recognised as the...

Is my loved and respected brother-in-law determined to make a fool of himself? AUBERON WAUGH H ow tetchy our art experts become when those who have no qualifications to...

Martin Vander Weyer examines one of the odder phenomena of the 1990s: billionaires who masquerade as political gurus TYCOONS, at a certain point in their careers, seem to feel...

THE OFFER of philanthropic Britons to reduce their own rations in order that more food may be sent to liberated Europe does credit to those who make it, but I am not sure it is...

persist.. . IT IS by reflection on the small phenom- ena of the universe that we are led insen- sibly to the profoundest truths. That is why the study of trivia is not itself...

WHY O.J. SIMPSON SHOULD WALK FREE

Andrew Stephen argues that the prosecution in America's most notorious murder trial has signally failed to prove the guilt of the accused Washington FOR THE PAST several months...

THE JIHAD HAS COME TO FRANCE'

ecution can't afford to deviate from the provable truth.

But now we know that they did exactly this even before the trial began. Ms Clark and her colleagues knew all along of Mark Furhman's unstable background. In 1981, the...

WHAT YOU SEE IS WHAT YOU GET

Kevin Myers analyses the tribal markings of Mr David Trimble, the new leader of the Ulster Unionists Dublin THERE IS a certain sort of Ulster Protes- tant you ignore at your...

Peter Singer, author of the entry on Ethics in Encyclopaedia Britannica, applies his own brand of morality to abortion IN HIS recent encyclical, Evangelium Vitae, Pope John...

THE MOTHER OF ALL CHAIN LETTERS

Vicki Woods finds herself part of an unbroken link stretching from the Palace to a bookie's in Bloomsbury CHAIN LETTERS are notoriously mad, malignant and mailed by lunatics....

CAN YOU stand a little more of who/whom? Mr Huw James writes to say that he was taught at school that there were only two grammatical errors in the Bible. The one he can...

The act of painting is a series of tricks, whether you are Turner . . . or Johnson PAUL JOHNSON W ith trepidation I await the opening next week of an exhibition of my water-...

Not very bright, out of his depth, and bent Leeson books his one-way ticket CHRISTOPHER FILDES W e are taught to show pity for all prisoners and captives, and I am sorry for...

Sir: Vitali Vitaliev's article (The Russians are not coming', 26 August) struck a chord. Five years ago, I first visited Carnforth by train. The station was a picture of unre-...

Sir: Gavin Stamp's memory is playing him false (Arts, 26 August). Edward Watkin had nothing to do with the construction of the railway between Blackfriars and Far- ringdon. It...

Sir: Rupert Christiansen's article (Arts, 9 September) is so peppered with errors of fact that it would consume many column inches to correct. Your readers will doubt- less have...

Sir: I think you misunderstand the nature of the News

of the World. Of course such papers have always sold sex by disapproving of it. But most of the editors and their underlings share a genuine disapproval of sexual liberty. To be...

Sir: Isn't it true that the British are just hope-

lessly bad at sex? Half the population thinks it is naughty but nice (an adolescent view), and the other half thinks it is a loathsome disease, caught at puberty (the puritan...

LETTERS Sex and the British

Sir: Your leading article (9 September) cas- tigates the News of the World over our cov- erage of the Charterhouse head's associa- tion with a prostitute. Can I point out that...

Sir: Kingsley Amis is right (Letters, 9 September) to scorn those who can't han- dle a naughty sound, even when it appears only as a syllable of a longer word with quite other...

We are not cowards

Sir: Officers in today's German army are not cowards — much less the one I cited at the beginning of my article on the Bundeswehr (Tear of fighting', 19 August). In my inter-...

Sir: In your issue of 2 September, you pub- lished an article under the heading of `Beware of Greeks bearing degrees' which looked at franchising agreements between United...

Sir: I was intrigued to see on the cover of The Spectator (2 September) that the explo- sive batting of Brian Lara is based upon e = mc 2 — an equation that tells us of the...

Sir: Michael Sissons accuses the RSPCA of `trumpeting vegetarianism'. Such a stance would be a peculiar policy for the Society when in fact the RSPCA, as the world's leading...

Like Adolf Hitler, General Colin Powell will go far on the strength of an autobiography SIMON JENKINS W onderful news. The next president of the United States of America is to...

Our island story continued Raymond Carr ADVENTURES WITH BRITANNIA edited by William Roger Louis I. B. Tauris, £24.50, pp. 256 E t books are fashionable. Displayed in their...

Slow to begin and never ending

Francis King THE SIREN AND SELECI 'hD WRITINGS by Giuseppe Tomasi di Lampedusa Harvill, f14.99, pp. 185 N . doubt in part because its author was both Duke of Palma and Prince...

From the killer's point of view

Brian Masters SO LITTLE DONE by Theodore Dalrymple Deutsch, f8.99, pp. 144 T his engaging and mischievous book, short but by no means slight, purports to be the testament of...

Weigh thy words in a balance

P. J. Kavanagh THE REDRESS OF POETRY by Seamus Heaney Faber, £14.99, pp. 196 T here is a luminosity about this book which justifies its rather mysterious title. It sets out to...

Loved him, hated her

Death, in passing, called on you today Hoping to have a friendly word, no doubt, But couldn't reach your bed for the array Of electronic gubbins ranged about. But doubtless...

The way is all so very plain

Jonathan Keates MORTAL SINS by David McLaurin Duckworth, £14.99, pp. 250 I n the days, now long gone, of the land- lady and the boarding house, a selling- point calculated to...

What a little devil

Bruce Bernard MAPPLETHORPE by Patricia Morrisroe Macmillan, £20, pp. 320 I agreed to review this book because I met Robert Mapplethorpe in 1979 and I liked him. I saw him three...

Juliet Townsend VICTORIAN FICTION: WRITERS, PUBLISHERS, READERS by John Sutherland Macmillan, £35, £12.99, pp. 191 I t is difficult to weld into a cohesive whole a book which...

It is, often said that Bonnie Prince Charlie got as far as Derby in his invasion of 1745. In fact he reached Swarkestone, some nine miles further south. J. G. Collingwood, The...

Katherine Gerson THE GARLIC BALLADS by Mo Yan Hamish Hamilton, £15.99, pp. 290 T e one thing that really puts the wind up in Peking is the possibility that the peasants may be...

Exhibitions Making the invisible visible John Spurling welcomes a serious revival of private patronage ti ter Moores' claim that 'over half the population of England live...

Your greatest fan Alistair McAlpine S otheby's held a most unusual sale on 13 September. I quote from their press handout 'the contents will go on view in the manner of a...

Gangster No 1 (Almeida) The Steward of Christendom (Royal Court) Michael Feinstein (Comedy) An Affair to Remember (Pizza on the Park) The history plays Sheridan Morley I n a...

Dealing in pounds Nigella Lawson O ne of the most striking things to have emerged about Nick Leeson from The Man who Broke the Bank (BBC1, Monday 10 p.m.) is how like Prince...

Speeding to see you Alan Judd T he much-publicised experimental speed restriction on a section of the M25, designed to ease congestion, shouldn't be necessary. There must...

Solid stuff of politics Taki Gstaad A Greek newspaper, the Independent Press, has reported that Greek Prime Min- ister Andreas Papandreou is incontinent and is obliged to wear...

Spare me the pain Jeffrey Bernard I am not quite sure what to think about doctors. I have been in hospital so many times since 1965 when I had my first attack of pancreatitis...

Kind face kind heart Carole Morin A untie Irene the Slut was trapped in an elevator with Steve McQueen when he was alive. She called long distance to tell Maddie, who didn't...

Enlightened travels Nigel Nicolson 0 ne of the pleasures in reading old travel books is to discover how little the best things in life have changed. Ponies were gambolling...

Luckless Andrew Robson ALL TOURNAMENT bridge uses the duplicate principle, whereby each deal is played at every table in the event. Whilst the excitement at picking up a good...

Interesting, unusual and worth trying Auberon Waugh T he first offer from Percy Fox & Co. in the wine club's 12-year history follows one of the most enthusiastic tastings I...

Cheap at half the price

LiaL,10L HAVING JUST returned from my annual outing to Cumberland it is entirely appro- priate that I mention the feast day of St Ninian which falls on 16 September. Nini- an's...

Per ardua ad Gazza Raymond Keene TWO YEARS AGO Garry Kasparov (popularly known as Gazza) and Nigel Short broke away from Fide, the World Chess Federation, to play their own...

J SISGU YUI 7(mo ISLE OF 10 sISLIE Ull kOltli•111511 COMPETITION Missing life's bus Jaspistos IN COMPETITION NO. 1898 you were invited to supply extracts from the journal...

1227: Summit meeting by Doc A first prize of £25 and a bottle of Graham's Late Bottled Vintage 1988 Port for the first correct solution opened on 2 October, with two runners-up...

Dear Mary. . Q. I have just moved into a small abode in a quiet London street where the neighbours say hello and the dustmen come twice a week. I like to read and write there...

Dullness elevated to a principle Simon Barnes BLACKBURN ROVERS stand for all that is good about English football, so naturally, when I went to watch them last Saturday I was...