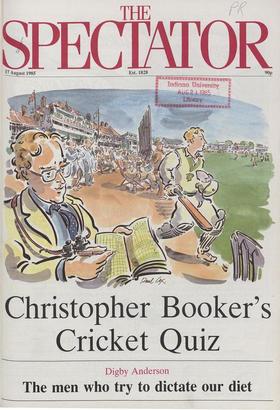 I n South Africa, violence spread to Indian and black townships outside Dur- ban, blacks attacking Indians and blacks. At least 66 deaths were reported, including some black...

IN SORROW, but also in anger, we advise our readers no longer to attempt to travel on trains `operated' by British Rail: in sorrow, because our instinct would be to Urge people...

THE TOURIST TRAP I t is — at least according to the calendar --- summer, when the middle classes flee to Tuscany or the Dordogne and leave Britain to the tourists. London is...

IT IS with great sadness that we record the sudden death on Tuesday of Shiva Naipaul. Mr Naipaul, who was 40, was one of the finest writers of the present time and one of the...

This week, the price of the Spectator increases to 90

pence. This is the first increase for more than two years and is made necessary by the pressure of inflation which, despite Mrs Thatcher, does not seem to weaken. We hope that...

Mrs Thatcher takes her pruning shears to Austria BRUCE ANDERSON G uns out on the grouse moors; the Prime Minister in Austria: it must be the the silly season at last. Away...

O ne way of getting into hard covers is to be thanked in the Acknowledgments for providing literary digs. 'Much of the book was written in the houses of friends,' as Geoffrey...

Auberon Waugh will resume his column next week.

THE MEN WHO MARCH ON OUR STOMACHS

Rigby Anderson on the futility and danger of the state deciding what people ought to eat GEORGE'S doctor has referred him to a dietitian. George and the dietitian have a...

DEALING WITH THE ZULUS

Stephen Robinson on a growing force in South African struggles Cape Town IN THE past year South Africans have become almost immune to bad news, but the outbreak of violence in...

John Ralston Saul on the problems of unclothed greetings St Tropez IT HAS become increasingly common over the last decade to see women on beaches wearing a single postage...

DRAWN BY THE SOUND OF GUNS

Survivors: A profile of Peter Kemp, veteran of many wars DEEP in the rain forests of Central Amer- ica, where Nicaraguan Contras are making war on their own Marxist government,...

The press: Paul Johnson on discrimination against homosexuals NOW let us turn to a genuine case of would-be censorship, this time by the Press Council. I lost faith in this...

THE Prime Minister is away on her holi- days, leaving Lord Whitelaw in charge. He, though, will soon feel that strong gravitational pull which draws sporting noblemen northwards...

THE winners from Britoil, like the winners from Telecom, are the licensed dealers in securities, outside the Stock Exchange. Private investors who got any Britoil shares at all...

City pages suffer the fall-out as Tiny goes to war CHRISTOPHER FILDES I agree with what. Tiny Rowland says, and I would defend to the death, though I hope no one asks me, his...

NOW on offer: a unique opportunity to go into business with some of the most in- famous characters in Singapore. The words are those of the Singapore government, whose tourist...

1) Captains Which England Test captain 1) hummed themes from Beethoven's Opus 59 at the wicket? 2) was recently fictitiously portrayed hav- ing an affair with a lady...

Sir Michael Hicks-Beach was waited upon on Monday by a Bristol deputa- tion to urge the claims of women to the franchise . . . After stating that he had been opposed to women's...

Sir: I read Christopher Hitchens's article on Canada (3 August) with concern and sympathy. Canadians may be consoled by the reflection that theirs is not the first country to be...

Sir: Until I read Mr Wilson's letter (10 August), 1 had always assumed that Ti- tian's masterpiece, the Assumption, in the Frari in Venice, had been painted some time before...

Sir: Stephen Robinson makes some perceptive points and presents an

interest- ing point of view in his article on South Africa (27 July). Unfortunately some of his supporting facts are wrong. Business Day did not argue that President Botha's...

Sir: I do not wish to detract in any way from the records of 'Sir' Peregrine Wors- thorne or Bernard Levin (Survivors, 27 July), but for the record I should point out that I was...

Sir: We, as Officers and Gentlemen of the Royal Navy

Sir: I hereby request you to immediately suspend and cancel my subscription to the Spectator and reimburse me for the re- maining part of it. The reason? . . . I have been...

Colin Welch is on holiday

V isitors to the show of Venetian loot at the British Museum last year may have been impressed by an object of supposedly seventh-century date and Byzantine manu- facture. It...

Patrick Leigh Fermor A GREEK EXPERIENCE 1943-1948 by Nigel Clive with an introduction by William Deakin Michael Russell, £9.95 Here roams the wolf — the eagle whets his beak,...

Ambiguity and unpredictability of law

Oxford poets then and now

Elizabeth Jennings FIRST SET: BLUE JADE introduced by Christopher Logue Lthanus Press, £4.95 I t is sad that Blackwell's have had to discontinue their generous tradition of...

Now it is fifteen/twenty-five/fifty years (tick the applicable box) Since we were plundered/raped/tortured/burned Or otherwise maltreated (ring the relevant entry) And again we...

The final Hitch was to be sexy

Brian Martin THE CAPTAIN'S LADY by Ronald Morris Chatto, £10.95 I f you have ever wondered what Fellows of Oxford or Cambridge colleges get up to in their sabbatical terms,...

A selection of recent thrillers

You were an easy rhyme once though a virgin, Until you were violated by a golfer. You used to drive me mad at regular intervals, But now that happens less predictably. To...

M any visitors to this year's. Edinburgh Festival are likely to be dismayed by the vulgar flyposting of the city that has taken place since last summer. Princes Street and most...

Day of inaction Noel Malcolm W hen a famous mediaeval historian gave his inaugural lecture as a professor at Cambridge, something strange happened. After about an hour,...

Insignificance (`15' , Odeon Haymarket) Time after time Peter Ackroyd I t is always difficult to know what Nico- las Roeg will do next; with such films as The Man Who Fell to...

Tracers (Royal Court Theatre Upstairs) The Seagull (Queen's) Men of war Christopher Edwards H ere is a production about the Viet- nam war that is worth serious attention...

Acts of television Alexander Chancellor A part from that, Mr Young, Mr Milne et al, how did you enjoy the play? I didn't enjoy it terribly. One of the reasons for this was...

The fatherland Taki Zante a nteante is the most southerly of the Ionian islands, north-west of the Pelopon- nese and the nearest point to it, a little less than ten miles...

Rainy-day blues Alice Thomas Ellis T his is getting beyond a joke. I am plunged in the depths of Siberian melan- choly and so is everyone else. My friend Caroline and I have...

A friend indeed Jeffrey Bernard I t may be more difficult to make new friends as you get older but it is some consolation to know how easy it is to lose them when you are...

J on Speelman kept a firm hold on the lead in this year's Grieveson Grant British Championship in Edinburgh. He was never in danger of losing and played some truly deep and...

I n Competition No. 1382 you were asked for a classified matrimonial advertisement on behalf of some famously unattractive fictional character. When Lord Horder set this...

by Covent Garden. The whole 'Garden' project is a lesson in the unwholesome power of the public relations officers. Everyone is told that the place to meet/see/be is Covent...

In a recent Spectator Christopher Hitchens Imagined 'a list of articles which a maga- zine would have to run if it did not desire to Outlive one edition'. You are invited to...

The first two wines are in plentiful supply, in any case. Avery's shop around for their famous white house Burgundies, and it should not surprise us in the least that in 1983...