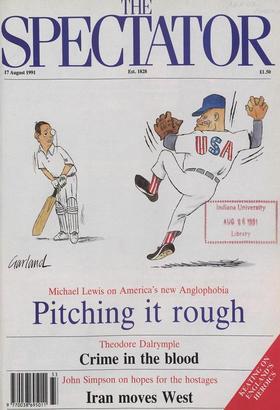 Light at the end of the tunnel M r John McCarthy was freed after five years of captivity as a hostage in Lebanon. He confirmed that Terry Waite is still alive. Mr Kenneth Baker...

N ow, who was I being faithful to at the time? . . .' Conversation overheard in cafés abroad is somehow so absorbing. One feels entitled to listen in, even to stare, as we...

Useful things to be done with a bare bodkin AUBERON WAUGH as it less than a fortnight ago — on 4 August — that we were all celebrating the Queen Mother's 91st birthday? I say...

NOT ANGELS BUT ANGLOPHOBES

Michael Lewis finds that Americans are getting tired of Old World snob appeal and the rudeness of English manners THERE is plenty of evidence that Ameri- cans remain...

THE ART OF THE DEAL

John Simpson on the unlikely sources of hope for the hostages — Iran and Iraq SITTING on cushions and reaching from time to time for more food from the plates laid out on the...

THE BULLY OF THE BALKANS

Matt Frei on the self-appointed national saviour of Serbia SLOBODAN Milosevic, `Slobo' to his friends, once smiled at me. He was leaving a five-hour meeting with students at...

THE Cape Town correspondent of the Times, telegraphing on Monday, states that Mr. Bent's examination of the ruins of Zimbabye has already begun to pro- duce results. The great...

A reader was given this leaflet: Dear Friends: They say we should say where we are and describe the miracle that is Wester Ross but how can we when it doesn't exist until you...

MOSQUITO IN THE OINTMENT

Anthony Daniels examines how medical advances have been infected by nationalism IN 1955, the Cuban dictator, Fulgencio Batista, protested against the American television quiz...

or over £30 on The Spectator If you're forced to share The Spectator with fellow students, then you'll know how difficult ft can be to track a copy down. Now you can save...

Ian Buruma talks to the liberal who could become Emperor of Ethiopia HIS writing paper bears the royal crown of Ethiopia, last worn by Ras Tafari, or Haile Selassie, the last...

THE INVASION OF EUROPE

Robert Fox on the threat to the First World by uncontrolled immigration from the Third ANYONE doubting the problem posed to European Community countries by mass immigration...

I remember reading some years ago a book by Hans Eysenck, the prolific psy- chologist, in which he suggested that criminality was hereditary, like haemophilia. In those days,...

ALL THE NEWS FIT TO PRINT

The press: Paul Johnson comes across a newspaper of the old breed AFTER ten years of writing a media col- umn, I remain more convinced than ever that the most estimable form...

ROBERT Maxwell, Nigel Lawson and I are all victims of girthism — a form of prejudice which is disagreeable when abu- sive, but can be more wounding when kindly meant. A striking...

Good name for a dog

GENERAL Accident is a good name for an insurance company which loses £101 million in six months. Here come the five big general insurers to report their half- yearly figures,...

Franchise for the Bank

BONAR Law as Chancellor settled an argument with the Bank of England by threatening to take the Government's account away and give it to the Midland Bank. Earlier Chancellors...

THE oddest contribution to this debate is the suggestion — seriously put forward this week in support of an independent Bank of England — that it doesn't much matter whether the...

Sir: In the Alastair Forbes review of Bob Boothby by Sir Robert Rhodes James (27 July), he insinuates, as he has often done before, that my grandfather, Lord Ran- dolph...

Fudge abounds Sir: I look forward with relish to reading The Spectator each week, not least because of the column by that most accurate and perceptive of political commentators...

Sir: I am flattered that P. J. Kavanagh should have such vivid memories (3 Au- gust) of a class of mine he attended some years ago at this Department during his service on the...

Sir: I am not sure that you are right in condemning the use of 'surprise' as an adjective (Diary, 3 August). Does it not have a distinct meaning of its own, suggest- ing that...

Sir: Paul Johnson writes (27 July) that 'the recent restructuring of the Independent . . . was decided regardless of what the staff felt and with only the feeblest of protests'....

Sir: Is not Mary Killen another pseudonym of the author of the Wallace Arnold column? The imitation of familiar sources is achieved with an equal ration of merit by both. B. A....

Sir: Following the discovery of a reference . in Aeschylus to the misfortunes of the previous Member for Billericay, which you kindly printed a year or two ago, may I offer you...

LETTERS Canton and on

Sir: Who is Caroline Sinclair and how long has she been in Switzerland? (The secret! police state', 27 July). Or, perhaps more to the point, how much has she learnt about the...

WE ARE happy to point out that Caroline Sinclair, author

of the article 'The secret police state' (published 27 July) is not the same Caroline Sinclair who has since 1984 been Honorary Secretary of the British Residents' Association...

There is a brain tumour loose in the land. Early this summer I watched the ceanothus Forming tiny stars, sketched in black ink Like a meticulous message: Think neatly. June...

Francis King h e problem faced by any biographer of E.F. (Fred) Benson is that the life was the writing, and that the writing for the first three-quarters of the life was...

Ought to know better by now

Malcolm Deas SELF-PORTRAIT OF THE OTHER: A MEMOIR by Herbert Padilla Faber, £11.99, pp. 247 GUERRILLA PRINCE: THE UNTOLD STORY OF FIDEL CASTRO by Georgie Anne Geyer Little,...

Art is a jealous mistress

Kathy O'Shaughnessy A ma Mahler grew up an artist's daughter. Her father was the gifted painter Emil Schindler, who noted gloomily in his diary: 'I must live among men, however...

Starting at the bottom

James Hamilton THE WOOD-ENGRAVINGS OF BLAIR HUGHES-STANTON by Penelope Hughes-Stanton Private Libraries Association, £45, pp. 183 O ne of the most refreshing qualities of...

Frederic Raphael HELLENISM IN LATE ANTIQUITY by G. W. Bowersock CUP, £19.50, pp.121 hat is Hellenism? When did antiqui- ty lapse? Who cares? The questions are important, in...

Dividing asunder of All Souls and spirit

Peter Levi HIDDEN JOURNEY by Andrew Harvey Bloomsbury, £14.99, pp.240 A ll Souls is a pinnacle which is usually attained awfully early in life. Some people get bored with it....

A poet who wanted to be a journalist

John Whitworth COLLECTED POEMS 1980-1990 W hy is it not Sir Gavin Ewart? He is old enough; he has written enough; he hasn't done anything awful like going to live in America....

Roy Dean T he 50th anniversary of the death of Virginia Woolf this year has generated fresh interest in the life and works of the revered prose stylist. More readers will be...

Art Compulsion by calendar or curators? Giles Auty examines the pressures on artists to conform O ne of the odder beliefs of our time, which has played host to quite a number,...

Under the spell of Mendelssohn Peter Phillips W have not heard so much recently about those wicked tiles which were said to fall off the Albert Hall to the great incon-...

Designing Yourself? Creativity in Everyday Life (Design Museum, till 15 September) Showing what we can do Tanya Harrod T here are problems about visiting the Design Museum...

In spite of all temptations Ursula Buchan L ast spring, whilst walking on one of the fells by the side of Ullswater, I found a primrose with yellow and green variegated...

Cruising for a bruising Taki ohn Latsis, the tycoon who has put the ferry-boat turned luxury yacht at the dis- posal of the Prince and Princess of Wales, is known for his...

A frog in my throat Martyn Harris N atWest returned my weekly Spectator cheque last Friday, pointing out I had for- gotten to sign it on the back and remark- ing, just by the...

Waiter- Jeffrey Bernard D id you know that carrots originated in Afghanistan around 500 BC and that an actor playing Hamlet has 1,569 lines to learn? Neither did I until I was...

Doomed by Darwin Zenga Longmore 0 malara's favourite new word is 'bit', a word she uses in a judicious tone of voice which sounds most odd in a two-year-old. 'That's a bit...

Cheap 'n' easy summer drinking Auberon Waugh T his month's offer has been specially geared to cheap summer drinking in defer- ence to all the rumours of poverty one hears,...

Ace of Tromps Raymond Keene I t is surprising how often specialisation in an unusual opening can turn out to be of deadly effect in a tournament. I remember that when I won...

You are invited to present a curriculum vitae from an eager, entirely unsuitable candidate for a responsible post. Maximum 150 words. Entries to 'Competition No. 1692' by 30...

Stumped for a souvenir Frank Keating IT WAS a Test match of splendour. One for the archives. England's victory to level the series at 2-2 put a lustrous tin lid on an already...

Q. How does one best cure the condition of 'roving trotters'? I enjoy cooking and having people to supper but find my hackles rising when certain friends come into the kitchen —...