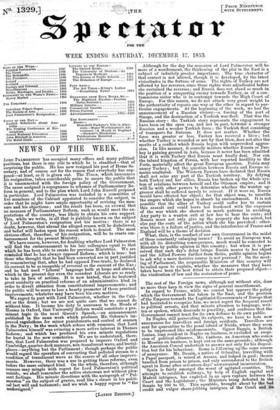 be more of a wonderment, the thickenin g of the plot in the East is a sub j ect of infinitely g reater importance. The true character of that contest is not altered, thou g h it...

The rest of the Forei g n news, althou g h not without stir,

does no more than keep in view the si g ns of g eneral unsettlement. In re g ard to France, while we cannot bat approve the policy which the Government has taken in the East,...

Loan Paramisrow has occupied many offices and many political positions, but there is one role to which he is steadfast—that of surprisin g the public. He has now resi g ned his...

From our own Colonies, the ce is anareeLy-lem stirring,

though it is upon the whole more hopefuL From Australia we have reports which show a continued expansion of her productive industry, her gold-fields, and her commerce, while the...

The City Commission sat on Friday the 9th, but, for some cause un- explained, it did not meet on Tuesday. The evidence taken last week was of a miscellaneous and uninteresting...

'60 Curt THE Queen is still at Osborne. Her Majesty,

Prince Albert, and the children, take their customary exercise. The Duke and Duchess of Brabant left Osborne on Monday ; travelled by special train to Dover; and there embarked...

The Vice-Chancellor of Oxford University received, on Thursday, through Lord Derby the Chancellor, a letter from Lord Palmerston stating that the subject of University Reform...

The report that "a large body of troops is under immediate orders embark in steamers at Cork for the Mediterranean" has been again Or' rent at Dublin. "The 1st of January is the...

• :A - publk-meeting of the friends of national education is to be held in • Ediriburghin-tlie beginning of January ; Lord Panmure in the chair. The flrst winter exhibition of...

FaAxez.—The number of political arrests forms the chief feature of the French news. On Friday many persons were apprehended; among - them twenty-two journeymen tailors belonging...

A circular has been issued by the Admiralty, signed "B. Osborne," and forwarded to all commanders-in-chief, captains, commanders, and commanding officers of her Majesty's ships...

On the Bth December, at the Rectory, Tooting, the Wife of the Rev. R. W. Greaves, of tzdaughter. On the 8th, at Walwyns Castle, Pembrokeshire, the Wife of William Webb Follett...

SATURDAY. THE NEW HOME SECRETARY. The Times understands "that the Cabinet will meet today to consider the steps that must be taken to supply the :vacancy so suddenly and un-...

The cholera has been making sad ravages among the inhabitants

of Red- ruth in Cornwall, where the disease broke out with great virulence a few weeks since. The epidemic is confined chiefly to the dirtiest parts of the town, where the...

The prediction that grain will be considerably dearer before Christmas,

which was laughed at by most people a few weeks ago, does not seem quite so unlikely this week. The presence of a number of Continental buyers at Mark Lane yesterday gave a...

The increased urgency of affairs in the East, coupled with

the new animation likely to be given to public affairs at the opening of the year by the Reform Bill movements in the Ministry, and the stimulus which a harsh winter always...

The Court of Session, at Edinburgh, gave judgment on Thursday

in the case of the Emperor steamer. We formerly mentioned, that a company had started a steamer called the Emperor, to run in the Clyde on Sundays during the summer season : it...

STOCE EXCHANGE, FRIDWf ATTER/100N. The intelligence of the destruction of a portion of the Turkish fleet by the Russians produced little sensation in the English Stock Market...

The latest accounts from Constantinople, received by the Vienna papers

of yesterday, announce that "the Turkish Embassy has received advices warranting the conclusion that the combined fleets have now entered the Black Sea, to prevent further...

The passage of a subject from the shelves of the library to the boards of the theatre seems to be the order of the day in France. We recorded very recently the fact that M....

The stagnation in theatrical productiveness, which usually precedes the Christmas holydays, is the characteristic of the past week. However, those who have seen Mr. Robson at...

Among the projected marvels of the Sydenham Crystal Palace, we are, it seems, to have a monster-organ, such as the world never heard or saw. A Committee, appointed by the...

THE SOCIETY OF ARTS. -

Mr. Mechi delivered on Wednesday his -third statement of the results of his doings at Tiptree Hall Farm ; marked by a goodhinnouredly plea- sant dogmatism, ardour, and...

ENGLISH SOLICITUDE ABOUT AUSTRALIA. IT is true that the latest intelligence about Australia is of "ex. trerne interest," and is well calculated to excite serious solicitude....

[Front the Tinier, Dec. la.] "Wricount'Prilmerston has tendered his resignation of the office of Secre- tary of State for the Howe Department, and has therefore ceased, within...

THE COMING CONFERENCItaAleillIRMINGHAIC BIRMINGHAM is 'decidedly endeavouring to recoVer its

leod in re_ form movements. The conference which is ' tel be held there on Tuesday next, to promote the reformation of jhvenile offenders, imparts a more extended character to a...

AMONG the many interests contingent upon the trade in corn, we do not remember that any Protectionist instanced the remunera- tion for Scotch schoolmasters under the...

Anrenrea. has a curious way of treating her visitors. Several classes are prepared to take advantage of the opportunity which presents itself with a new corner: there is sure to...

THE UNIVERSITY OF DURHAM: ITS DEGREES IN MEDICINE.

Cambridge, 13th December 1853. Smt—I wish, with reference to your leading article of the 10th instant on the University of Durham, to call your attention to the effort of the...

IN this country as well as America, substantial improvements sometimes begin in a literary form ; and the little square volume —a more intensely salmon-coloured companion of...

THE OXFORD HEADS. Oxford, 10th December 1853. Sin—After eighteen months of labour, the mountain has brought forth. The Committee of the Hebdomadal Board has issued its report,...

1 Adam Street, Adelphi, 12th December 1853. Sin—Wandering over the globe, and with the head-quarters of their leaders in London, a class of men exist, exiles from their native...

THE A.BUSES OF PUBLIC SCHOOLS.

SIR — TOUT correspondent "Sagittarius" seems to have "supped full of horrors," and taken his uneasy dream for reality. It is impossible to con- tradict his story about the young...

The Beauchamp Tower has been lately restored, under' tb& direction of Mr. Anthony Salvin ; and some of the records graven on its stones are now first recovered. The present...

THE ART UNION. We have before us the "Seventeenth Annual Report of the Council of the Art Union of London"; into which we dip for a few particulars. Stanfield's "Tilbury...

This volume aims high both in substance and in form. It tells the life of Luther in designs illustrated by brief biographic descriptions, and after- wards in a longer and...

County of Middlesex, Printer, at the oiliest of Yours Ctarron, No. IS, Crane Court, in Ike Parish of St. Mu , stan's to the West, in the City of London; and Published by the...

MANSFIELD PAREYNS'S LIFE IN ABYSSINIA. * ALTHOUGH Mr. Parkyns resided for three years in Abyssinia, travelling during his sojourn over parts of the country hitherto but little...

and its history in the guise of an individual life. The memoirs of Major Worthington contain the military , and sporting adventures of an officer in the Indian service, from his...

MONTH IN ENGLAND. * MR. TucimaLuir is an American, who seems

to have landed in Liverpool, made London his head-quarters, and used the railways to run freely about the country. In this mode, he truly observes, much may be seen in a month....

IT was the "belief" of Johnson, that there is in every nation a style so "consonant and congenial to the analogy and principles of its respective language" as never to become...