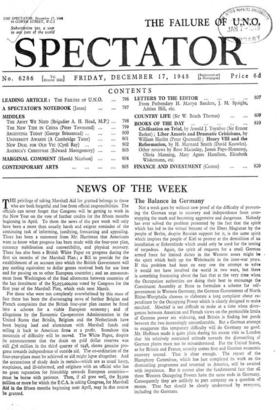 T HE privilege of taking Marshall Aid for granted belongs to those who are both forgetful and free from official responsibilities. The officials can never forget that Congress...

The Balance in Germany

Not a week goes by without new proof of the difficulty of prevent- ing the German urge to recovery and independence from over- stepping the mark and becoming aggressive and...

The Importance of Bombers

When the Service Estimates were published, earlier in the year, gloom was thick. Their story of reduced expenditure was accom- panied by tales of waste and frustration in the...

Few measures have been assailed by a heavier battery of bad arguments than the Licensing Bill which got its second reading in the House of Commons on Tuesday. It was attacked...

More trouble seems to be brewing in Indonesia. Over the week-end the Dutch Government at The Hague issued a communiqué defining, primarily for the benefit of the Committee of...

The fact that buying and selling of food is in normal times treated as a branch of business was often forgotten during Tuesday's debate, and not least when the Minister of Food...

King Abdullah has become the Tito of the Arab League. He is accused of most of the crimes—disloyalty, self-aggrandisement, con- nivance with the West—which led to the expulsion...

When the snow lies round about, deep and crisp and even, it may be of some comfort to the householder to know that it has been proved scientifically that the warmest houses are...

A strike, preferably in one of the transport services, threatens to become a permanent feature of the English Christmas. The annual attempt to move persons and parcels about for...

THE FAILURE OF U.N.O.

T O write off the United Nations as a failure would be unwarrant- able. To pretend that the most recent manifestation of United Nations activity, the General Assembly, was...

It is some time since I have read a more

moving story than the report (in Wednesday's Times) of the murder by terrorists in Malaya of Mr. A. M. Blake, superintendent of a home for orphans not far from Kuala Lumpur. He...

written by a Mr. Malcolm Thomson under the auspices df th Dowager Countess Lloyd George, L.G.'s former secretary, whoin he married in 1943 at the age of So, is lavishly...

Every week the Tribunal at Church House gives newspaper reader

i what they want (let me admit at once that I read every word of the fullest report I can get). This week there has, of course, been Mr. Belcher, who, however his evidence may...

To generations of Etonians the news of Sir Henry Marten's

death will have caused a sense of loss much more direct and personal than is usually the case when a master dies. Like all great teachers, he was an institution, but an...

O NE more intolerable imposition on the part of the Government Department has just been brought to light. The once-for-all levy—or so-called "special contribution "—on unearned...

The Government got the second reading of its Licensing Bill

on Tuesday night by a reduced majority, but it came very near to not getting it at all. Mr. Herbert Morrison was winding up. The debate had got decidedly lively, as debates...

THE ARMY WE NEED

By BRIGADIER A. H. HEAD, M.P. I T has become increasingly apparent that little justification for National Service is to be found in its long-term effect on the shape and size...

THE NEW TIDE IN CHINA

By PETER TOWNSEND Shanghai, December 7th. P ANIC is seizing the cities of the Yangste valley as the Com- munist armies draw near Nanking, Chiang Kai-shek's capital, and some...

By GEORGE BRINSMEAD T MITE stiff breezes of the Rio de la Vata are favourable for kite- flying. The wind from the pampa sweeps the pasture-lands, the grain-fields and the wide,...

By A CAMBRIDGE TUTOR T HE Report on University Awards, prepared by a working party for the Ministry of Education and published last week, carries far-reaching implications for...

By CYRIL RAY • F ORTY years on from Granville Barker's and William Archer's first scheme, in 1903, for a national theatre there was still nothing to show for it but a...

By EDWARD MONTGOMERY New York, December 9th, 1948 A MERICA is in its pre-Christmas frenzy, and few people have time or inclination to think of anything more serious than the...

THE FLOWER On slim, green stem of silken thread Swings

the snowdrop in the field. Little ship with whitest sail, Tiny silent, sudden one. Out of Winter lom and loud Light thy meadow's Milky Way VIOLET CHURCHMAN.

By HAROLD NICOLSON O NE of the charming things aboutliving to a great age and know- ing a large number of important people must be that, within the space of one's own lifetime,...

THE THEATRE "One Wild Oat." By Vernon Sylvaine. (Garrick.) IT is not, I am afraid, to the higher side of our natures that Mr. Robertson Hare appeals. We love him dearly, but we...

"You Gotta Stay Happy." (Leicesteo Square.)—" Johnny Belinda." (Warner.) — " Luxury Liner." (Empire.) IT is perfectly easy to stay happy with Mr. James Stewart in what- ever...

Fidelio was performed for the first time by the present Covent Garden Opera Company on December 9th, and proved one of their most successful ventures. The French comic opera in...

AT last there is a David exhibition in London, and one which is impressive despite serious handicaps. Not the least of these is, of course, the fact that the fancy colours of...

Si,—The Atlantic Pact seems likely to be based on the Rio and Brussels treaties; the purpose of this letter Is to suggest that it should draw also on another source—the...

CHRISTIAN HUMANISM Sin,—In my judgement, for what it is worth, the second half of the review of the Bishop of Southwell's latest book by Dr. C. E. Raven in The Spec- tator of...

SIR, —As one who is affected very greatly by the present unsatisfactory state of affairs in the public dental service I have read with interest your fair and reasoned paragraph...

Sta,—Much has been written and much discussion aroused during the past few weeks concerning the great problem of conscription. Somewhat naturally, I suppose, most of this has...

SIR,—The Headmaster of the Leys accuses me of ignoring facts. Surely, what I am doing is to face up to them. I know what the attitude of some of the universities is. Personally,...

BOS WELL ON THE NORTHERN CIRCUIT

Sta,—In my letter to you on the above subject I confess that by a slip of the pen I wrote quaere by mistake for quare. Poor, however, as are both my latinity and my penmanship,...

PAINTING AS A PASTIME

SIR,—When Janus quotes Mr. Winston Churchill as "the high authority" for saying, "All the greatest landscapes have been painted indoors," I feel an itch to challenge the...

SIR,—Prof. Bonamy Dohree, in his review of Dame Una Pope-Hennessy's Canon Charles Kingsley, states that Kingsley (as Parson Lot) struck out "a phrase another was to popularise,...

SIR,—Janus's animadversions on level crossings err on the side of leniency. In this age of mechanical transport they are the invention of the devil. I live in a semi-urban -...

An unheard of number of canaries were exhibited recently at a cagei bird show in London, and their singing was described as so loud that( you could not hear yourself speak. Now...

WHY NOT A SUBSCRIPTION TO "THE SPECTATOR"? Subscription rates for GL Britain and Over- seas by ordinary mail ... •... ••• Air Mail to Members of the Forces in any part of the...

" The small hamlet forms the link between the farmer and his stock- men and the rest of the population." This wise sentence comes from a letter by Colonel Lort-Phillips (of...

SIR, —The "deplorable construction" of which Mr. Weekley complains did not, apparently, offend the authors of the Authorised Version. If Mr. Weekley turns to St. Mark viii 27,...

Silt,—Reviewing John Betjeman's Poems in your issue of December 10th, Mr. H. A. L. Craig states that Praed was a parson. But though the author of The Vicar had two intimate...

Sm,—The Declaration of Human Rights adopted by the United Nations Social Committee included among other matters the freedom to join trade unions. What a pity it did not include...

One of the first questions to ask when desiring a new shrub is whethe al it is quite hardy. As a brother of the famous shrub specialist, Mr. Vi caryl Gibbs, used to say, "I will...

Six,—In commenting s on my article The Odds for 195o, Miss Lakeman suggests that the victory of Dr. Malan in South Africa shows that "our elections are a gamble, and a dangerous...

Six,—Mr. Morrison, lamenting the eclipse of the topee, may be relieved to hear of a perhaps unexpected part of the Empire (sorry, Common- wealth; in connection with topees, the...

A new idea is being put forward by the most

active British group of the International Committee for Bird Preservation, whose address is the British Museum, Cromwell Road, S.W.7. The present emphasis is ott duck, which are...

Is the coup de foudre a Romantic invention ? How often does one human being, at first sight of another, perceive a fatal affinity? Less often perhaps than the Romantics...

I , Lessons from History ? Civilisation on Trial. By Arnold J. Toynbee. (Oxford University Press. PiOnssoit TOYNBEE'S volume of essays (thirteen in all) is mostly. based upon...

THE Trollope revival of the nineteen-forties can partly be attributed to the war, for Trollope's plump upholstered world, with its super- ficial values and contented, sensible...

Spanish Journey. By Halliday Sutherland. (Hollis and Carter. 15s.) IT probably would not please Dr. Sutherland to be told that he is just the kind of tourist approved of by...

IT is perhaps hardly a compliment to Lord Swinton (whom some remember as Sir Philip Cunliffe-Lister and some as Sir Philip Lloyd- Graeme) to observe that he has written an...

The Reign of Henry VIII

Henry VIII and the Reformation. By H. Maynard Smith. (Mac- millan. 30s.) THE reign of Henry VIII has attracted so many historians during the past eighty years that there might...

The Labour Party from Within

Truce in the Balkans. By Elisabeth Barker. (Percival Marshall. 10s. 6d.) I AM not quite sure about the arrangement of this book nor of the aptness of its title, but I am quite...

[A• Book Token for one guinea will be awarded to the sender of the first correct solution of this week's crossword to be opened after noon on Tuesday week, December 28th....

SOLUTION TO CROSSWORD No. 506

By CUSTOS As the end of the year approaches, City views of the investment outlook are more than usually indeterminate. Nobody, of course, is wildly optimistic. Who could...