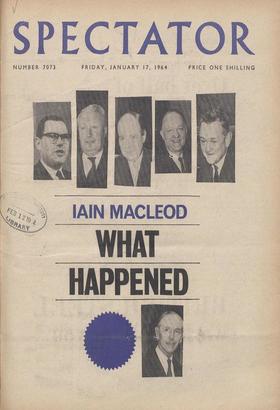 — Portrait of the Week— YET AGAIN, at the first whiff

of wintry weather, British Railways wilted. Trains were cancelled, timetables abandoned, and hints were given that services might be really disrupted should it actually snow....

A POLICE system organised for the nine- teenth century, and a prison system similarly irrelevant to the present age: no wonder crime goes on rising. In the debate in the...

By JAMES TUCKER OMPARABILI1Y is the word in the Port Talbot steel dispute. Both sides use it. But com- parability with whom? The Steel Company of Wales answers: AEU men in...

By IAIN MACLEOD U lsrrit. Mr. Randolph Churchill's book* appeared there had been an unspoken agreement that the less said about the recent struggle for the Tory leadership the...

Push from the Left

From CHANCHAL SARKAR NEW DELHI T HE news out of the annual session of the Congress Party at Bhuvaneshwar (Orissa's capital) this winter is not the resolution on Democracy and...

The Gladiators By DAVID WATT THE nearest I ever came to seeing murder actually done was one New Year's Eve in a troopship mess when a quite remarkably unpleasant cavalry subal-...

By RANDOLPH S. CHURCHILL ' THOUGHT the Sunday Telegraph's Colour Supplement on the Pope's pilgrimage to the Holy Land was a very fine piece of work. It is a pity though that...

By KATHLEEN J. SMITH* D OBBERIES are now being reckoned in frac- tions and multiples of a million pounds. Jewellery, bullion, banknotes. What used to be considered at best a...

Those who, like Gibbon and Namier, have marked the connection between corruption and liberty—no one, said Namier, will bribe when he can bully—will deplore the winding up of the...

Talking at Ditchley In wartime the lovely house of Ditchley

Park near Oxford was on occasion a headquarters of Winston Churchill's, and here a number of im- portant talks with American leaders were held. It is now the Anglo-American...

`And Naked to the Hangman's Noose'

The cover of New Outlook, the Liberal news- paper, features a charming parody of Con- servative advertisements. Under a picture of a teddy bear with a severed head there is the...

IN an article in the Sun- day Times Robert Harling advocated the turning of Leicester Square into a pedestrian precinct. This would be a pleasant rever- sion to the Edwardian...

reviews The Fight for the Tory Leadership, by Randolph S. Churchill.' January 12, 1964: 'How much longer is Mr. lain Macleod going to keep up his baffling silencer- Sydney...

The Waters of Jordan

From DESMOND STEWART CAIRO N the last ten minutes of his December 23 I speech at Port Said, President Nasser (to use Fitzgerald's metaphors) flung a stone and un- leashed a...

Reform Bill for the C of E

By CHRISTOPHER MARTIN HE long period of self-criticism by the Church I of England reaches something of a climax with the publication of the report by Leslie Paul on The Payment...

Sia,—Professor Howard is so disarmingly polite about my strictures against the ISS that I am almost at a loss to ward off his delicate barbs. I certainly agree with him that...

S/R,—II was good of the i Boultings to go back

to 1944 in order to get your readers to try to under- stand the general problems of British film production and the special problem of British Lion. The Boultings have been...

POLLS AND THE ELECTION

SIR,—David Butler in his article last week on Gallup Poll and NOP introduces two tests of their com- petence which strike me, a practising pollster, as being irrelevant and...

The Years of the Lion James H. Lawrie, A. C. Batchelor Polls and the Election Henry ' D urant Defences and Deterrents Richard Gott, Philip Windsor The Situation in Singapore...

A CANTERBURY TALE SIR,—David Watt's lighthearted article slides over the

most important issue of the political film unit's visit to Canterbury. Parliament has decided that party political broadcasts are part of our democracy. If the three parties are...

SIR,-1 wonder, did the Spectator, in his choice of the pseudonym under which he writes his Notebook, expect (no doubt) whimsically to refer us to this passage? Then there is my...

SIR,—I agree with your correspondent, Dennis Thompson, that for all

but a few cases a court of officers is an extremely fair tribunal. It is these few cases, such as the Cory and Swabey cases, compli- cated by conflicting evidence, which should...

THE SITUATION IN SINGAPORE

SIR,—S. Rajaratnam is guilty of misleading your readers in his letter (Spectator, January 10) and must, therefore, be corrected. Before 1 comment on the important points he has...

SIR,—To my letter of January 3, I should add that Percy Pilcher made his flights in 1895 'after various consultations with Otto Lilienthal.' It was from Saturday, August 6,...

SIR,-1 have just seen Mr. Richard Gott's review in your

columns of the report Arms and Stability in Europe, which, with Mr. Alastair Buchan, I had the honour to write for an Anglo-Franco-German study group. As the rapporteur of the...

SIR,—Major James Caldwell's comments on my article 'Did the Wright

Brothers Fly First?' (Spectator, December 20) recalled a remarkable meet- ing I had with the late James Watson who produced documentary and photographic evidence to support his...

TAKE a girl like Cleo- patra, throw in Apollo, a few dozen nymphs with- out their attendant shep- herds, stir rapidly with an equal number of fauns, add a nameless gladiator and...

By HANS KELLER Comparisons between revisions and originals are always difficult, and never mind about masterpieces: so long as the different versions are a master's pieces, the...

LIVELY recent figurative paintings (together with photographic `pop' art which now looks passe) have irrupted into the RCA Galleries alongside the Albert Hall until January 29....

The Study of Man BY T. C. LETHBRIDGE A . the end of the Kaiser's War there was a great expansion of the interest taken in British archaeology. This interest was no new thing,...

A Case Against the Master

Henry James and his Cult. By Maxwell Geismar. (Chatto and Windus, 30s.) CASTING a cold eye over Jamesian criticism of recent years Mr. Geismar comes to a grim con- clusion: 'it...

When maybe a sparrow clicked his nail On the dry slate, and a barrowman called Something somewhere below maybe; So many rhythms in the air, But one especially that ran Over and...

DEAR MR. FRAYN, 1 have just been reading two different collec- tions of pieces which you originally wrote for your Guardian column, 'Miscellany.' Since you seem to hate all the...

Witness to the Russian Revolution. Edited by Roger Pethybridge. (Allen and Unwin, 42s.) 'HE lies like an eye-witness' (I/ryot kak oche- videtsI), they used to say in Russia in...

IN the old days, you knew where you were with wars. International politics were a pastime for gentlemen, indulged in by those who had enough money to make a show at court....

THE above subtitle is really too portentous for this comparatively haphazard book. It is true that Frank O'Connor expounds at intervals a thesis, and offers many...

A Kingdom for My Horse. By B. L. Jacot. (Michael Joseph, 16s.) A BOY, a rogue uncle, an appealing dog, and an old horse bound for the knackers: these characters put one in fear...

By NICHOLAS . DAVENPORT Irony apart, there are important issues in- volved—government aid to the film-producing industry, the sale of a government-owned and controlled company...

By CUSTOS T HIS is a time for investment caution, but not for hasty and indiscriminate selling. Why, for example, get rid of LEYLAND, which has just reported a pre-tax profit...

One Foot in the Door By LESLIE ADRIAN RUMOUR has it that door- to-door selling, with all its Z-car type Newtown low- life drama, will be dis- cussed by the Consumer Council...

By LOTHBURY LL the 'big banks' have published their 1963 ilLfigures. Martins was the first to open the batting with an unexpected, but welcome, New Year's present to...

By MARY HOLLAND ONE of the legends I was brought up to regard as Holy Writ has to do with the flashing wit and all- engulfing conviviality of Dublin pubs. Like most people in...

By ALAN BRIEN THE scientific evidence for the equality of man is no longer as clear-cut and incontrovertible as old- fashioned progressives used to think even twenty years ago....