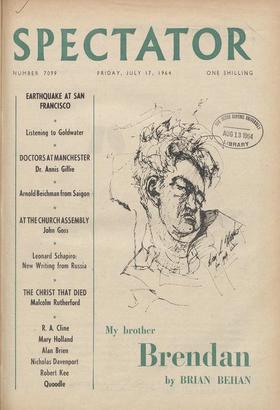 EARTHQUAKE AT SAN FRANCISCO Listening to Goldwater DOCTORS AT MANCHESTER

Some impractical theorists want to drive all moderates and liberals out of the Republi- can Party and then have the remainder join forces with the conservative groups of the...

—Portrait of the Week— IT WAS, AS THEY SAY, a

not uneventful week at home and abroad. The Union of Post Office Workers, claiming an immediate pay increase of 10s. against the 9s. 5d. offered them by Mr. Bevins, announced a...

JOHN BOURNE writes: The biggest question mark over this week's fantastic chaos of mail bags is why the Post- master-General, knowing that his postmen were all set to strike in...

R. A. CLINE writes : Those heavy train robbery sentences have divided public opinion almost as much as Suez. The penal reformers are lamenting what they regard to be a bad case...

O F all the Festivals of the Arts which have sprung up in recent years, that in the City of London is perhaps the most welcome. It is astonishing that on only its second...

At the Church Assembly Bishops and Donkeys

By JOHN GOSS M ORE arid more the Paul Report looks like a conjuror's hat from which is produced, In speedy succession, a variety of objects fOr • the inspection of a bewildered...

The Inward Gaze By DAVID WATT T im most noteworthy thing about the great Mods v. Goths debate on the accommodation of the House of Commons was the fact that only about 15 per...

From ARNOLD BE1CHMAN SAIGON I 1 7 you built a ten-foot-high wall around this country and you patrolled it every hundred yards with soldiers and police dogs, the war with the...

Why Not Victory? By RICHARD GILBE:RT The only alternative to victory is defeat.' —Barry Goldwater. I T was the middle of my regulation year in America. I was doing time in...

Some readers will inevitai■ly receive this Issue of the 'Spectator'

later than usual. We much regret this delay, which is caused by the dispute in the postal service.

By BRIAN BEHAN Ah death where is thy sting a Iing a ling. — The Hostage, by Brendan Behan. W HAT do I think of Brendan Behan?' The lorry driver looked worried for a minute....

Operation Valkyrie It happened on July 20, 1944—but just what

• are we saluting, I wonder, when we remember the twentieth anniversary of Stauffenberg's at- tempt to kill Adolf Hitler next Monday? The events of that day, when all the...

Where Did We Meet?

I find 'I'm sure you don't remember the last time we met' an infuriating observation. One scrabbles back through the corridors of school, Cambridge, the war, political meetings...

Malawi I am not very experienced in cabling date- line

•stories from faraway places, but the press arrangements for covering the Independence celebrations in Malawi were so admirable that the chore was a simple one. 'Indeed, all the...

IF a leading article in The Times thunders at the Tories, ordering them to drop a political bone, it is fairly certain that the Tories are, in fact, on a sound point. And so, in...

The Shadow Over the BMA By ANNIS GILLIE* F OR the doctors gathered in Manchester this week for the British Medical Association annual meeting, three and a half days will be...

, Foreigners Are Mostly Fools BY CHRISTOPHER HOLLIS According to

the best-known rules, Since foreigners are mostly fools, It's only common sense that, when There's so much wrong in SE10, We don't much bother what may be The sufferings of...

Sus,—No doubt witch doctors are held in even higher esteem in their own societies than are medical men in,ours. Perhaps your correspondent, J. B. Ashe, would be sufficiently...

SIR,—Permit a former member of the Church Assembly to protest against the article by Mr. David Watt on the above matter. The facts arc clear. The Measure if passed will...

SIR, --The marked reluctance—to put it less strongly than one might—of all but a dwindling minority of older voters to share in the burden of keeping party- political...

Si,--Black rule in South Africa? Is that what those who

are opposed to apartheid want? Naturally most white South Africans, though they may object to much of the oppression practised by the Government of South Africa, are not...

SIR,--I do not trust Mr. Charles Reid's memory. of What I Said about Stravinsky (or anyway What I Meant). Anyone who looks at my operas must admit that I would never have...

SIR,—In his brief comments on my book, Harold Wilson: The Authentic Portrait, David Watt in- cludes an extract—out of context, of course, and with the clear aim of deriding the...

SIR,—It was my honour to serve in Sarawak several years

ago under the auspices of Voluntary Service Overseas. However I, and many other ex-volunteers, have grown alarmed and somewhat perturbed at present developments in VSO. Perhaps...

SIR. It is possible to make a moral defence of onartheid, as Mrs. Atherley does in your issue of July 3. The questions posed are surely as much practical as moral. There arc...

Sm,—Is it not a scandal that the Tories (or Aims of Industry) have not raised the issue of Stonehenge in their election campaign? Here is an example of public ownership at its...

Sta,—The only surprising thing about Watchman's strictures on aircraft noises is that he should con- fine them to the supersonic. Obviously he must live well away from London...

SIR,—At . the request of his family I am editing the letters of Mark Gertler, the artist, who died in 1939. If any of your readers have letters from him or material bearing on...

SIR,—The PEN anthology of contemporary poetry which has appeared annually since its inception in 1952 (except during the printers' strike of 1959) is now to be published by...

BULL-FIGHTS SIR,—Now that many thousands of British holiday- makers will

be going abroad, could we appeal to them through your paper, if they go to Spain, to enjoy that beautiful country without going to bull- fights? The Spanish corrida involves...

The Christ That Died

doxical that this century's most disruptive force, scattering traditions to the winds, should be an artist as provincial almost as the village Imicer. Picasso's kaleidoscopic...

QUIGLY By ISABEL PENELOPE MORTIMER'S glum novels have always seemed to me highly film- able, for their external vividness and eye for de- tail make pictures in your head as...

However, within its month's span the Festival offers a wide range of dance performances from both home and abroad. For the English ballet- 8 0 e (who is hardly likely to visit...

As the annual good works of the Handel Opera Society approach, my heart sinks and usually In the Society's Richard I, their revival (under- stood to be the first production...

The Cleansing Process By LEONARD SCHAPIRO TT is, I suppose, inevitable that our main 'interest in Soviet literature should usually tend to be political—the Soviet party...

A Breathing Space. By Thomas Blackburn. (Putnam, 12s. 6d.) THOMAS BLACKBURN'S earlier work was SO over- laid with Yeats's manner and imagery that it was often difficult to see...

Big Business in the Third Reich. By Arthur Schweitzer. (Eyre and Spottiswoode, 55s.), IN so far as the writing of modern German history is concerned, 1964 seems to be one of The...

Battles of the Boer War. By W. Baring Pember- ton. (Batsford, 25S.) DR. BALMER'S undemanding book is the literary equivalent of the historical compilation film. It contains much...

Sometimes, caught without dedication, You will be disturbed by the Rancour of curious disbelief which will Engage your weaknesses In pointed derision And disdain as odd The...

Changing the Mandate of Heaven

PROFESSOR LATTIMORE has come from the United States to take charge of the newly estab- lished Centre of Chinese Studies in the Univer- sity of Leeds—an agreeable example of the...

The Garrick Year. By Margaret Drabble. (Weidenfeld and Nicolson, 18s.) The Innocent Dreamers. By Alice Tisdale Hobart. (Cassell, 21s.) THE novels under review this week fall...