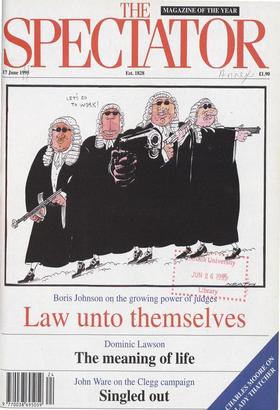 Game of chance. M r John Major, the Prime Minister, came under withering fire from Lady Thatcher, a former prime minister, in a series of interviews to promote the second...

PETER PRESTON W hat have you done to this Johnson fellow?' asked my dad among the vitupera- tive volcanoes of last winter. Dunno,' I said, absolutely genuinely. But now the...

What Margaret could mean for Major CHARLES MOORE hen BBC controllers appear on the air to defend an unpopular programme against criticism they love to say, 'Well, we've been...

THE LONG ARM OF THE LAW

Boris Johnson argues that judges are acting like frustrated politicians, which is what some of them very well may be THERE IS NO mistaking the anger in the minister's voice as...

FROM BAD TO WORSE TO BOSNIA

Jonathan Eyal says western efforts to end the war in Bosnia are doomed to fail, even if we withdraw our troops AN AGREEMENT in the Balkans, Prime Minister Disraeli instructed...

FROM OUR AUM AFFAIRS CORRESPONDENT

Joanna Pitman marvels at the unceasing Japanese fascination with mystic cults and microwaves Tokyo FOR MOST of last week, the Japanese public sat in hunched and delighted rap-...

Will - of the week Mr William Sully WHITE, of 4

ALL YOU NEED IS LIFE

A fortnight ago, Dominic Lawson became the father of a baby with Down's syndrome. He experienced a mixture of elation and sadness AFTER ONLY two and a half hours' labour...

THE COURT OF LAST RESORT

Child abductors are professionals, writes Alasdair Palmer, and the number of their clients is growing WHEN Stuart Rein lost his battle for cus- tody of his daughter, he was...

THE POLITICS OF PAROLE

The question is not whether Private Clegg is a murderer, writes John Ware, but why his case is under review and not others IF MARTIN McGUINESS says the release of the...

SEND IN THE RUBBISH BINS

THE TRAMP question was discussed at the Local Government Board on Tues- day, when Mr. Shaw-Lefevre received a deputation representing over two hun- dred Boards of Guardians. Mr....

NO SUCH THING AS A FREE PEACE

Jenny McCartney, this year's T.E. Utley Memorial Award winner, investigates the modern uses of Unionism THERE IS an axiom which British politi- cians love to cite when venting...

persist.. . NO SOONER had I arrived in the hos- pital one day last week than I was asked to go to the casualty department. A young man had been brought in not long before who...

I'VE BEEN reading the Bible, and, though there are some rude words in it, I do not intend to mention them. I was brought up on the Rhemes- Douay as revised by Challoner, so the...

What happens when much-talking judges get swept along by the tides of history PAUL JOHNSON L ord Justice Simon Brown's 40-page judgment in the homosexuals-in-the-forces case...

The Prime Minister of Canada invites me for an intimate weekend in Halifax CHRISTOPHER FILDES D ear Mr Chretien: Thank you for your kind invitation to join you for the weekend...

Sir: Boris Johnson misunderstands the effect of a public interest immunity certifi- cate (Politics, 4 June). It is not a gagging order that frustrates justice. The person, by...

Sir: Alasdair Palmer's article on homosexu- ality and the Armed

Forces was a tremen- dous breath of fresh air on a topic that appears to have vigorously stirred up the palaeolithic prejudices of those who imag- ine themselves to be the...

LETTERS Arms and the men

Sir: In his article (Prejudices on parade', 10 June), Alasdair Palmer's vision seems to become clouded with moral outrage, and as a result he jumps to conclusions on a num- ber...

Sir: The article by Alasdair Palmer horri- fied myself and

a number of others. The content was a typical product of journalists whose level of moral standards these days is either non-existent or sadly low. Neither was it the sort of...

Sir: Anne Applebaum's article (To we need people like Michael Howard?', 27 May) raises more issues than can be properly discussed in a letter, but the effect of illegal...

Sir: In his article about Germaine Greer and the Guardian (`The feminist world war has begun', 10 June), Paul Johnson refers throughout to Ms Greer and says that Alan Rusbridger...

Sir: I have followed with interest the corre- spondence,in The Spectator about imprison- ment for non-payment of the television licence (Letters, 10 June). I have no televi-...

Sir: Thank God someone is attacking the RSPB (`Yum, yum, pigeons again', 27 May). I wish they were an endangered species. I have been protesting about spar- rowhawks for over a...

Delighted , in Burma Sir: Congratulations on the introduction of a

bridge column. I have advised other edi- tors to include one in their papers, but never succeeded. I usually read The Spectator — but will now do sci, more regularly — in a...

Sir: I am very much startled and grieved to read in The Spectator that dear Giles Auty is leaving us to go so far away. His coura- geous gales of good sense have delighted me...

Many of us may be 'out of touch' and would prefer to stay that way SIMON JENKINS I watched just three editions of the noto- rious television show, The Word. It was dreadful,...

A star is borne Ian Waller THE PATH TO POWER by Margaret Thatcher HarperCollins, £25, pp. 656 H aving ploughed through Lady Thatcher's first volume of memoirs I approached her...

A man is known

by the company that keeps him Laurence Baron COMPANY MAN by Anthony Sampson HarperCollins, f.20, pp. 319 A nthony Sampson's elegant and provocative study of the social history...

Beryl Bainbridge THE GREAT TASK OF HAPPINESS: THE LIFE OF KATHLEEN SCOTT by Louisa Young Macmillan, £20, pp. 299 S ome years ago, when researching a novel to do with Captain...

Far from the madding war

Teresa Waugh INCIDENTS IN THE RUE LAUGIER by Anita Brookner Cape, £14.99, pp. 219 T he trouble with Anita Brookner's new novel is that you cannot get it out of your mind. Once...

Hamlet on the ghost

Roger Lewis SHADOW OF THE STONE HEART: A SEARCH FOR MANHOOD by Richard Olivier Pan, £9.99, pp. 197 T he Two Ronnies once did a gender- reversal sketch in which the chaps were...

Anne Chisholm OBLIVION by Josephine Hart Chatto, f12.99, pp. 201 R eading this book is like finding your- self sitting next to a fashionably thin and very well-dressed person...

Laying down their lives

All the perversions imaginable

Charlotte Raven BEHIND CLOSED DOORS by Alina Reyes Weidenfeld, £12.99, pp. 334 W en my best friend lent me her copy of Nancy Friday's My Secret Garden, she warned me it was...

Exhibitions The Venice Biennale (till 15 October) Not even one Canaletto Martin Gayford T he `Biennale' according to a veteran critic of my acquaintance, 'is such a sad...

Russian gold Richard Osborne I thank you, Josif Vissarionovich, for your aid. I will pray for you day and night and ask the Lord to forgive you your great sins before the...

Chaos in the cosmos Alan Powers A new book by Charles Jencks is an event in the architectural world, but not one that is universally welcomed. At Cam- bridge in the 1970s, the...

The lady's not for turning off Ian Hislop D avid Frost began his interview with Mrs Thatcher with what he must have thought was a joke. Did she ever feet like Norma Desmond in...

On being mugged Taki L ast Thursday evening, having attend- ed a couple of book parties, I went to San Lorenzo where I dined as guest of the owner along with Charles Glass. I...

A unique experience Carole Morin S oon after arriving at UEA for the spring semester as Writing Fellow, a muti- lated photograph of me wearing shorts in Barcelona was pinned...

A giant's heart Jeffrey Bernard bl ether running the Derby on a Sat- urday for the first time in an age was a suc- cess is neither here nor there to me. They can run it on a...

Confused wilderness Nigel Nicolson T e Secretary of State for Scotland now faces an awkward decision, whether to allow a huge hole to be dug out of South- ern Harris in the...

SOMETIMES a restaurant can be so bad it's worth studying

why. And it's quite unneces- sary for The Newport to have got it all so wrong, because the most important thing they have got right: the chef, Ian Loynes, whose food I first ate...

Hot play Andrew Robson GOULASH BRIDGE (where cards are generally dealt to each player in piles of five, five, then three) makes for exciting auctions, but the play is rarely...

ISLE OF i u RA

11,01 VAll VORM %NISM1 ISLE OF i U RA SRGIF VII SCOICII%Nifil COMPETITION Dirty dozen Jaspistos IN COMPETITION NO. 1885 you were invited to incorporate a given dozen words...

Dutch uncles Raymond Keene IT IS SAID THAT we Brits have a genius for self-denigration, constantly belittling our own achievements in comparison with those of foreigners. I...

A first prize of £25 and a bottle of Graham's Late Bottled Vintage 1988 Port for the first correct solution opened on 3 July, with two runners-up prizes of £15 (or, for UK...

The game's immortal kicker Frank Keating Cape Town BY THE TIME many of you get round to this back-page corner, the two countries to contest next Saturday's World Cup final...

. • Dear Mary. May I suggest the following method of dealing with unwanted calls from double- glazing sales people? On answering the phone and being asked to confirm that you...