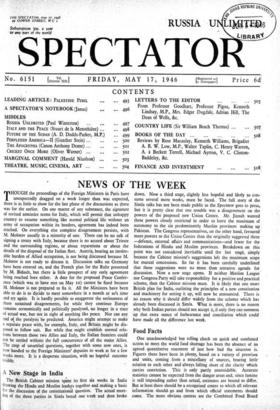 One unacknowledged but telling check on quick and combined action to meet the world food shortage has been the absence of an agreed quantitative statement of just how bad the...

A New Stage in India The British Cabinet mission spent

its first six weeks in India . drawing the Hindu and Muslim leaders together and making a basis for the discussion of the constitutional question. The actual meet- ing of the...

T HOUGH the proceedings of the Foreign Ministers in Paris have unexpectedly dragged on a week longer than was expected, there is as little to show for the last phase of the...

Nothing stops Mr. Shinwell from fighting, not even the consider- ation that, in his own words, it will not produce an ounce of coal. He flung the Coal Nationalisation Bill at...

When Sir John Anderson gave his opinion, in his Romans lecture at Oxford, that a system of Cabinet committees is preferable to the supervision of broad spheres of Government...

The report of the Spens Committee on the remuneration of general practitioners fully bears out predictions of the liberal treatment that would be recommended. The Committee was...

The question of the nationality of British women who marry aliens is at present being pressed on the attention of Parliament. The whole question is of comparatively recent date....

rr HE Government has not yet declared its attitude towards the .1 recommendations of the recent Anglo-American Committee of Enquiry on the problems of European Jewry and...

It is hard to feel any satisfaction at the news

that the Allies have ordered the destruction of all memorials in Germany of the 1914-1918 war. A kind of a case, no doubt, can be made out for the action— but are war memorials...

The protests of certain scientists—I have not observed any very

distinguished names among them—at the sentence passed on Dr. Alan Nunn May for disclosing secrets connected with atomic energy to the Soviet Government seem misconceived. The...

It is from a very notable mission that Lord Halifax

returns to this country this week, and the nation, irrespective of party, owes him deep gratitude for the way he has discharged it. Appointed Ambassador at Washington in '941,...

Sir Harold Scott, who is the head of Scotland Yard,

in condemning British prisons root and branch, speaks with full knowledge of his subject, for he was for seven years Chairman of the Prison Com- missioners. And there is no...

The return to London of the famous Austrian pianist, Artur

Sclmabel, to give a series of recitals at the Albert Hall brings into prominence once more London's grave lack of a moderate-sized concert hall since the destruction of the...

On information supplied me I stated last week that the

new Spanish Institute in Eaton Square would be the first of its kind in London. I am informed that there is in fact already an institute of the same kind, or more or less the...

M R. ATTLEE'S minor ministerial changes are not very impres- sive and not a little perplexing. The promotion - of Mr. Hugh Gaitskell to the Parliamentary Secretaryship of the...

ITALY AND THE PEACE

By STUART DE LA MANOTIERE I T is a truism to say that no peace treaty is popular with the vanquished, but one of the few decisions on the treaty with Italy tentatively arrived...

FUTURE OF THE SUDAN

By A. D. DODDS-PARKER, M.P. T HE question of the withdrawal of British ,, troops from Egypt having now been settled for better or worse, the further pro- blem which the...

By GUNTHER STEIN • M ANY Americans these days feel that their economic system is on trial. Will the American economic system be able to raise industrial and agricultural...

By ANTHONY C. DEANE I is a strange fact that, if anyone asks his bookseller for a 1 Bible, almost certainly he will be given an incomplete copy— one containing sixty-six "...

By OLIVER WARNER T HE unlikely has happened once again. The hedonists who refused to believe, in 1939, that they had seen the last of county cricket are proved right. The fun of...

By HAROLD NICOLSON I N reading the many obituary tributes which have been paid to the late Belgian Ambassador, I have been struck by the fre- utiency with which he has been...

Le Jour Se Leve." Revived at Studio One. ALL this week at all hcurs of the day the queues have stood patiently in Oxford Street waiting for a last sight of Le lour Se Leve, a...

WHILE the London scene is dominated, at either extreme, by the exhibitions at the Tate and the Royal Academy, a number of other galleries will, repay a visit. Messrs. Tooth are...

SIR,—The daily newspapers have for some time been clamouring for more newsprint in order to carry out on a larger scale their task f ar informing and educating the British...

SIR,—When touring Canada a few months ago, the Lord President of the Cou nc il, Mr. Herbert Morrison, said that before the State takes over an industry or service "it is up to...

JUSTICE AT NUREMBERG Stn,—Mr. Harold Nicolson's description of the Nuremberg trials in his Marginal Comment of May loth is so admirable that I hesitate to add anything to what...

Stg,—It is most refreshing to find your art critic using the same ex- travagant terms of opprobrium with regard to the general level of paint- ings at the R.A. this...

SIR, -Will you allow me space for a few words on the Liberal Party and what I think to be its chief need—reunion? There are plenty of the rank and file who think the same....

SIR, —In the course of your article on this subject, you say that during the war "Egypt put her whole resources at the disposal of the Allies, and British and Dominion forces...

SIR, —May I add something to the letter you published last

week from the late Senior Chaplain to the R.A.F. in the Levant about Ben Shemen School in Palestine? I recently spent some hours in that same " children's village," and, like...

Sta,—The esteemed junior M.P. for Cambridge University was reported as having " reminded the House of Commons of the opposition of the medical profession to the health insurance...

SIR,-I have read the letter of the Rev. H. A. Smith-Masters, lately Senior R.A.F. Chaplain in the Levant, with much interest. Like him, I also visited Ben Shemen School, near...

IT is recorded in a recent number of The Scotsman that a rook's nest was brought down by workmen pruning trees in the churchyard at Gifford in East Lothian, and that an...

does. But whereas as a prisoner of war he was able, and indeed felt obliged, to remain " motionless for long periods," that is precisely what no wage-earner and no housewife in...

THE SPIRIT OF SERVICE

Sta,—We read with much interest in The Spectator of May 3rd Frank 0. Salisbury's letter on the spirit of service. We should like to draw the attention of your readers in London...

SIR,—Every day now as one reads one's morning correspondence one is filled with an increasing sense of impotent despair. Here are extracts from a, 4 letter just received from an...

SIR,—As no one else has done so, I venture to call attention to an odd slip made by Mr. Harold Nicolson in his " Marginal Comment " in your issue of May 3rd. He wrote: " No girl...

Pilgrimage to the West

An Arab Tells His Story. By Edward Atiyah. (John Murray. 12s. 6d.) THIS book has radiance. All that has ever been said of the qualities of the Lebanese, of their eloquence,...

Homer : The Odyssey. Translated by E. V. Rieu. (Penguin Books. ls.) AMONG the readers .of Homer in Fnglish those who know Greek are a small minority: =A somewhat larger minority...

Malay Fishermen. Their Peasant Economy. By R. Firth. (Kegan Paul. 25s.) THE author is the distinguished Professor of Anthropology at London University, and, with his wife,...

Towards a Socialist Agriculture. Edited by F. W. Bateson (Gollancz. 6s.) FARMERS may be as crass and as obstinate as they are popularly reputed to be ; but the fact remains...

English Watercolour Painters : H. J. Paris. " Britain in Pictures " series. (Collins. 4s. 6d.) THE name of this admirable series indicates that it is the pictures that come...

8s. 6d.) The Lifeline. By Phyllis Bottome. (Faber and Faber. 9s. 6d.) TOE only convincing historical dialogue is that which is sufficiently alive of itself to convey the spirit...

IT is likely that this reprint, all royalties from which

are to be devoted to the Navy League's Sea Cadet Corps appeal, will attract a new generation of readers to one of the most remarkable bboks appearing in any list of standard...

SOLUTION TO CROSSWORD No. 373

THE SPECTATOR " CROSSWORD No. 375 IA Book Token for

one guinea will be awarded to the sender of the first correct sclution of this week's crossword to be opened after noon on Tuesday week, May 28th. Envelopes must be received not...

By CUSTOS So great is the City's faith in the Treasury's power to implement the policy of cheap money that Mr. Dalton's latest manoeuvre has fallen rather flat in the City....