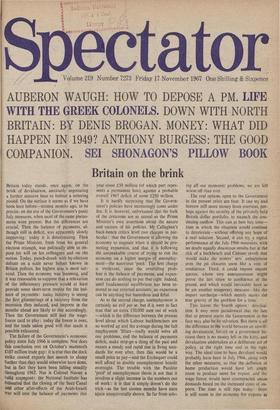 Britain on the brink

Britain today stands, once again, on the brink of devaluation, anxiously negotiating a further massive loan to bolster a tottering pound. On the surface it seems as if we have...

The message which Mr George Thomson brought hack from Salisbury was n simple one. It was that Mr Smith and his more moderate colleagues are no longer prepared to offer the...

Sterling's back was to the wall; Sir Leslie O'Brien returned from Basle saying that he had 'every confidence in the pound"; the Bank of Eng- land rushed to its support; the...

CHRISTOP LI ER HOLLIS To a young lady of easy ways who is deeply interested in space travel. My dear, the moral code of earth. Has been to you of little worth. Now in the...

How to depose a Prime Minister

POLITICAL COMMENTARY AUBERON 'WAUGH It is a hazard of living close to the parlia- mentary scene that one begins to take its alarms, excursions and noises off with a greater...

GREECE MICHAEL LLEWELLYN-SMITH This is the first of two articles by the SPECLi- TOR's correspondent in Athens, the second of which will deal with the ideological life of Greece...

curious fact has come out to illustrate how what the physiologists call "reflex action" works on soldiers in their first battle. Official returns of the battle of Gettysburg,...

AMERICA JOHN GRAHAM Washington — These are vintage days for any- one who likes to watch a really bitter political fight. All this year President Johnson has been fighting a...

AVIATION DAVID WRAGG The Government appears to be on the point of telling BEA to order Trident 3s, which the airline does not want, in preference to the BAC 211, which it...

J. W. M. THOMPSON The chance juxtaposition of two speeches this week seemed to me to express precisely the elements of restlessness and frustration which mark the present...

Lists of things from the 'Pillow Book'

THE PRESS DONALD McLACHLAN If you opened a book and found its chapter headings to include such phrases as Right to Privacy, Treatment of Sex, Sensationalism and Distortion, The...

CONSUMING INTEREST LESLIE ADRIAN Now is the time for all good parents (and others with a taste for or duty towards children) to come to the aid of the toymakers. They expect...

Down with North Britain

TABLE TALK DENIS BROGAN I returned a few days ago from a visit to my native land during which Scotland was suddenly very newsworthy, especially to the inhabitants. There was,...

BOOKS ANTHONY BURGESS Who collaborated with W. S. Gilbert on The Happy Land? Which great novel-sequence is based on a metaphysical conception of the unreality and...

DEREK PATMORE Five Great Odes Paul Claudel translated from the French by Edward Lucie-Smith (Rapp and Carroll 25s) The poetry of Paul Claudel is something quite unique in...

MICHAEL PVENS Explorations: An Annual on Jewish Themes edited by Murray Mindlin and Chaim Bermant (Barrie and Rockliff 35s) How do you play it if you are dealt a Jewish card of...

PENELOPE HOUSTON Luis Bufiuel has said that Belle de Jour will be his last film. He is sixty-seven, very deaf, and there can hardly be more cinematic worlds to conquer. The...

THEATRE Soft Shaw shuffle HILARY SPURLING I have bitter memories of Heartbreak House— memories dating back to hours of pain and boredom long ago, with Shaw in the school-...

TELEVISION STUART HOOD A committee set up under the aegis of the British Film Institute—its members include 'men and women working in both BBC and ITV —has the interesting and...

ART PAUL GRINKE Almost hidden and certainly overshadowed by the splendours of the Turner exhibition at Agnew's is a roomful of rather dusty relics from the past. They are worth...

MONEY CHRISTOPHER FILDES 'Time is now so short—the Chancellor of the Exchequer speaking—`and the reserves have got so low that a change in the dollar rate of ex- change is the...

MONTAGU NORMAN NICHOLAS DAVENPORT When Macmillan was Chancellor of the Exchequer in 1956 he remarked to Robert Bootbby and myself—in an interview he gave' us on some memorandum...

The tax on exports

BUSINESS VIEWPOINT AMBROSE CONGREVE Mr Ambrose Congreve is chairman of Humphreys and Glasgow, one of the largest private companies in the country; contractors and engineers for...

PORTFOLIO JOHN BULL The latest sterling crisis has made me take another look at those companies which make over half their profits abroad. About the best in the list, British...

CUSTOS The appalling trade figures for October—dis- missed by the Prime Minister as 'meaningless,' but at least not fudged : I wonder what adjec- tive he would select for the...

• Word to the wise

ADVERTISING ROGER PENII3ERTON 'Meet Lord Aldington in the right frame of mind,' shouts the current Times advertisement in the series addressed to potential advertisers (they...

Sir: Mr Ludovic Kennedy states the prime aim of the Scottish Nationalist party very clearly in his article 'Yours for Scotland' (10 November). However, his apparent relish at...

A Tory says No Sir: Mr Woodhouse (10 November) is

to be con- gratulated on his courage in expressing his views on Vietnam. Of considerable interest is his treatment of the domino theory that if the whole of Vietnam went...

Sir: As no one seems to have made the suggestion, I offer NEVER MORE as an epitaph for Mr Raven (20 October). Robert Hartman Pedor's Close, Smithwood Common, Cranleigh, Surrey

Sir: The writer of your 'Fleet Street Intelligence' (10 November) must be either very young or very ignorant. Tom Fraser was never Secretary of State for Scotland; Tom Johnston...

Sir: If your corrrespondent Mr Daniels (Letters, 3 November) is really sincere in his regard for the preservation of human life at whatever cost, then he should sell his car and...

Sir: Mr Ludovic Kennedy writes that since he changed his

address he has regained a love for the country of his fathers. He also says he has left the Liberal party and will join the Scottish Nationalists once he is 'convinced of all...

An apology Our attention has been drawn to the article by Mr Donald McLachlan headed 'The Press—City Page War' published in last week's issue. The article stated that 'there is...

Sir: Ludovie Kennedy at the cross-roads pro- duces some curious

conclusions and in- consistencies. Despite Scotland's 'rich and an- cient heritage,' its 'own system of law, religion, education,' etc, he suggests that it should accept the...

Jay in the box

AFTERTHOUGHT JOHN WELLS On the dust-jacket of To England with Love by David Frost and Antony Jay, published this month at 25s by Hodder and Stoughton and Heinemann, there is a...

COMPETITION Competitors are invited to use the following ten words, taken from the opening pages of a well-known work of literature, in the order given, to construct part of a...

The first word game produced 116 entries, of which seventeen correctly identified the words as coming from the opening passage of Wuther- ing Heights by Emily Brontë. A guinea...