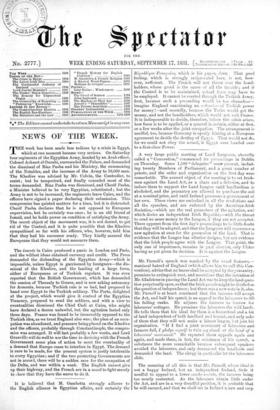 The imeute in Cairo produced a panic in London and

Paris, and the wildest ideas obtained currency and credit. The Press demanded the disbanding of the Egyptian Army—which is impossible, unless Egypt is garrisoned by...

The meaning of all this is that Mr. Parnell, whose

ideal is not a happy Ireland, but an independent Ireland, finds it needful to appeal to a lower couche sociale, the farmers being. too nearly contented. As the labourers obtain...

Mr. Parnell's speech was marked by the usual features,— maniacal

hatred of England (which allows him to call this Con- vention), advice that no leases shall be accepted by the peasantry,. promises to extinguish rent, and assertions that the...

NEWS OF THE WEEK • T HE week has been made

less tedious by a crisis in Egypt, which at one moment became very serious. On Saturday four regiments of the Egyptian Army, headed by an Arab officer, Colonel Achmet el 0...

a" Convention," commenced its proceedings in Dublin on Thursday. Some 1,500 " delegates " were present, includ- ing twenty Members of Parliament, and a great number of priests,...

It is believed that M. Gambetta strongly adheres to the

English alliance in Egyptian affairs, and certainly the 1Upublique Francais°, which is his paper, does. That good feeling, which is strongly reciprocated here, is not, how-...

The annual meeting of the Trades Union Congress, men- tioned

elsewhere, was marked this year by two highly significant incidents. One was the reception of the members by the Lord Mayor at an evening entertainment, a curious indication of...

The whole of Thessaly, the province ceded to Greece, has

now been occupied by Greek troops, without disorder or resist- ance. The Christian inhabitants are, of coarse, delighted, and welcome the troops with enthusiasm ; while the...

The projected meeting of the Emperors came off on Friday

week, on board the Imperial yacht Hohenzollern,' off Dantzic. The meeting was most affectionate, and contrary to expectation, the Czar landed and dined in Dantzic. It is...

General Garfield still lives. His removal to Longbranch has not

injured him, he sits up occasionally, and his pulse and temperature only rise high at intervals, and for short periods. The daily bulle- tins, however, now signed by the...

The Bonapartists in France attribute much 4:4 the decadence of

their party to the unpopularity of its existing head, Prince Jerome. Only eleven of his followers were returned at the elections, and only fifty-three Imperialist Deputies in...

The French Government has repented itself in the matter of

the Commercial Treaty. The Free-trade interests in France, discovering a little late in the day that the negotiations had broken down, pressed their representatives ; the...

The French carefully conceal their official news from Tanis, but

it is known to be very bad. Scarcely a day passes without 1,000, or on some days 2,000, French troops crossing the Mediterranean, till the force in Algeria and Tunis must be...

Switzerland has sustained a great calamity. The village of Elm,

in Canton Glarus, lies below the Tschingel Alp, and on Friday fissures were noticed by the villagers in the mountain, and a watch was set. On Sunday afternoon, at five o'clock,...

It is impossible ever to gauge the depth of human

stupidity. To judge from a correspondence in the Standard, there are men, educated and able to write good letters, who firmly believe that if we place a five-shilling duty on...

Mr. Grant Duff took lea-re of his constituents on Friday

week, in one of those speeches in which he reviews the situa- tion, after a fashion which we hope he will keep up in India. There would be a distinct intellectual interest in an...

The Methodists of the world have this week been holding

an " CEcumenical " Council in London. The proceedings, so far as recorded, were chiefly of denominational interest, their first note being attention to education, and their only...

The broad result of the London Fish Inquiry is that

37,258 tons of fish arrive in a year by water, and for that supply Billingsgate is an excellent market. The railways, however, bring 87,884 tons of fish annually, and could...

A scheme was proposed 'before the Council by an American

Methodist for starting a grand paper, better than any secular paper, and more attractive, but devoted to the interests of Methodism. The usual difficulty in the way of such...

The agitation for a Land Bill for Great Britain is

spreading rapidly. In Scotland, associations for this purpose have been formed in Aberdemshire and three other counties, and there is a distinct desire for it in the Highland...

T HE Irish fancy that Englishmen are hostile to the de- velopment of Irish manufactures is a mere traditional prejudice. There was such a feeling once, but Englishmen since then...

THE CRISIS IN EGYPT. E NGLAND and India together have paid twenty-three millions sterling for Lord Salisbury, and the account is open still. The clumsy, dangerous, and as we...

THE CONTINENTAL JEALOUSY OF ENGLAND.

T HE sleepless jealousy of England felt and, indeed, expressed by all Continental nations is not so entirely without excuse as our countrymen imagine. Besides the natural,...

LORD JUSTICE BRAMWELL. T HE announcement made this week that Lord

Justice Bramwell has tendered his resignation, is to be regretted on many grounds. The Court of Appeal, which was deprived a few months ago by death of its greatest Equity...

T HE Trades' Union Congress assumes more and more of a Parliamentary character with each fresh meeting. Indeed, it would now be doing it less than justice to compare its...

THE REMEDY FOR UNPUNCTUAL TRAINS.

T HE dead season has opened most auspiciously, with the appearance of a grievance which is at the same time widely felt, acutely irritating, and easily discussed. Parliament had...

THE CRIMINALITY OF REGRATING.

,O F all who read these columns, probably not half, though they are most of them educated persons, will be quite sure that they understand exactly the meaning of that word. •...

T N replying to one of the most stupid questions ever put in the House of Commons, Mr. Mundella was reported to have said that he had never seen the National Reformer. Whether...

THE CAMBRIDGESHIRE ELECTION. [TO THE EDITOR OF TICE SPECTATOR.'] Sin,—Will you allow a constant reader of your paper to ask you, with reference to the Cambridgeshire election,...

[TO THE EDITOR OF THE " SPECTATOR:1 STR,-It seems to me that in your issue of September 10th you lay too much stress upon the three English bye-elections that have lately taken...

[To TEE EDITOR OF THE "SPECTATOR."] SIR,—Commenting on Gambetta and French religion, you intimate that reverence for One above man is antecedent to the tie which binds man to...

[To THE EDITOR OF THE "SPECTATOR."] SIR,—It may, perhaps, be interesting to some of your readers to have recalled to their minds what Napoleon said of the letters and style of...

[TO THE EDITOR OF THE " SPECTATOR.") *Sfa,—Your article last week upon the above subject purports, as I understand it, to give "a clear view of the points at issue, and of the...

LING HOLME WINDERMERE. THE rivers feed thee from the valleys round, And rills from clustering mountains, Windermere; And in thy wind-stirred waters moves the sound Of life...

[TO THE EDITOR OF THE "SPECTATOR."] SIR,—In the review of Miss Brook's "French History for English Children," the writer remarks that the "story of France, as a whole, has...

[To THE EDITOR OF THE "SPECTATOR."] SIR,—You may like to add the following to Dr. Littledale's story of the musical cat. One day, during the severest part of last winter, a...

THE CREED OF SCIENCE.* THERE are men of undoubted intellectual ability when dealing with scholarship, history, and many other matters of human interest, who are yet incapable...

A " ROMANCE " in the form of two stately and excessively full octavos is an unusual apparition. But the anomalous form in which John Inglesant appears, not inaptly expresses the...

THE HINDOOS AS TlihY ARE.*

This book is one more literary disappointment. Its author, Baboo Shib Chunder Bose, an educated Bengalee gentleman —bred up by Dr. Duff, but not, we imagine, a convert—has the...

JOWETT'S THITCYDIDES.* Tuts is in some respects one of the

most unequal books that we have ever met with. It is an open secret that the-Regius Pro- fessor of Greek at Oxford is no Porson, and the first edition of his translation of...

THE PRIVATE SECRETARY.* Tnis is a book in which merits

and defects are so mixed as almost to baffle any reviewer who, being by nature conscientious, wishes in utterance to be just. Were we to judge from its strong passages alone, we...

Patnam's Sons, New York.)—Nervousness, thinks Dr. Beard, is the product of modern civilisation. America had the honour of invent. ing it, but no longer possesses the monopoly....

Records of the Fast. Vol. IX. (Bagster.)—Our readers, no doubt,

have already seen some of the translations of Assyrian texts which are collected in this volume, under the direction of the Society of Biblical Archteology. The name of the late...

Catalogue of the Manuscripts and Muniments of Dulwich College. By

George F. Warner, M.A. (Longmans.)—Edward Alleys], the founder of the " College of God's Gift," left a great mass of papers in the possession of the College. Among them were...

A Voyage in the 'Sunbeam.' By Lady Brassey. New edition. Longmans.)—Messrs. Longman have issued Lady Brassey's pleasant and picturesque, though rather thin, description of her...

In Spite of Fate. By Katherine Clivd. (Tinsley Brothers.)—The heroine

is an utterly reckless and unlifelike young woman, with "the dark, luscious eyes of a Provençal." She is the daughter of an English farmer ; studies Victor Hugo, Lamartine,...

The Little Masters. By W. B. Scott. (Sampson Low and

Co.) —We are taken into one of the by-paths of the history of art. The "Little Masters " were artist-engravers belonging to the city of Niirnberg. It was under the influence of...

Sanskrit, and its Kindred Literatures. By Laura E. Poor. (C.

Kegan Paul and Co.)—Miss Poor passes over a wide range of sub- jects. She starts from the earliest literature of Brahmanism, and comes down to "The Modern Poetry of Europe."...

We have received The Annual Register for 1880. (Rivingtons.)— A

volume that seems quite worthy of the well-conducted and valuable series to which it belongs. It contains, as usual, a First part, with, its two divisions of " English " and...

Science, Experience, and Revelation. By John Coatis. (F. Pitman.) —We

wonder how many more books will be written with a similar title, and with the professed object of reconciling modern science and its theories with the Christian Revelation. We...

MAGAZINES, Exc.—We have received the following for September —The Burlington,

containing the first chapters of a new story by the author of "Boycotted."—Catholic Progress.—The Dictionary of Needlework.—Vem Fels zum Meer (Triibner).