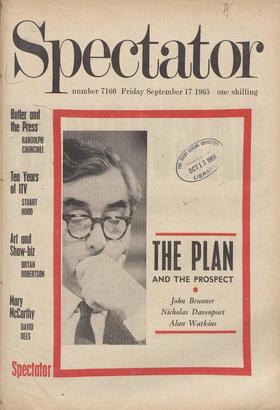 THE AUGUST 1RADF FIGURES showed a deficit of £52 million, an increase of £47 million over July, a deficit which was described by Mr. Douglas Jay as 'pretty good . . . the import...

You cannot exorcise arithmetic by shout- ing at it to go away.—Spectator leading article, May 14, 1965. Nearly all the judgments that have been passed (and encouraged by Mr....

Finding a Formula NIGEL FISHER, MP, writes: The constitutional conference to decide the future of Mauritius is now in its second week. This beautiful island in the Indian Ocean...

The Urgent Need OMMONWEALIII inactivity over the India- Pakistan war is no longer excusable. Now that the U Thant mission has failed to achieve some sort of cease-fire, the...

Time for a Lib-Lab Showdown DESMOND DONNELLY, Mr also Liberals at Scarborough ALAN WATKINS One year's subscription to the 'Spectator': £3. I 5s. (including postage) in the...

Lord Butler and Mr. Hogg RANDOLPH S. CHURCHILL writes: Mr. Quintin Hogg is a brilliant advocate: indeed I have retained him for a forthcoming libel . action; but he is not a...

By STUART HOOD ‘711-1E people of Britain,' said the Beveridge I Report, 'want broadcasting essentially as a public service.' This statement—in so far as it means anything at...

The Speaker's is not the only presidential chair tinder discussion, as it happens. When Perna- trl, ent adjourned for the summer recess it was fairly - certain that Mr. Emanuel...

The Portuguese Foreign Office is enjoying it- self, It has been a long time since it was asked a favour by the British. but not so long since the ,Portuguese asked a favour...

T HE' manonivrings around the empty chair of the Speaker have made quite a number 01 people look foolish regardless of the out- come. The activities of Mr. Peter Besse!l have...

Good men plant trees. bad men cut them down: . with this old observation I am in full agreement. But there are trees and trees. I was not pleased to see the encroachment of...

The response to the Spectator's 'study of opinion' at the Proms has been large and enthusiastic. Charles Reid is currently to be glimpsed with great piles of completed question-...

The buzz at Erith is that Labour will select its by-election candidate next Wednesday. (The locally connected and spendidly named Mr. Wellbeloyed is still the favourite.) If you...

But who is to oppose him? The extreme left, as always, wants to make a protest, a gesture; it wants to demonstrate, not to win. Hence the proposal to put up Mr. Will Griffiths,...

By ALAN WATKINS S HORTLY after Mr. James Callaghan's July measures were announced, a member of the Cabinet was due to appear on television. The Minister concerned was sitting...

The Return of Anastasia

From MURRAY KEMPTON NEW YORK T utE large fears and the small hopes of the United Nations had all flown away from New York last week on the frail mission of its...

M ICHAEL BOLUS, currently showing at the Waddington Gallery, is among

the recently established small number—it isn't a group—of young sculptors hell-bent on redefining not only the entire character of sculpture but also its particular function,...

Paris in those days than in London, and he got used to it and stayed on. We were approaching

If you think my rosy line of reasoning is un-

realistic or wonder how all this talent could be used in any practical way, let me recall a stroll through the West End several years ago with S. W. Hayter, a good English...

tunities we need for assessing the situation as a whole at any given moment. No complaints in either of these quarters, but the fact remains that until our livelier artists are...

Hamlet at Stratford Sta,—You began your criticism of Hamlet at Strat- ford-upon-Avon with 'It won't do.' Will you allow me to say what it did for me yesterday, and for a...

Give her the gift of confidence

Grown up. Ready to face the NN odd –give her a good start. A financial gift is always a help, but you can add so much by giving it in her own personal current account with...

' Bouleversed Selves about fresh and often quite experimental compositions. It's far easier to describe a new tonal set-up than write re-creatively about a well- known work of...

but exists as a coolly registered and articulated event in

its own right, piece by piece. Each sculpture is coloured, and even this retains its independence and absolute freedom from out- side interpretation--and confusion. The colour...

ting better and better. Such possibilities: imagine a skyscraper with

hectically coloured neon strips shooting around all over it—abstractly, doing weird and wonderful things. . . .' Well, Hayter's work isn't everyone's taste and some of you k...

Still, it has its points and its moments, its funny

lines (though not many) and its visual jokes that come off, if always rather too slickly (an Oxfam fund-raising occasion, for instance, contrasts the grotesque glitter with the...

Mr. Croft's production had also its share of the broader

virtues dependability, careful elo- cution and a nice sense of colour. So had Paul Hill's Troilus and Cressida, with a pretty, wittY Cressid (Charlotte Womersley) and a...

One of the. most impressive qualities of The Company She

Keeps is the range of the narra- tive—the stumbling, episodic journey of the New York bluestocking Margaret Sargent, towards some sort of precarious salvation. In all of Mary...

A Study in Automatic Writing Transmitted by Geraldine Cummins Edited by Signe Toksvig Foreword by C. D. Broad `a very important book indeed, and one which should be obligatory...

This has not always saved him from attack by those whose interests lie elsewhere, and be- lieve that no one should be interested in any- thing except what interests them. He has...

Faithful Portrait? The Art of Biography. By Paul Murray Kendall. (Allen and Unwin, 21s.) NOT the least depressing feature of contempor- ary biography is the paucity of any...

Professor Kendall's thoughts and observations on what he rightly calls

this 'craft of the impos- sible,' although neither particularly original nor profound, are of interest and value because he has a genuine feeling for the extent, the fascina-...

In her first novel, The Cactus Land, Mrs. Stern looked

at apartheid through the eyes of a young African girl. This time her hero is a young . English South African, Sebastian, whose Boer fiancee deserts him in favour of her...

(7'his week Nicholas Davenport writes on page 345.) only can we now look forward to a lower Bank rate, which is good ' for all markets, but the chances of an election early...

ONE in every five families contains someone who is mentally

ill--so we are reminded in the current campaign. I find myself wondering how it is pos- sible to arrive at this statistic. Are these actual illnesses which have been reported on...

give a bonus of a week's extra paid holiday to

every employee who has not been off work through illness in the year.) Whenever I see that advertisement—I hate it so much I have never even looked to see what sadist issues...

Such questions, lazily spiralling up like cigarette smoke to the

surface of my mind every time I see the poster, are not meant to belittle the cause. Nor do I think I feel any personal need to under- rate the number of people involved in...

Raymond Postgate's plain men having all graduated to Morton Shand

'and Warner Allen, It is the plain boys growing up (and presumably the plain girls, for they'll need some consolation) who will disburse their 18s. on the new edition that...