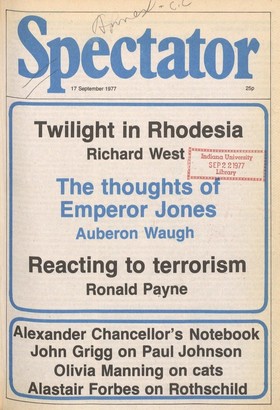 Another Paul's conversion John Grigg Last week Paul Johnson announced his defection from the Labour Party, to whose interests he had not been conspicuously devoted for some...

There are people in the Conservative Party, including a few MPs, who believe that because the trade unions are rather unpopular at the moment this is a good oppor tunity to cut...

According to Lord Edward Cecil, in his magnificent book, The Leisure of an Egyptian Official, 'No Egyptian ever profits with experience'. It is a generalisation with which 1 am...

'The bastards won't back us!' Auberon Waugh In reply to the smear of "The Buggers Won't Work" the workers of the UK have every , reason to say of the media, and of some Boards...

Ronald Payne Terrorists international have again exasperated everybody by striking in three places within one week. In West Germany the recidivist Baader-Meinhoff gang shot...

Nicholas von Hoffman Washington Apparently the two dozen South American dictators imported for the signing of the Panama Canal Treaty, have been schooled in the locals'...

Richard West Salisbury The white Rhodesians have not lost their love of self-dramatisation. When I was last here in 1964, even before Ian Smith's Unilateral Declaration of...

Antonia Martin Animal Welfare Year has just ended and with it a brave and on the whole successful attempt to bring together the most fissiparous body of individuals this side...

Cecil Parrott Since world attention has been focused on human rights, the favourite occupation of politicians and press in Czechoslovakia has been to point a finger at the West...

Max Harris Adelaide The Woclehousian days of publishing are not all that far behind us. Publishing was, in fact, a gentleman's profession, and processions of willowy young lads...

Humphrey Phelps In 1919 the Forestry Commission was instituted in order to grow timber 'sufficient to meet the essential requirements of the nation over a limited period of...

Sir: John Grigg's admirable warning to the Tories over Grunwick (10 September) will encourage floating voters such as myself to veer in their direction. Unhappily of late the...

Sir: Mr George Gale's column in your issue of (23 July) concerning the monopoly power of trade unions is surely a major contribution towards resolving the supposed dilemma our...

Sir: Mr Benny Green has, in the issue of 9 September, pointed out what I realise, far more acutely than he possibly could, that I'm no authority on the catch phrases originating...

Sir: As one of those who marched at , Lewisham perhaps you will allow me to reply to the letter from Mr Aulesbrook (27 August). In spite of what Mr Aulesbrook may think, the...

Sir: I am grateful to George Hutchinson (3 September) for letting me off so lightly in my attempt to portray a very complicated man in my book The Odyssey of Enoch. In the final...

Sir: Mr Foley's article about Vit. B17 is typical of American journalists who follow the line taken by the U.S. Food and Drug Administration which claims B17 (Amygdalin,...

Sir: It is obvious that Mr George Lanitis' letter (27 August) that even the press counsellor of Cyprus lacks a sense of humour— as I find do the rest of his countrymen (I'm...

Sir: Editorial excisions, due to unforeseeable last-minute production difficulties which have since been explained to me, of a sizeable part of my review of Cecilia Sternberg's...

Sir: I hope that you will allow me space to correct a misstatement of fact in Mr L Clarke's letter in your issue of 29 August. He writes that had Ian Smith not made UD1, and had...

Sir: I was most heartened by Logie Bruce Lockhart's analysis of the current upper school education system (13 August). As a student in my second year sixth form at a London...

Sir: In his review last week (issue of 3 September) Richard Ingrams (who edits himself, so ought to know better) describes Bob Edwards as editor of the People. This is not...

Up to a point Lord Rothschild Alastair Forbes Meditations of a Broomstick Lord Rothschild (Collins £6.50) From the full-page colour photograph on the back of the jacket of...

Robert Skidelsky On the Dictatorship of the Proletariat Etienne Balibar trans. Grahame Locke (NLB £6.50) The polemics of French Communists may not have the most obvious appeal...

Olivia Manning Somewhere a Cat Is Wafting Derek Tangye (Michael Joseph £4.95) The EverlastIngCat Mildred Kirk (Faber & Faber £4.95) Mr Tangye's book came to me when I was in...

Benny Green Carr's Dictionary of extraordinary English Cricketers (J. L. Carr 20p) Most of the world's great ideas are simple ones, and Mr Carr is to be congratulated for...

Good Queen and bad Rodney Milnes Each of the three national opera companies launched its first new production of the season last week, with a score of one bull's-eye, one...

Exiles Ted Whitehead The Old Country (Queens) A Mad World, My Masters (Roundhouse) Only disconnect — that seems to be the ticket for Hilary, the exiled hero of Alan Bennett's...

Translations John McEwen The motto of the Flyfishers' Club may be that 'there is more to fishing than catching fish' but on the whole the English are not a very metaphysical...

Hooked Richard Ingrams The debate on TV violence has again reared its head, provoking pious sentiments from both channels to the effect that they will be keeping a vigilant...

Lousy punters Jeffrey Bernard The Psychology of Gambling edited by Jon Halliday and Peter Fuller, first published by Allen Lane in 1974 and now published by Pelican Books at...