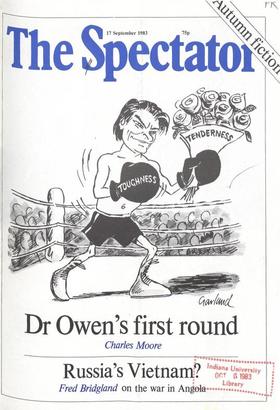 Dr Owen's model Charles Moore Salford In his 'keynote' speech to the Social 1. Democrats on Monday Dr David Owen invited them to 'look to the future'. Said like that, it did...

I n a letter to the Spectator this week ( page 19) Sir Stephen Spender announces that he has withdrawn an article he has writ- ten for the Literary Review because of a Piece...

The wrong idea Auberon Waugh 1\To doubt the Ionian island of Cephalonia, or Kefallinia as the ig- norant Greeks insist on calling it, was a sen- sible place for Common Market...

Fred Bridgland W ith world attention in Africa focused on the struggle for Chad, the biggest nattle yet in the more important eight-year war for the southern African state of...

Nicholas von Hoffman Washington or the past seven days the way for a ,anY publican in America to get himself -11"` th e name of his bar on television was to lake his two or...

A man of violence

Richard West T he high points of the career of Johannes Balthazer Vorster included imprisonment in 1942 for his position in the Ossewabrandwag (or 'Ox-wagon Fire Guard), a...

T imothy Garton Ash What is the difference between commu- nists- and Christians? Christians believeinlife after death; communists in Posthumo us rehabilitation. and capitalism?...

Olivia O'Leary Dublin T w°years ago Provisional Sinn Fein, the apologists for the IRA, sewed a phrase into Irish political hackery when they boasted in Dublin that they could...

The vanity of Mr Scargill

Peter Paterson T hroughout last week's Trades Union 1 Congress the cameras and the reporters of the media circus were in pursuit of miners' president Arthur Scargill who was...

Roy Kerridge 'M y dear fellow, you should always begin a story with a fragment of con- versation. That's the advice I always give to young writers.' This story begins in the...

Usurers lack friends Jock Bruce-Gardyne I do not know whether Nigel Lawson and his mandarins are hard at work on a brand-new tax for the banks in next year's Budget but 1...

The stubble's for burning Sir: I am somewhat irritated by Richard Ingrams and P.J. Kavanagh, who litl y , e both recently had a moan about stubble burning when it is quite...

Burglars are taking so kindly to the knife and the revolver that even the police are startled. Within the past fort- night, four or five cases have occurred in which interrupted...

Sir: Brian Sewell's article 'The tale of Anne Killigrew' (27 August) is full of sound and fury, but not of facts. The picture was offered under the private treaty arrange- ments...

Sir: Christopher Hitchens must be congratulated on his dexterity in writing an article on Trotskyists in industry (3 September) without ever dealing with the fact that they are...

Sir: I am amazed at the continued onslaught on John Cole's speech. I love it; it is so unlike our local brand of north Somerset dialect, which, void of consonants, slurps out in...

l ast As Elizabeth Jennings so aptly wrote in l ast week's Spectator, 'Anyone who gains Pre stige or notoriety today is constantly questioned about the more persorAl parts of...

Sir: I wonder why the gifted Jeffrey Bernard has suddenly become a target for cruel attack? He does not set out, does he, to report facts? He doesn't expect us to believe him....

S, ir: On reading Paul Johnson's comments p la the spectator (3 September) on Roald ahl's article about Israel which appeared in the LiterarY Review, I at once telephoned the...

How did it go off course?

A windbag and a miniaturist

Angela Huth I n Perfect Happiness Penelope Lively concerns herself with the subject of loss' This, so often in the past, has proved a dangerous subject, particularly in the...

Francis King Brothers w hereas most present-day English novelists chirp and twitter from under domestic eaves, Bernice Rubens tends to opt, with commendable bravery, for the...

Christopher Hawtree Other People's Clerihews Chosen by Gavin Ewart (Oxford University Press £5.95) T t has long been received wisdom that the best Clerihews were written by...

The odd couple Peter Ackroyd Return Engagement (15 ', Screen on the Green, Islington) T his is something of an oddity: a film about an American pantomime horse, hi which the...

Imperfections Maureen Owen A ccused by Radio Northampton of wilful ignorance on the subject of what the BBC are doing for the unemployed, I sat glued to local radio for an...

Misplaced Richard Ingrams least one fairly welcome sight greeted I. In e on Monday this week, to wit Sue ips — te5' reading the Nine O'Clock News on 13C1 instead of the...

Wonderland Taki Mykonos T is the randiest place east of Fire 1 Island. The spirit of the ancient gods of Olympus — a terribly sexy bunch who did nothing but eat, drink, dish...

Tankful Jeffrey Bernard The low life isn't always that low. Some- ' times it's q uite cosy down here in the g utter and if you had been with me in Paris last Sunday you too...

Report by Jaspistos: Competitors were ask- ed for a piece of plausible and entertaining prose in which the names of 15 birds are hidden, as `coot' is in 'rococo ottoman'....

Spectator Wine Club Auberon Waugh brussels sprouts in any civilised country. well spent. T know nothing about Spanish wine and seem to me to represent Spanish value for The...

Behold behemoth Raymond Keene W hile I was at Niksic it was amusing to ,, listen to the verdicts of some of Gary un Ika.sgarov's competitors: 'He doesn't l ders (and weak...

T he Social Democratic Party, meeting in Salford, decided that, at least for the time being, a merger with the Liberals was undesirable. Dr David Owen, the party's leader, said...