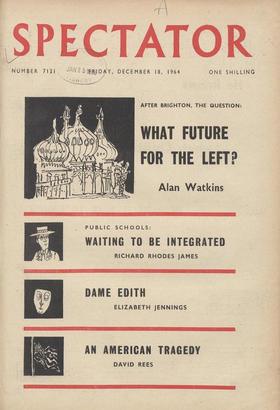 AFTER BRIGHTON, THE QUESTION:

WHAT FUTURE FOR THE LEFT? Alan Watkins

—Portrait of the Week— HINTING ON TV at an election

'in the spring of 1969,' the Prime Minister led the Labour Party at Brighton through a post-mortem on the Brat fifty of these thousand-plus days of dynamic action. Mr. Brown...

x Africa semper aliquid novi. There .Ed is always something new in Africa. And always a new assessment of the leading actors. Such diverse characters as Banda, Nyerere and...

The designated regions are large. This has caused some heart-burning, notably in Mersey- side and Sheffield, which see themselves at least as economic sub-regions, if not full...

DREW MIDDLETON writes from Paris: By now it is an article of faith in Gaullist circles that whenever an American President and a British Prime Minister confer, France catches...

work- . ings of the Crathorne committee on the law of Sunday observance. First, an antiquated state of affairs is permitted to persist for an in- ordinate length of time. Then...

From SARAH GAINHAM BONN W eider•vereinigung — reunification; alwaya officially and usually unofficially, the word means the rejoining of Central Germany, or the German...

The First Birthday, and the First President

AARON SEGAL writes from Nairobi : Kenya celebrated this week its first birthday as an independent State together with the inauguration of Jomo Kenyatta as its President under...

A correspondent in Paris writes: Paris in the course of the NATO council meeting this week was hardly different from Brighton last weekend. Mr. Wilson's proposals —or lack of...

What Future for the Left? By ALAN WATKINS For, year after year, the same people seem to be there on the National Executive. Mr. Jack Jones may come, and Mr. Fred Mulley may go,...

The status of the colleges of technology tnu%t be enhanced so that they were not considered con- tinuation schools. Let them have blazers and badges. —Lord Balerno in the House...

I see that the Congolese Government has arrested the 'literary agent' of the former `Foreign Minister' of the Stanleyville regime, Mr•. Kanza, for his part in the events that...

It was because the hon. Gentleman made exactly that type of speech when he was recently on the Continent that our difficulties have been greater than they should have been.' A...

The Language of Priorities I am often baffled by the

way the people who run television ignore their real opportunities. Last weekend provided a ludicrous example. After a spate of preliminary press and television pub- licity, the...

Everyone hates seeing a great horse beaten, but it is perhaps as well for steeplechasing that Arkle didn't win the Massey-Ferguson Gold Cup at Cheltenham. Arkle and Mill House...

in the hour of its defeat, and he did more perhaps even than Rab to steer it to victory. He ranks with Joe Chamberlain as the greatest party boss that this country has seen. He...

By ELIZABETH JENNINGS M UCH more is expected 'of poets who are women, I think, than of those who are Men. Their sex is constantly mentioned, if not in a crude way, then at least...

The Argyll Decision By R. A. CLINE W HAT song the sirens sang and whether Mr. Justice Ungoed-Thomas made new law this week in the case of Argyll (Duchess of) v. Argyll (Duke...

By BRIAN BEHAN I HAVE always liked graveyards. For reasons I could never understand I love to wander through old' country churchyards trying to make out the time-eaten...

Waiting to be Integrated

By RICHARD RHODES JAMES T TEACH in a public school. And so my world is less certain than it was. There is, in fact, precious little hush in the close these days. With the...

From MURRAY KEMPTON NEW YORK T Fne. Republican Party, after six months as his prisoner and victim, must have passed from Barry Goldwater's control. The best evi- dence would...