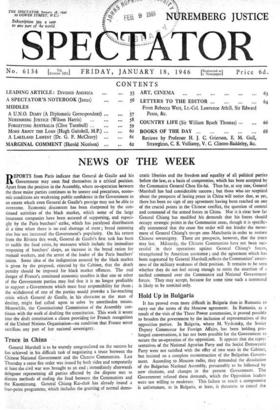 R EPORTS from Paris indicate that General de Gaulle and his Government may soon find themselves in a critical position. Apart from the position in the Assembly, where...

Truce in China • General Marshall is to be warmly

congratulated on the success he has achieved in his difficult task cif negotiating a truce between the Chinese National Government and the Chinese Communists. Last Thursday a...

Hold Up in Bulgaria

It has proved even more difficult in Bulgaria than in Rumania to carry out the terms of the Moscow agreement. In Rumania, as a result of the visit of The Three Power commission,...

A matter of the highest constitutional importance, which strikes at the very root of the fundamental conceptions on which the United Nations Charter is based, arose in Tuesday...

Mr. Shinwell will do well to make. full use of the report on re- cruitment to the coal-mining industry which has been presented to him by the Mining Association. The report...

Mr. Herbert Morrison follows a distinguished tradition of British politics in making important speeches on policy in the country as well as in the House. He has not been without...

The Board of Trade Pother

Mr. Ellis Smith in his address to his constituents on Sunday seems a little to have overdramatised his resignation from the Parliamentary Secretaryship of the Board of Trade, a...

O NE of the decisive results of the late war has been the rise of the United States of America to a position of almost unchal- lenged pre-eminence among the nations of the...

T HE idea that Mr. Churchill might be the first Secretary-General of U.N.O. lends a certain zest to life. I see that optimistic stress is laid on the fact that when die...

By A DIPLOMATIC CORRESPONDENT T HE General Assembly of the United Nations, which met in Central Hall, Westminster, for the first time last Thursday afternoon, can look back on...

By WILSON HARRIS I T needs a visit to Nuremberg to gauge the full depth' of Ger- many's defeat. Not that there is any danger of underrating the immensity of the avenging...

By CLIVE TURNBULL I N a book on The Australian Language, published not long ago, Mr. Sydney J. Baker refered to the Australian "philistines who still talk of England as Home,...

MORE ABOUT THE LOAN

By HUGH GAITSKELL, M.P. N 0 useful purpose would 'be served by re-opening the Loan debate. Parliament has made its decision and there is little doubt that the country generally...

• A LAKELAND LAMENT By G. F. McCLEARY I T is

to be hoped that the protests aroused by the threat to Ennerdale Lake may do something effective to check the relentless march of "industrial development" that has for years...

By HAROLD NICOLSON I T HAVE always regarded man as among the noblest of animals. I have convinced myself that our gift of memory enables us to profit, as no animal can profit,...

Paintings of English Impressionists. As a sort of unintentional poultice to the abrasions caused to the public sensibility by the pyrotechnics of Picasso and the miniature...

"ft might Be You." General release. — "Britain Can Make It. No. 1. ' Non-theatrical release.—" Whistle Stop." At the London • Pavilion. - - THE Ministry of Information -presents...

Sut,—As the representative of an American publication I have been attending the trials of the men who have been charged under the Treason Act of 1351, and I would like to...

BLACK AND WHITE IN ETHIOPIA

Sitt,—In a letter which appeared in your issue of January tith Mr. Merlen was concerned about two points arising from my recent article in your columns. He feared that it might...

Sta,—I was glad to read Mr. Hutchinson's letter entitled "Laws and the People" in your issue of January nth. Too much prominence cannot be given to the points which he raises,...

Sm,—The Dean of Christ's College, Cambridge (one expected better things from Cambridge), advocates "population control," evidently meaning restriction, because if there are too...

Su,—As I was in the Women's Section of the Singapore Internment Camp, and was therefore a fellow internee of Mr. Bennitt's, I was much interested in his article "Legacy of...

SIR,—Your Art critic has given us his opinion as to the dirtiness of the Picasso paintings. Mr. Harold Nicolson has now stated his view of their ugliness. But when mere...

Sift,—Why should Bob Cratchet be classed with Dick Turpin and Jack the Ripper? It seems that for once the wise and witty Rose Macaulay has made a little mistake. I hope she will...

AIR TRANSPORT AND THE R.A.F.

SIR,— I have read with considerable interest the article and correspondence on this subject in your columns. My own experience and the fact that I have to fly again shortly ....

VILLAGE SCHOOLS SIR,—In your issue of January 4th a correspondent

from Gloucestershire calls attention to the dangers likely to follow from the closure of village schools. I am very glad to see her letter, as this kind of plan is being...

POLITICS SIR,—In The Spectator of January 4th it was pointedly

asked in the Editorial Notes if the Conservative Party was "capable of making an equally vigorous and intelligent appeal" to the electorate to that of the Labour-Socialist...

"DEAD TOULON" SIR,—As one of the "much travelled and infinitely

more tolerant soldiers" appealed to in his letter in The Spectator of January rith, may I say how strongly I resented F. C. Hainsworth's scurrilous attack upon "British...

SOME years ago readers of The Spectator mos; generously provided a good part of the funds, desired for the bird obsertatory on Skokholm Island which has become famous among...

Damage from the Gales

It is inevitable in any considerable gale that a number of elm trees crash, the only exceptions I can remember were in the years following the notorious hurricane of 1916, Which...

Preservation of England kis to be hoped that the preservers

of England—the local rath . ei than the central—will show some measure in their protests against the substi- tution of use for beauty. Now it seems to me (judging largely from...

In My Garden For the third consecutive month we are

still pulling faggots of delicious flowers from a few roots of Iris Stylosa, which is the one specie of the tribe that enables Iris fans to claim that you may pluck a blasom in...

The Riddles of Asia

Solution in Asia. By Owen Lattimore, with a preface by C. P. Fitz- gerald. (The Cresset Press. 7s. 6d.) IF the reader neglects to read Mr. Fitzgerald's admirable- preface to...

Battle of the Tanks

Our Armoured Forces. By Lieut.-General Sir, G. Le Q. Mane!. (Faber and Faber. 21s.) IT seems probable that the battle of the tanks, about which we only heard rumours during the...

Nunwell Symphony. By C. Aspinall-Oglander. (Hogarth Press. 15s.) IN spite of its dissuading title, a florid heraldic wrapper and a singu- larly ugly arrangement of type, this...

By CUSTOS Mn. EDWIN FISHER, the chairman of Barclays Bank, who as usual is the first to make his annual statement, gives us a balanced survey . of the banking position without...

PEACE-TIME PROBLEMS THE fifty-first ordinary general meeting of Barclays Bank, Limited, will be held at the Head Office, 54, Lombard Street, London, E.C., on January 23rd. The...