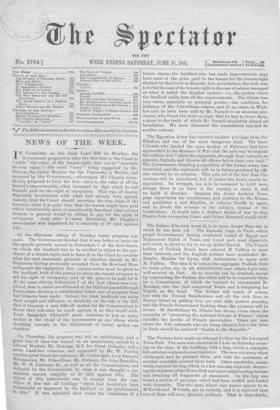 I N Committee on the Irish Land Bill on Monday, the Government proposed to alter the direction to the Court to "settle" the value of the tenant-right, into one to "ascertain its...

The Egyptian Army has extorted another privilege from the Khedive,

and one of the most dangerous kind. The three Colonels who headed the open mutiny of February 2nd have represented to the Minister of War that the only way to content the...

On Thursday, the progress was not so satisfactory, and a

great deal of time was wasted on an amendment, moved by a Liberal Member, Mr. Heneage, M.P. for Great Grimsby, and a great Land-law reformer, and supported by Mr. W. Fowler,...

The Fenians have made an attempt to blow up the

Liverpool Town Hall. Two men were observed at 1 a.m. on Saturday morn- ing on the steps of the building, with a bag, which a constable felt satisfied contained some explosive....

4* * * The Editors cannot undertake to retur97, Manuscript in any

At the afternoon sitting of Tuesday better progress was made.

The Government decided that it was better to leave out the specific grounds named in Subsection 5 of the first clause, on which the landlord was to be entitled to object to the...

The Sultan, if he only knew it, is in more

danger than any in which he has been yet. The financial rings in Paris, which propel Governments, having swallowed Ismail of Egypt and Mahommed Sadok of Tunis, and found each...

THE DIVISION OF THURSDAY NIGHT. T HE small majority by which the Government defeated Mr. Heneage's amendment on Thursday night, is at once dis- creditable to the Liberal...

T HERE is scarcely any problem in social organisation , more perplexing or more imperfectly solved than that of quelling Mob resistance to a process of law. In every country of...

T HE launch of the 'Polyphemus' on Wednesday has an interest which is by no means exclusively Naval. No invention could mark so well that "the old, simple, violent life," as the...

T HE effect of the rebuffs recently suffered by M. Gambetta is, we think, exaggerated, The Senate has rejected the Scrutin de Liste, and the Republican parties have declined to...

THE TOLLS ON INVENTION.

T HE position of Patent Reform in Parliament illustrates painfully the position of all-important public business. The whole community desires a reform of the existing Patent...

THE LESSON OF A CITY SUNDAY.

T HE St. James's Gazette of Monday contained a Census of the Congregations in the City Churches at the morning services on Sunday, May 1st last. The numbers present are arranged...

THE NEW DISCOVERY AND THE OLD DISCOVERY.

T HERE is something pathetic, and even, in Carlyle's sense, tragic, in the avidity with which Man's imagination seizes on the marvels of physical invention, and hopes that by...

THE SMALL SQUIRES OF A CENTURY SINCE.

T HE Ti9no8 of Saturday, in an article about Agricultural Shows and everything else, repeats a question often put in country districts, which appears to be a groat trouble to...

familiar) wished it could. Neither can ordinary mortals—not e

to keep up a certain amount of rough hospitality ; but if he did emperors, but mere men of affairs, who are in the thick of life— leave letters unopened, as Napoleon did, with...

LORD SALISBURY. CT° THE EDITOR OF THE " EPEOTATOR1 SI11,—Disliking as I do a good deal of Lord Salisbury's later opinions on foreign policy, I am, nevertheless, one of those...

[TO THE EDITOR OF THE SPEOTATOR.1 Sta,—It appears to me that "A. W." might ask himself 'whether, when a great writer has himself published some thirty-five most excellent...

(TO THE EDITOR ON THE SPECTATOR.") is probable that there are a good many English people -who still hold that there is no such thing as a theory of educa- tion, and that it is...

rre THE EDITOR OF THE " EPEOTATOR.1 Silt,—Mr. G. D. Snow thinks it an " unpardonable " offence in the Revisers of the New Testament to have used " love " for "charity," in I....

A PLEA. I. 0 YE iu all the world. who love true Song, Be gentle to the Singers who uplift In innocent delight a cradle gift,— So often found to work them fatal wrong. Judge...

THE REVISED VERSION OF ROMANS VIII,, 3.

[TO TER EDITOR OF TRH .SPECTATOR.'] Ssa,—I am not going to add one other to the many letters which have appeared respecting the general character of the Revised Version. I...

Ere THE EDITOP. OF TliE " SPECTATOR,1 am glad to apologise to Miss Cobbe for having inadvert- ently misstated her argument, as published. But that 1 am not answerable for "...

THE UNPOPULARITY OF SALMON. [To Tux EDITOR OF THE "SPECTATOR.")

Sfu,—In reference to this subject, it may interest you to know that in Ochs' " Gesoldchte Easels" (a comprehensive work, in; several volumes), it is related. that in the year ....

THE FRENCH PLAYS AT THE GAIETY.

['TO TRH EDITOR OF TIIR `. SPRETATOR.] Sne—Last year, I had to correct your reporter on French , Plays on a matter of fact ; and this year, I have to do the same. There has...

AMONG THE HILLS.* HAD this story been published anonymously, "within a mea- :surable distance" of George Eliot's Silas Marne'', the world would have taken it, and not without...

NEPAUL.* THE recent death of the Maharajah, or King, of

Nepaul, and the accession to the throne of his youthful grandson, gives peculiar interest to these two volumes, which contain the experiences of a gentleman who resided in an...

THE REVISED NEW TESTAMENT FOR TEACHERS.* MANY books will be

written, and much time must pass, before the Revised Version can take its proper and accepted place. Individuals will form their own views, but it will be long before general...

MR. GREENWOOD ON THE LAND-LAWS.* THE Daily Chronicle has done

well to publish the popular suramary of the case against the Land-laws, which Mr. Green- wood now reissues in pamphlet form. There are two objects to be attained by the popular...

"FAR as the eye reaches, we are ruled by Fashion," says a German, who aspires to regenerate mankind and civilisation by the music of the future ; "for it is not an accidental...

AYALA'S ANGEL.* Wiria are Angels P is a question to

which very various answers may be expected, and certainly Mr. Trollope's opinion on the subject appears to be widely different from Spenser's. For in the beautiful description...

ancient history so rapidly, and its most dramatic incidents have already been described so exhaustively, that we opened this book with a sense of impend- ing weariness. Not...

POETRY. Vane's Story, TVeddah and Om-El•Bonain, and Other Poems. By James Thomson. (Reeves and Turner.)—The poem called "Vane's Story" we may pass over with brief comment. The...

The E'asterti* Archipelago. By W. H. Davenport Adams. (Nelson and

(Cassell and Co.)—Wo fear that Wood Magic must be pronounced a failure. Mr. Toffories, as all the reading world knows, is intimately acquainted with tho rural life of England....

for Pro- moting Christian Knowledge.)—Of late the Slav has decidedly come to the front, and a little book about him and his past history will not be unwelcome. Dr. Maclear is a...

Outhberht of Lindisfarne his Life and Times. By Alfred C.

Fryer. (S. W. Partridge.)—Mr. Fryer has studied his subject with care, though he has not, in a very largo degree, the power of presenting it with vividness. His description of...

Aristology ; or, the Art of Dining. By Thomas Walker,

Ice, Edited, with Notes, by Felix Summerly. (Bell and Sons.)—hi,„ is a very welcome, and should be a very useful republication. IA, Walker was sometimes a little eccentric in...

(Longmans and Co.) —This little book is meant as a protest against what the author con- ceives to be the unwarranted assumptions and materialistic tenden- cies of modern...

The Migration from Shiner. By Captain G. Palmer. (Hodder and

Stoughton.)—This little volume, which deals mainly with the peopling of America, is merely made up of extracts from well-known writers, such as Humboldt, Prichard, Sir W. Jones,...

Spirit and Form. Sermons, preached in the parish church of

Leatherhead. By Edwards Comerford Hawkins, M.A., Head Master of St. John's Foundation School. (C. Kegan Paul and Co.)—Mr. Hawkins is a schoolmaster, and what he has to say to...