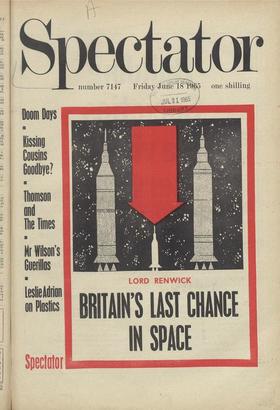 rrLIE Government has never looked more I like an administration moving towards disintegration than it did as Parliament re- assembled this week. It floundered on in the economic...

Portrait of the Week— THE TRADE FIGURES for May gave

everyone the willies—imports up £24 million, exports down otm.. trade deficit wider by £19m.—though Mr. Jay said it was only 'a statistical accident.' Wall Street slid and...

Kissing Cousins Goodbye? M R. FRANK CoUsINS has had much to put up with. Instead of a position of command- ing influence, overseeing the industrial scene in fact if not in...

Too Clever by Half?

W LIEN the American bombings in Vietnam first started, the Prime Minister probably made a simple calculation : that they would soon be over and that the best thing to do was to...

Atlantic College A. D. C. PETERSON • M. L. Rosenthal on William Carlos Williams One year's subscription to the 'Spectator': 15s. (including postage) in the United Kingdom and...

IJILARY SPURLING writes: 'Homage to T. S. Eliot' on Sunday evening had the same smooth way. 'neither diffident nor ostentatious,' with heterogeneous material as one of Eliot's...

Thomson and 'The Times'

CHRISTOPHER BOOKER writes: Amid squid-like clouds of the blackest secrecy. plans have been laid over the past few weeks for the biggest earthquake in newspaper ownership since...

Mr. Wilson's Guerillas By ALAN WATKINS H OW much longer can Mr. Harold Wilson keep up his apparent support of American policy in Vietnam? Has he, indeed, already begun to...

Great Names From the Thirties

MURRAY KEMPTON writes from New York: The election of a mayor of New York is the only political event of consequence facing Ameri- cans next fall. The Republicans have the...