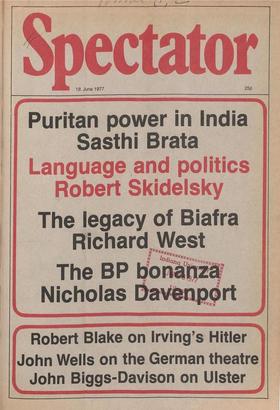 Not for the first time, electoral considerations have knocked some sense into the heads of those who frame Labour Party policy. It had looked as if the party's national...

The great honours muddle John Grigg When people bother to discuss the honours system at all they usually discuss its allegedly scandalous aspect — the sale of peerages and all...

The Commonwealth conference is over at last, after a 'sharp discussion' on human rights and the Ugandan question. 'Still, the Commonwealth leaders managed to agree on the great...

A year for yobelling Auberon Waugh Poor old Britain. Hic. Used to be such a great little country for people like us. How the film of the Coronation brought it all back. All...

Sasth Brata Since Nehru's death, Morarji Desai has been driven by a simple creed. He believes he is the best man to be Prime Minister of India and, more importantly, he frankly...

Richard West The tenth anniversary of the start of the civil war in Nigeria has arrived, most approp riately, when most of black Africa is in chaos and Britain is acting as...

Robert Skidelsky Public language is in a state of decline. George Orwell noticed it in his essay 'Language and Politics' written in 1946. The American, Edwin Newman, wrote a...

Colin Bell Edinburgh The Scottish Liberal Party must be a most important animal: after all, how many other parties can claim that two-thirds of all their MPs are Privy...

Christopher Booker A few weeks ago I reviewed in these columns a new book by Mr Paul Johnson, called Enemies of Society. I am afraid that, like one or two other reviewers, I...

The BP bonanza Nicholas Davenport What has been slowing down the market . ; on the Stock Exchange was not so much the Jubilee jamboree as the levelling of books, the build-up...

Sir: May I suggest a slight but significant amendment to Nicholas Davenport's public unit trust scheme? (4 June). The aim – capitalism for all – must surely be backed up by an...

Sir: Unless there was a misprint Mr L. R. Pettigrew, whose letter criticising British representation in Thailand you published on 28 May, seems to have got his facts wrong. When...

Sir: Not many people, myself included, would agree with Richard West (4 June) that Toledo Cathedral was the 'grandest' in Spain. This word, as far as it applies to cathedrals,...

The case for Afrikaners Sir: Attacking the antics of Messrs

Fuehrer's side of the fence Robert Blake Hitler's War David Irving (Hodder & Stoughton £9.95) Mr David Irving is not an uncontroversial historian. The rows about his books on...

Alan Watkins Part of my Life A. J. Ayer (Collins £6.95) Most writing is hard work, if the result is to be worth anything; and writing a good book, or indeed a book of any...

Peter Ackroyd in a Dark Wood Marina Warner (Weidenfeld and Nicolsoli £4.50) First novels generally wobble with a mild but uncontrollable excitement: can I get everything in? I...

Benny Green Three Men In a Boat; Diary of a Pilgrimage; Three Men on the Bummel Jerome K. Jerome (Spring Books £2.50) Even the most ethereal masterpiece requires for its...

The taste of the time Huon Mallalieu One of the numerous lots which raised eyebrows as well as bids at Mentmore was an album of brown wash, drawings by Lieutenant-Colonel...

Anthony Coleridge The dismal cries of our contemporary jeremiahs, lamenting the increasing amount of furniture and works of art leaving this country, are at least accurate...

Foxed Rodney Milnes The best thing about the revival of The Cunning Little Vixen at Glyndeboume is that it has been given a curtain-raiser and can thus — the ninety minutes of...

Sad Romeo Jan Murray I don't know if Nureyev has been influenced by recent bouts of filming with Ken Russell, but certainly his own new production of Romeo and Juliet, for...

Egotist on the loose Clancy Sigal Una Partie de Plaisir (Camden Plaza) La Cecilia (The Other Cinema) Much of my psychic life has been spent in west or north London flea pits —...

Hayward John McEwen The first thing to say about the inauguration of the 'Hayward Annual' shows (Part 1 till 4 July) is that the idea is excellent and long overdue. Every...

Unhappy Richard Ingrams Of all the dreadful commercials currently being shown on ITV the one that annoys me most is an animated cartoon of a bird sitting on the top of...

Just the one Jeffrey Bernard Of all people who take themselves too seriously the racing classes ought to plead guilty and I mean more guilty than even those in the...

Marika Hanbury-Tenison The Victorians stuffed their children so full of spinach, usually overcooked and swimming in water, because it would 'do them good' that it is little...