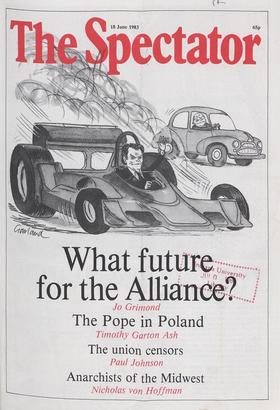 t sounds like mere commonsense to say I that there is something 'unfair' about an electoral system in which a party can get almost the same popular vote and yet scarcely more...

The Times made an extraordinary 1 announcement on Monday. This was that Mrs Thatcher, after giving Mr Whitelaw his hereditary viscountcy, `intends to ennoble two or three more...

Now let's bomb Russia Auberon Waugh T ike many if not most Spectator readers La I imagined that Kenny Everett was a famous footballer, and so was rather shock- ed to learn...

Taking care of the money

Charles Moore B oldly transferring his epithets, Mr John Silkin describes the removal of Mr Francis Pym from the Government as 'an insolent example of Mrs Thatcher's con-...

What next for the Alliance?

Jo Grimond P e first feature of the election is that once again we have a government bas- ed on a minority of the electorate. Once again the third party is ludicrously under-...

Allan Massie Edinburgh A t first it was going to be an election .L - A.in which Scotland decisively marked off its difference from the rest of Britain, rejected the Thatcherism...

The Pope in Poland

Politics and the police

Sam White Paris T his is proving to be a long and exhausting summer. After the students, the farmers, the doctors, the lawyers and the shopkeepers, now the police have taken to...

£200 Chess Prize For details of the first Chequers Chess

Anarchists of the Midwest

Nicholas von Hoffman Washington T he best reconstruction of what took place in the scrubby hill country of north-east Arkansas on the evening of 3 June runs like this. That...

Richard West Tt is true what they say about Los Angeles; 1 that only joggers and people with dogs are allowed in the streets on foot. The members of the committee for next...

The marriage with a Deceased Wife's Sister Bill passed its second reading in the House of Lords, on Monday, by a majority of seven (165 for it and 158 against it), the division...

The union censors Paul Johnson WI ile Mrs Thatcher was piling up her new majority, Fleet Street was sink- ing deeper into the grip of monopoly trade unionism. The Observer was...

Sir: In 'Following Friedman' (28 May), Tim Congdon says that our procedure when making a medium-term forecast is to 'ex- amine the economic data for the last ten years, add them...

Sir: Mr Brooke is kind to try and cheer me

1 M about the fate of our dry-stone walls (Letters, 11 June). He says the farmers are bound to rebuild their walls because the stones Will spread over their fields, and what...

Sir: 'Is there any editor in Fleet Street prepared to operate such a system?' asks Alexander Chancellor in the Notebook of 28 May in an article attacking my Right of Reply in...

Sir: Simon Jenkins's article on the Belgrano affair (11 June) is a curious mixture of mistakes, omissions and failure to ask rele- v , ant questions. The Belgrano was not an...

Sir: For me the most pleasant discovery of the election was that Dr Owen's agent in Plymouth was a man by the name of Mick Quick. Andrew Osmond 24 Kelmscott Road, London SW II

Wall and wire Sir: I don't know how they manage their dry-stone walling down there in Balham, i (Bryan N. Brooke's letter, 11 June), but it doesn't seem to bear much...

Sir: A printing error, omitting the word 'not', crucially upset

part of my article on the Belgrano last week. The war cabinet did not view the prospect of the war as one of `continuous triumph'. Precisely the reverse. Simon Jenkins 174...

The importance of trivia James Hughes-Onslow International Gossip: A History of High Society 1970-1980 Andrew Barrow (Hamish Hamilton £12) S cribbling away into the early...

David Piper The Intelligent Traveller's Guide to Historic Britain Philip A. Crowl (Sidgwick & Jackson £12.95) A guide to guides is becoming a desideratum. They press upon us,...

Miranda Seymour A Year at Hartlebury, or The Election Benjamin and Sarah Disraeli (John Murray £8.50) ur honeymoon being over, we have Vamused ourselves during this autumn by...

Lewis and Lewis John Juxon (Collins £10.95) C ir George Lewis was a Victorian institu- k, don, the only solicitor to enjoy the same kind of fame as the leading barristers of...

I I INTRODUCTORY OFFER I enclose I I I open to non-subscribers I I OTHER TALES by Roy Kerridge I I I I I I BESIDE THE SEASIDE I I I Subscription Rates: UK Eire Surface...

Dutch discoveries David Wakefield The Hague School: Dutch masters of the 19th century (Royal Academy) I t is rare nowadays to find an exhibition devoted to some totally...

Mathematical John McEwen Various exhibitions A nthony Hill is 53 and is now honoured by the Arts Council with a major retrospective of his work, in the form of abstract...

Marketing Richard Ingrams T he election over, BBC reporters felt able once more to assert their anti-Tory bias which they have been holding in check for the last three or four...

Inflation P. J. Kavanagh I t is a most off-putting title, but I am going to talk about a real, not a metaphorical inflation, that of balloons. In the last few days I found...

First prize Raymond Keene T hanks to the generosity of Aly Amin, the proprietor of Chequers Café (which formed the topic of David Spanier's article on 21 May), the Spectator...

Do you play chess?

Then you really must take "CHESS" The lively up-to-the-minute monthly magazine for chess players. CHESS not only improves your play but g ives you the inside news of what's...

No. 1274: Settling the accoun t Set by et Jaspistos: After a lifetime of end ing a mutually antipathetic relationship with your bank manager you win a huge sum on the pools....

JasPistos reports: Competitors were asked to versify a public notice in a cheery, demotic manner. It's always difficult to make the trite in- teresting, let alone amusing, and...

M any political careers were brought to an end by the general election, which resulted in victory for the Conservative Par- ty by a majority of 144 seats over all other parties....