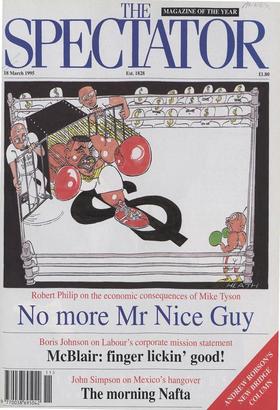 Peter Tatchell speaks. T he National Executive of the Labour Party gave approval to plans by Mr Tony Blair, the Labour leader, to rewrite Clause Four of the party's...

JAMES NAUGHTIE I know spring is coming because I have had the letter from Mrs C.W. Urquhart Smellie of Cumbria. February for her is a kind of pre-Lenten dark night of the soul....

These are distressing times for gentlefolk AUBERON WAUGH What follows is the edited text of a speech given to the Somerset branch of the Dis- tressed Gentlefolk's Aid...

GET OUT OF JAIL FREE: TO MAKE A BILLION

Robert Philip reveals the bottom line of professional boxing: Mike Tyson's conviction for rape was a smart career move, and now the ex-champion is set to reap the benefits ON...

Will - of the week Mr Maurice Frederick HURDLE, of 97

THE GREAT Latinist James Young, of the Sunday Telegraph, has pointed out to me the Shakespearian connections of bung, the sort of thing football man- agers and suchlike are...

THE HIGH COST OF FREE TRADE

The United States and Mexico have long had a troubled relationship. But this time, reports John Simpson, dollar-worship has gone too far Mexico City THESE ARE extraordinary...

Kevin Myers explains why Sinn-Fein/IRA will never, never, never give up their weapons Dublin ON 16 JUNE 1921, the Thompson sub- machine gun received its world baptism in...

persist.. . WHY DO people turn to crime? It is difficult to meet so many criminals and not to ponder this vitally important ques- tion. Last week, as I was reading in the...

Andrew Davidson reports on how English snobbery is making life difficult for the new chief of the Savoy Group, Ramon Pajares WHAT MAKES a grand hotel a great one? Answers on a...

DUAL CONSCIOUSNESS A GOOD DEAL of bewilderment and almost of consternation has been aroused in those who have studied some of the recent cases of French hysteria by the apparent...

GONG, BUT NOT FORGOTTEN

Nicholas Bethell reveals the Foreign Office's anathema against the wearing of foreign medals by British subjects ONE OF the most genuinely startling of Oleg Gordievsky's...

THERE'LL ALWAYS BE AN ENGLAND

William Waldegrave argues that doom-mongering about the Church of England is perennial — and misguided PESSIMISM, always the true English dis- ease, has never been more...

Mass-murdering monsters and a Belshazzar's feast in Copenhagen PAUL JOHNSON O ne of the most repellently hypocriti- cal events of recent years was the 160 - nation Poverty...

The last of the vast head offices now pick it up and shake it CHRISTOPHER FILDES I urge James Wolfensohn to have the World Bank moved to Sydney. He is its new chairman, he was...

Sir: Mr Geoffrey Wheatcroft, an amusing and Committed Writer, in his meditations on Ireland and the `unchicness' of Ulster (`Seeing red at Orange', 18 February), notes that I...

Sir: It is far easier and more fashionable these days to denigrate rather than praise public figures. Australians call it the 'Tall Poppy Syndrome'. In addition, the British are...

Sir: Do you mind if I feel slightly libelled by your letting Fred Halliday and Oleg Gordievsky call me (Who are you calling an agent of influence?', 4 March) a 'Conserva- tive...

Sir: Whilst yielding to no one in my admira- tion for Sir John Hall, and being unstinting Me Demi Moore. You Michael Douglas.' in my gratitude to him for buying my for- mer...

Sir: Radek Sikorski (Letters, 11 March) will have to try

harder if he wants to pin me down as a Soviet mouthpiece. In the letter to the Guardian from which he quotes, he significantly omits my criticism of the Sovi- et role in...

Sir: Messrs Hall and Waterhouse protest too much. Their arrangement

with their agent is no concern of mine. Furthermore, I have checked with my bank (not Barings) and I learn that the sum of 15 guineas in the mid-1960s is the equivalent of some...

Girl B or not girl B, public money for health cannot be supplied on demand SIMON JENKINS I once fondly imagined that the obsession of the British tabloids with 'human...

Bantambiog of a bantam Bevis Hillier CYRIL CONNOLLY: A NOSTALGIC LIFE by Clive Fisher Macmillan, £20, pp. 466 T wenty-five years ago I was a regular book reviewer on the...

No, but I'll see the movie

Charlotte Raven PLAYLAND by John Gregory Dunne Granta, £14.99, pp. 494 I hate to ask questions. In any event I am not interested in the answers — what I do is hang around.'...

In pursuit of a right little tosser

Nicholas Fleming THE HEART OF DANGER by Gerald Seymour HarperCollins, £14.99, pp. 397 I t would be difficult not to like Mary Braddock. She sounds a pretty good egg. She helps...

Francis King SMALL g: A SUMMER IDYLL by Patricia Highsmith Bloomsbury, £14.99, pp. 264 T his posthumously published novel is a departure for Highsmith, the blurb tells us....

Charles FitzRoy A NEW GRAND TOUR by Godfrey Hodgson Viking, £16, pp. 321 I f you are in any doubt where to spend your next long weekend, Godfrey Hodg- son's excellent New Grand...

Fiona Maddocks THE ORCHESTRA by Danny Danziger HarperCollins, £16.99, pp. 213 I t puts you in mind of coarse fishing, for the effect of reading this dispiriting volume is like...

The man behind the beard

Architecture The judgment of Cardiff Laurence Marks assesses the rules for great architectural competitions A the climax of the most famous shoot-out in British architectural...

Spanish Still Life from Velazquez to Goya (National Gallery till 21 May) Specialist concern Giles Auty H ere is an exhibition of outstanding quality which so far seems to...

Out of Mind, Out of Sight: Attitudes to Mental Health in Scotland 1790 – 1995 (Kelvingrove Art Gallery, Glasgow, till 3 September) Asylum art Alexandra Artley C T his way for...

True to death Nigella Lawson t seems hard to watch a film of a mercy killing of a terminally ill man and then review it as television. Is a disquisition of camera angles...

Loyalty of the Kennedys Taki Gstaad Jean Kennedy Smith, the American Ambassador to Dublin, is the younger sis- ter of the slain US president, J.F.K., and mother of William...

Brief remand Jeffrey Bernard F ace to face with that awful essay at the beginning of every term at school, 'What I Did In The Holidays,' my mind felt as numb as it is at this...

Upstairs downstairs Nigel Nicolson T he comfortably off should not regard with envy former years when a troop of ser- vants ministered to all their needs. It must have been...

Instead of Holly Budd H olly Budd was ill this week but The Spectator was sent the following by Nigel and Debbie, her deputy and her secretary. We hope that Holly will feel...

General Zia Andrew Robson THE TRUE bridge expert, combines tech- nical knowledge with an ability to manipu- late his opponents to his advantage. Here is the brilliant and...

Is it worth it? Auberon Waugh E very time I approach this task nowa- days, I am appalled anew at the prices. All the joy has gone out of offering wines when a village Chablis...

Gog and Magog Raymond Keene OVER THE PAST YEAR Gata Kamsky has shredded a series of match opponents, including Kramnik, Salov and our own Nigel Short. The only grandmaster to...

Malvedos 1979 Vintage Port for the first correct solution opened on 3 April, with two runners-up prizes of £15 (or, for UK solvers, the latest edition of The Chambers Dictionary...

A generous spirit Frank Keating THE DEATH at 84 of Richard Baerlein means that only the distinguished heavy- weight correspondent of boxing and athlet- ics, John Rodda,...

Dear Mary. . Q. Every day, on the school run, I have to pass the bungalow of a local tradesman. There I see an ongoing sequence of grandiose 'improvements' being made no doubt...