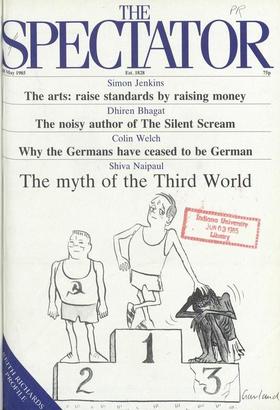 F ire consumed the south stand at Brad- ford City football ground in less than five minutes while a match against Lincoln was being played. Fifty people died at once; 170 were...

ONLY a deeply religious people, it could be argued, would want to kill the Pope 'because he opposed homosexual marriage and the ordination of women. But the pictures of the...

THE Swedish government recently consi- dered the treatment of homosexuals, speci- fically, whether they should be allowed to marry. The views of the Church were solicited: the...

SAVE LIFE AND THE BILL M r Enoch Powell has not yet aban- doned hope that the Government will provide the extra parliamentary time needed for his Unborn Children (Protec- tion)...

The Centre Forwards who refuse to kick off CHARLES MOORE 0 n come the Conservative Centre Forwards. Rather subdued applause from the crowd, but they certainly look as if they...

PEREGRINE WORSTHORNE T he menace of heavy drinking seems to bedevil Britain's security services. This cannot be for lack of trying to grapple with it, since official pressure to...

Kerb-crawling: a useful day's work in the House of Commons AUBERON WAU GH I suppose it is only to be expected that as evidence of normal heterosexual activity in these islands...

`the Third World' and finds that there is no such place WE DO not see people as they are any more. Instead, we see — or learn to believe that we see — those ghostly entities we...

THE NOT SO SILENT SCREAM

Dhiren Bhagat meets the man who sold abortion to America and now opposes it Rome THE doctor behind the thick lenses and the business suit comes on slow and ponderous, pausing...

PAYING FOR A STRONG AMERICA

Christopher Hitchens reports the first major defeat to be inflicted on Reagan's defence budget Washington IT'S BEEN quite a while since any presi- dent had the luxury of...

WHAT CRISIS IN THE ARTS?

Simon Jenkins urges an alternative to the present system of public subsidy IGNORE the letters to the Times. Forget the subsidised graffiti on GLC walls. There is no crisis in...

TUTOR TO THE NOBILITY

Anthony Stille on trying to teach English to an English lady THE aristocracy moves in a mysterious way. I became the private tutor to Lady M's daughter after meeting a shifty...

POISONOUS AS A RATTLESNAKE

Survivors: A profile of Keith Richards, musical genius of the Rolling Stones ONCE, when Keith Richards was still resident in London, he ' bought at vast expense an authentic...

A.M.Daniels wonders why people live longer when doctors go on strike IN GENERAL I try not to kill my pa- tients, whatever their moral failings or my personal inclinations. And...

Sir: Your regular sniping at the Guardian's Moscow man, Martin Walker, reflects no credit on your judgment or sense of fair- ness. Unlike other correspondents, Mr Walker does...

Sir: Your critics (Letters, 4 May) are not young fogeys; they are old poops. But I think the vertical lines should go. They clutter the look of the columns. The right-leaning...

Sir: Since, contrary to all rules of correct journalistic conduct accepted outside the High Court, your contributor Taki has cited me by name as a source in his column from New...

Sir: Colin Welch's remarks on punishment (Centrepiece, 4 May) recall a cartoon in the Spectator many years ago: Convicted prisoner: 'Your Honour, spare me. I am merely a product...

Sir: Your reviewer, Alexander Chancellor, hardly does justice to Baron Reuter (Books, 11 May). He writes, `In April 1863, Reuters brought news to London of the assassination of...

Paul Johnson is abroad, Christopher Fildes is on holiday.

The laird of Twitts Ghyll

Francis King Crusoe's Daughter Jane Gardam (Hamish Hamilton £8.95) nn the surface this is a chronicle novel V about a girl, Polly Flint, who is orphaned at the age of six and...

You wear your badges with such pride and I Admire you unreservedly. I share Your consternation and concern. I care About the principles you're standing by, The causes you uphold...

Paul Johnson Henry Lamb: the Artist and his Friends Keith Clements (Redcliffe Press, Bristol £16.50) E nglish painting, so vigorous and self- confident from the foundation of...

Andrew Gimson Utopia on Trial: Vision and Reality in Planned Housing Alice Coleman (Hilary Shipman £16, £7.95) W hen Alice Coleman made a survey of the entrances to the 1,782...

My voice has lost its Frank Sinatra feeling My trumpet imitations now sound flat, I have no moral feelings about stealing I eat and drink less yet I still grow fat. The love I...

Earthbound Peter Ackroyd Starman ('PG', Leicester Square Theatre) T he director here, John Carpenter, has been responsible for some particularly good films — among them, if...

Dubliners David Ekserdjian Masterpieces from the National Gallery of Ireland (National Gallery till 27 May) Ei very time a museum lends a work of Lart, a member of the...

Triumph of technique Peter Phillips T wo recent recordings of music by J. S. Bach have come to the top of the pile, both quite typical of the tercentenary view of this...

Meretricious Christopher Edwards As You Like It (Stratford) vriends who are able to obtain tickets IL for a successful production only after a wait of several months, often...

Decisions Ursula Buchan - 1 - would make a hopeless politician. I 1.have not that ability to make up my mind instantly on every subject, so I admire the confidence which can...

The news of the week, as to our relations with Russia, have been usually favourable; but on Friday there was , supposed to be a turn. Early in the week, Mr Gladstone in the...

Rights and wrongs Alexander Chancellor A rather disconcerting report appeared in the Times on Monday. It read: 'Yorkshire Television and Independent Television News sent telex...

Out for the count Taki T thought it about time that Jeff Bernard lgot the Writer of the Year award. Although a commie-pinko, he's one hell of a writer. In fact, he's the only...

Twin pools Jeffrey Bernard I met a very nice woman the other day who told me, 'I would like to drown in your eyes.' I'm not quite sure what that means but it is, I'm sure,...

Coming clean Alice Thomas Ellis J anet says that whereas when most peo- ple use the royal 'we' they mean 'I', when I use it I mean her — as in 'Janet, we must do the spring...

VE thoughts P.J. Kavanagh (In the radio some public figures were V asked how they began their day. Most of them confessed it was with the newspap- ers and/or the BBC Today...

Jaspistos reports: Competitors were asked to provide a plausible passage of prose containing twelve given words (each har- bouring the consecutive letters one) which might bear...

Swindle! David Spanier A 11 chess players at the top are a little mad, or if that is too strong, at least a touch unbalanced. The reason is not hard to find. The world bounded...

No. 1372: US on us Set by Jaspistos: Competitors are invited to write a poem about any aspect of contem- porary Britain in the style of Ogden Nash (maximum 16 lines). Entries...

Solution to Crossword 705: What's up

column was to provide an information service. Furthermore, I assumed that it's generally more helpful to be told of affordable places. Maybe this is wrong. Just as about 99 per...

Wine Club Auberon Waugh 'Those punters who, like me, invested I heavily in the 1982 Château Pichon Longueville Baron offer nearly two years ago will be relieved to have heard...