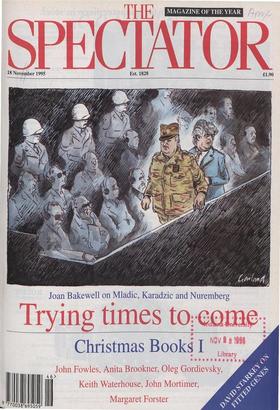 And anyway you know, I got hooked on the media. I tried to give it up only he wouldn't give up this other woman . . T he Queen announced in Parliament a series of Bills that...

There is only one thing wrong with the Tory Right; they are disgusting MATTHEW PARRIS I n politics as in Gadara, there is a powerful case for getting demons out of your...

PEREGRINE WORSTHORNE A Garrick club member, purple with rage, approached me at the bar last week and said, loudly and repeatedly, 'Sir, you are a shit, an incorrigible shit.' I...

If they don't recognise you in Whitechapel, you're not famous PETRONELLA WYATT H erewith a cautionary tale. The Amer- ican actor, Mr Mickey Rourke, was in Lon- don a few days...

IN THE SHADOW OF NUREMBERG

Fifty years on, Joan Bakewell rebuts the conventional view that the Nuremberg Trials were merely victors' justice THE TRIAL merits no more than a line in my guide book....

IT IS my business to know things other people do not know, as Sherlock Holmes said. Even so, I had no intention of ever mentioning Can You Forgive Her? again until a Mycroftian...

Kevin Myers accounts for Sunday's southern Irish Remembrance Day Service; but for some the poppy is orange FIFTY YEARS ago last May, a death notice of Brigadier W.A. Shiel DSO...

'TIS IN OURSELVES THAT WE ARE HEIERO OR HOMO

David Starkey, as both a homosexual and a Conservative, says that jeans tell us more about our sexuality than genes `DO YOU know the name of the gay gene?' the joke runs. Back...

SIGNS THAT our native red squirrel is multiplying (as indicated in last week's notes) should be correlated with its past history. Just fifty years ago the species suffered from...

AN IMPECCABLE HOST AND GUEST'

David Rennie explains why Kensington and Chelsea chose Sir Nicholas Scott; because there are still some Tories who hate right-wingery IT WAS the Sun, it seems, wot won it. Do...

THE COURSE of true love never did run smooth, but the going has been espe- cially rough round here of late. Some- times I wonder whether it is all worth it — sex, I mean — and...

THE NEED TO STOP LISTENING

Lionel Bloch denies that the French state should have had to listen to the Algerian bomber it shot dead KHALED KELKAL was a young Algerian involved in the recent bombing...

THE CHANCELLOR MAKES HIS MARK

Helmut Kohl will reject monetary union, Andrew Gimson believes, because he does not want to be the one to ditch the deutschmark Berlin BISMARCK SAID he 'always found the word...

Painting God's image in the human face PAUL JOHNSON P ortraiture is the most humane and fasci- nating of all the arts. In fact if I had my time again I would become a...

Look at that big hand nearing high noon it's time to check up on the script CHRISTOPHER FILDES A gnomic prophecy reaches me from the Sybil of Wall Street: 'President driven by...

Sir: Nigel Spivey in his review of Christo- pher Hitchens'

attack on Mother Teresa makes an important point (like Hitchens) about the misleading propaganda of the Missionaries of Charity. But he ruins his case by apparently believing...

Sir: The publication of the letters in The Spectator (11 November) rejoicing in the return of Alan Clark as Spectator diarist the previous week imply approval of Mr Clark's...

Sir: The Spectator seems a strange setting for the superficial article written by David Ren- nie (`The Tory lurch to the centre', 11 November) — perhaps it was intended for the...

Sir: Nigel Spivey wrote a searching review on Christopher Hitchens' book on Mother Teresa (Books, 11 November). Mother Teresa might be quite wrong on some issues, such as the...

Sir: I am a self-confessed barrister, a self- confessed jogger

Sir: Dangerous Donald and I were aston- ished by Alan

Clark's description of Dominic Lawson (Diary, 4 November). Anyone who looks like a demented chicken should avoid criticising the appearance of dashing younger men. Carole...

Sir: In an article dealing with homosexuali- ty (Books, 4 November), Mr Anthony Blond states that France accords equal rights to concubines as to married couples. True, but what...

Sir: Frank Johnson writing in his first edito- rial (4 November) does a disservice to Mr Blair and the idea of compulsory savings by suggesting they 'amount to' nothing more...

Sir: Apropos dreaded phrases (Diary, 4 November) I remember hearing that Sir Kingsley Amis thought the most depressing to be 'Shall we go straight in to dinner?' Nicholas...

Sir: I was pleased to be reminded by Mr Alan

Clark of Sir Kingsley Amis saying that the waiter's seemingly innocent question 'Red or white, sir?' — introduced a feeling of impending boredom and horror. Such questions and...

A currency of your choice

Sir: Mr Samuel Brittan (Books, 4 Novem- ber) writes a book review to express his case for a single European currency, but a European monetary system need not be a monopolistic...

Sir: In your issue of 4 November you print a letter from an Australian reader complain- ing about 'culture' or something. You have headed this letter Tommie arrogance'. This...

Sir: Mr Clark's remarks about the last editor were nothing

short of disgusting. It is not wrong to offend; but to offend pointlessly, in that witless, vulgar fashion, is childish and nasty. Theodore Dalrymple cio The Spectator, 56...

Sir: Michael Kimins (Letters, 4 November) writes to refute my contention (Arts, 14 October) that music is intrinsically power- less to express anything at all, forwarding his...

All right for columnists

Sir: Celebrating the end of fixed prices for books, Simon Jenkins is guilty of uncharac- teristically muddled thinking (Centre point, 11 November). The case against a price...

Sir: Michael Prowse began his review (Books, 28 October) by saying that 'Francis Fukuyama is best known for claiming that the collapse of the Berlin Wall marked "the end of...

One right, one not

Sir: Your issue of 4 November contains two pieces on family law. The first, by Ruth Deech, 'Divorced from reality', is a thoughtful contribution, as one would expect from a...

War reporting can activate the viewer but it can also titillate his appetite for grief pornography SIMON JENKINS The reply from one of the BBC's myriad executives was...

Books of the Year The best and most overrated books of the year, chosen by some of The Spectator's regular contributors John Fowles I'm currently enjoying Albert Camus'...

William Trevor LEWIS CARROLL by Morton N. Cohen Macmillan, £25, pp. 562 I t is one of literature's most treasured tit- bits that Alice's underground adventures were originally...

In quest of the mirage of the small platoon

Samuel Brittan ACCOUNTABLE TO NONE: THE TORY NATIONALISATION OF BRITAIN by Simon Jenkins Hamish Hamilton, 16.99, pp. 304 A lthough the state spends in one way or another two...

They were giants then

At the Plumbers' Arms

Above pub trestles, that plaque on the wall's re. Master Builder Thomas Cubitt's re- development toward Victoria — all leased from Lord Grosvenor, Mr Big, pre- Great-Reform-Bill...

Fear the geeks even when they bring gifts

Tobias Jones MICROSERFS by Douglas Coupland Flamingo, £9.99, pp. 371 T he man who once branded his genera- tion with an impersonal X has now reduced literature to mere...

She does not give herself, she gives lectures

Barbara Trapido WRITING AND BEING by Nadine Gordimer Harvard, £11.95, pp. 145 F or more than 40 years Nadine Gordimer, in her fictions, has documented South Africa's dark age...

The wheel is come full circle

Jonathan Cecil A KNIGHT ERRANT by Robert Stephens Hodder, £16.99, pp. 224 R obert Stephens was a rip, a repro- bate, a rapscallion; a hell-raising actor in the mode of Edmund...

The sweet youth of `Bird'

Duncan Fallowell TOM: THE UNKNOWN TENNESSEE WILLIAMS by Lyle Leverich Hodder, £25, pp. 644 T ennessee Williams became successful at the age of 34 with the triumph of The Glass...

He spied with his little eye?

Alan Coren THE GOSSIPS by Teresa Waugh Sinclair-Stevenson, £12.99, pp. 213 T here is, in West London, a rude rhom- boid boundaried in the north by Holland Park Avenue, in the...

Finding rubies by the Indian Ganges side

William Dalrymple THE HEART OF INDIA by Mark Tully Viking, £16, pp. 239 G etting mistaken for Mark Tully is one of the occupational hazards of being a foreign correspondent in...

Dance The state of the Lake Giannandrea Poesio A ithony Dowell's production of Swan Lake for the Royal Ballet, which had its premiere in 1987, is still causing discontent...

Wexford Festival Disarming charm Rupert Christiansen I had never been to the Wexford Festival before, and even the travellers' tales hadn't quite prepared me for its charm....

A profound disquiet Richard Osborne I t was an extraordinary programme. Before the interval we were promised Richard Strauss's Don Quixote; after it, Beethoven's Fourth Piano...

Best of British Robin Holloway Fairest Isle, Radio Three's hand- some 'celebration of British music and cul- ture', moves into its last lap to coincide with the actual...

The Scarlet Letter (15, selected cinemas) A for Adulterated Mark Steyn T he scarlet letter in question is a big A for Adultery which the unbending puritans of colonial...

Keeping abreast Ian Hislop I t must have been an odd week for the Writer Andrew Davies. There he was bask- mg in praise for his adaptation of Pride and Prejudice when the...

Street walking Gavin Stamp B uses are cheap; bicycling is even cheaper but the most economical form of transport (ignoring the cost of shoe repairs) is, of course, walking....

Racing parties Robin Oakley T he Big Three bookmakers all make Labour odds-on favourites to win the next election. But what would it mean for racing if they do? The Tories...

Social advances Taki aeldng a language whose inflections can suggest precise points on the social spectrum and their attendant values, Noo Yawkers have always relied on...

Top people Jeffrey Bernard E ver since watching last week's episode of The Final Cut, I have been wishing so much that Francis Urquhart really was the Prime Minister. He, or...

BRIDGE Expert work Andrew Robson ONE of the trademarks of the expert is his ability to make eights and nines work to his advantage. One such technique is the 'ultra-finesse',...

EACH TIME I go to France I eat a little

worse. It's in the last five years that the decline has become alarmingly pro- nounced. I don't include here so much the grand establishments, the places one plans to go to with...

i RA COMPETITION Buddhist blurb Jaspistos IN COMPETITION NO. 1907 you were invited to supply a jacket 'blurb' for a book entitled Combining Buddhism with Work Performance in...

Short circuit Raymond Keene LAST WEEK I REPORTED on the exceptionally strong tournament at Horgen in Switzerland, sponsored by Credit Suisse, which saw a great triumph for...

1236: Give me a ring by Doc A first prize of £25 and a bottle of Graham's Late Bottled Vintage 1989 Port for the first correct solution opened on 4 December, with two...

Discipline and magic Simon Barnes I HEARD the news that Mr Joao Have- lange had visited Nigeria last week without any great sense of shock. Well, what else would the Nigerians...

Dear Mary.. . Q. I have a small godson, Angus, whom I adore and whose birthday parties I always help to organise as his mother and I are very close. What I would like to know...