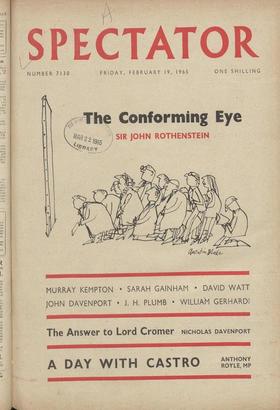 The Mouse That Roared

TT hardly needed Lord Russell's dis- 'appointed outburst against the Govern- ment to bring up the question of left-wing discontent this week. Even before his sweep- ing...

ALTHOUGH HE COMPLAINED that Tory MPs were 'disgusting to look at' during debates, because Many of them were 'half-drunk,' Labour back- bencher Mr. Duffy was not barred from...

DAVID WATT writes from Washington: If the United States has taken a step at last on a road hitherto barred by almost sacred inter- dict to a ground war on the Asian mainland,...

Warbey's Wanderings O N January 4, Mr. William Warbey, Labour MP for Ashfield, and his wife arrived in Hanoi, the capital of North Vietnam, where they were greeted at Gia-lam...

LEO BARON writes from Bulawayo : The forthcoming visit to Rhodesia of Mr. Bottomley and Lord Gardiner is good news in- deed. Britain has refused to allow petty considera- tions...

DR. MEYRICK EMRYS-ROBERTS writes: Superficially, the doctors' dispute might seem to be merely a struggle for status and a haggling over terms of service, but deeper...

The Steel Rebellion By ALAN WATKINS Elm years and years the nationalisation of r iron and steel has occupied a very special corner in every good Labour man's mind. As an issue...

Next week's 'Spectator' will include a number of special articles on France under General de Gaulle. The French Ambassador in London will contribute an examination of...

Mr. 4. E. Housman comments on the most modern dairying processes. Could milk be kept for ever In cartons scaled with wax, Lief would I feed the Indians And lief supply the...

Mock Sun By CHRISTOPHER BOOKER HIS week was reappraisal time for Fleet I Street's most curious disappointment of the past six months. 'Tomorrow night,' declared the Sunday...

If the half-million pounds recently spent on a painting by

Cezanne had been spent with discernment a few decades ago, they would have made Great Britain the possessor of a superlative collection of the modern masters, instead— among the...

to provide for sufficient pressure to pass the gas over

exceptional distances, and altitudes of up to 1,750 ft. above sea level. Despite these conditions, the first 180 miles of the North Wales grid, from Llangollen across the Menai...

The setting may be romantic, but the North Wales grid

is a highly advanced and sophisticated technological achievement. Built to operate over long distances and at high pressures, it was the first major gas grid in Britain to use...

T HE NEED WAS THERE, the demand was there. The difficulty

lay in the terrain. Rugged and romantic to the tourist, it pre- sented a tough, practical challenge to the architects of the'N. Wales grid. To supply the growing demand for High...

in the failure to secure a full bourgeois revolu- tion

in the seventeenth century, which has led to our economic growth having to struggle with a social structure that has often been inimical to it. And, of course, this social...

ALTHOUGH historians may argue until the end ■ , , )1 time

as to where the Neolithic Revolu- t ion started, we know that the Industrial Revolu- ti on 'took off' in Britain in the late eighteenth Cent ury; forged ahead for the best part...

The interim statement from Hoover did nothing to encourage an increase in the total dividend for 1964. This is raised 5 points by a final payment of 45 per cent making a total...