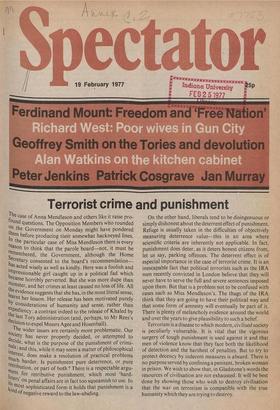 The case of Anna Mendleson and others like it raise profound questions. The Opposition Members who rounded dri the Government on Monday might have pondered t hem before...

On Monday the country was shaken by the news that the Foreign Secretary, Mr Anthony Crosland, had suffered a stroke at the age of fifty-eight. Infrequent bulletins over the...

Social democrat, vintage1940 John Grigg I cirtY Crosland's stroke is much more than a Personal tragedy. Brilliant politicians are now in short supply, but he is undoubtedly nne...

The appalling news of Anthony Crosland's sudden and by all reports calamitous illness left his friends thunderstruck, not for the raisons d' etat which naturally sprang at once...

Doctor Who? Auberon Waugh From time to time, like many people of my class, I find myself tempted to the view that British workmen might be slightly less—ah — competitive than...

R ichard West Johannesburg When pictures appeared in the papers last year of 'Gun City' and such establishments in Johannesburg where ladies and other civilians were taught to...

David Levy Moscow If you want to know the limits of free speech in the Soviet Union, the place to go to is the Taganka theatre in Moscow. The Taganka has long been the cradle...

The Conservative commitment to devolution

Geoffrey Smith There is one particularly curious feature in the Conservative confusion over devolution : how lightly the party's commitment to the Principle of a Scottish...

Freedom and the 'Free Nation'

Ferdinand Mount If I were choosing a spokesman for liberty, John Gouriet would not, I think, be quite mY first choice. He may in truth be the heir of Locke and Jefferson. He may...

Patrick Cosgrave Or eras- s , brutal, and even vicious insensiIlv tIY: for cruel evasiveness and cold dis, re ,, gar d for suffering and the emotions that attend suffering,...

An exercise in conservation

Christopher Booker Last week I wrote about the campaign to save Mentmore Towers, and began to ruminate on some of the deeper questions raised by 'the great mania for...

Pith and win Jeffrey Bernard Bird's Nest begins to look better and better for the Champion Hurdle at Cheltenham next month. He coasted in on the bit in his trial at...

No bull market yet Nicholas Davenport It has been my constant cry to investors not to regard the recovery in equity shares as the start of a new bull market until there is a...

e cilleague, Tim Raison, concludes that the solutio n lies with Members of Parliament th emselves. But will they so act ? Not I fear ever- increasing power of the Executive...

is s 'Wo quotations in your 5 February ue are 'enerai reassuringly complementary. oe Monck: 'The poorer and meaner h.. °13 `e have no interest in the common weal the use of...

Late in the day

Sir: All this reporting of Lady Falkender's important role in the Wilson cabinets makes interesting reading. But why has the press taken so many years to get round to doing...

Sir: I have just read, rather late, my friend Mr Hope-Wallace's charming account of the late Yvonne Prin temps (29 January). In other reports of her death I looked in vain for...

Sir: It is good to see Mary Kenny (12 February) standing up against the mindless aspects of trendy Permissiveness. But she had better be warned. There is still a lot of it...

is disconerambulatolial balderdash. The sum total of all premarital sex, fornication, adultery, incest, VD; abortions, and other forms of vice is an absolute constant. All that...

Sir: Thank you for publishing Mary Kenny's appreciation of, and plea for, the BBC's Radio 4 programme to continue in its present form. Is there no way in which pressure may be...

Sir: That it is no part of a passenger's business to be cognisant of whither the trains are going has long been part of the mystique of railway travel which experienced...

Sir: Mr Geoffrey Wheatcroft must surely be wrong in saying (Notebook, 12 February) that Lord Wigg's Memoirs were emended because of the harsh things that he had said about Mrs...

Sir: Fie, Mr Waugh. The indirect reporting of the activities of the actress Susan George (12 February) caused me to wince at the use of the American vulgarism 'ass,' when tile...

replies to my letter of the previous week w i g continues the attack on W. H. Smith Lw' I found it uninformed and, in parts, rattle r strange (e.g. his pretentious phrase ah°...

Peter Jenkins The Delusion of Incomes Policy Samuel Brittan and Peter Lilley (Temple Smith 23.00) Pay is back in the news. Mr Enoch Powell, no doubt, soon will be telling us...

The tapes at play

Douglas Johnson Peasants into Frenchmen. The Modernisation of Rural French: 1870-1914, Eugen Weber (Chatto and Windus £12.00) In Britain we have never understood what a peasant...

Francis King The Cleveland Street Affair Levv,i5 Chester, David Leitch and 00" Simpson (Weidenfeld and Nicols on £5.95) So much has been published recently an e l)( the...

Antony Lopez Who was Kit Marlowe? Della Hilt° n (Weidenfeld and Nicolson £5.00) 'Drama belongs to the people and Kit Mar' lowe was one of the people.' It's difficult t° argue...

Edward Jones Reside me in the stalls of the Hammersmith ?clean last week were two young Scotsmen, Doth extremely genial and very evidently the w orse (or better) for...

John McEwen Dieter Roth and Richard Hamilton's (Rotham) collaborative paintings of surrealist fantasies (ICA till 29 March) have already been much publicised because some...

Sunstroke Rodney Milnes lain Hamilton writes and talks about his work with enthusiasm and common sense. His Catiline Conspiracy, mounted by Scottish Opera three years ago,...

Pot shots Ted Whitehead The Frontiers of Farce (Criterion) The Last Meeting of the Knights of the White Magnolia (Hampstead Theatre Club) A bad week for women, who are...

No defence Richard Ingrams Dennis Potter who was interviewed on BBC on Sunday gave up being a television critic a few weeks ago. I hoped he would say, when asked why, that he...