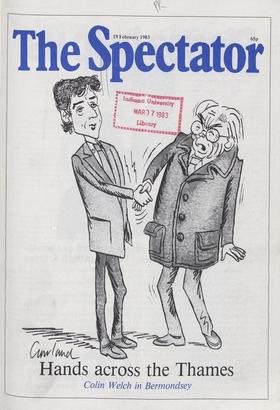 W ith a committee of inquiry taking evidence in public and ready to make a swift report, the way to end the water strike appears to have been found. The strike itself has not...

Tatchell v. 'real' Labour Colin Welch B ermondsey surely is a complicated by- election, with almost more candidates than voters; two of them called Hughes, one Liberal, one...

Vice-President George Bush has got a in- troduced memory. When I was n- troduced to him last week at the American Embassy he remembered that we had once Met before ten years...

Paradise regained Auberon Waugh A fter the Lord Chief Justice's revela- tions last week that the Sunday Times had completed invented a front-page story, in which it said that...

The Spectator Index for July-December 1982 will be available early next month (price £5).

Christopher Hitchens Against this set of comforting and self- serving deductions, consider the evidence of two Israelis, General Rafael Eitan and Jacob° Timerman. General Eitan...

Rites of a Beirut Spring

Alan Ross I n the early Sixties I spent a weekend in Beirut on my way to India. 1 remembered it as a city of solid Ottoman buildings, palm trees spraying shadows over...

Living at the Chelsea

Peter Ackroyd New York The fobby resembles some vast junk- ./ shop; the paintings are coated in a layer of dust, and portable sculptures have been placed in odd corners and then...

Brian Inglis 'W e are not petty people,' Yeats declaimed to the Irish Senate, when the Free State government began passing legislation he thought discriminatory against the...

A. N. Wilson T he restaurant at Church House is called the Vitello d'Oro: to remind us perhaps that the people of God were led astray into false worship while Moses col- lected...

Richard West In David Taylor described 'the typ- ing last week's article 'A graduate on the in g of CVs, the scouring of Guardian creative and media sections, and applica-...

Gavin Stamp A s a central Londoner without a car, I have a degree of sympathy for Mr Ken Livingstone and his Labour ad- ministration at the County Hall who, despite their...

Henry Porter L a fayette Ron Hubbard, the founder of the Church of Scientology, may or may not be dead. In answer to a petition brought by his estranged son Ronald DeWolf, a...

The French Senate has not rejected the Proscription Bill, but has accepted a substitute making it a Bill for the regular trial of Pretenders. The Judges on Fri- day, week...

Contempt: as you were Paul Johnson T he trial before the Lord Chief Justice and two other senior judges of the newspapers charged with contempt of court in reporting the...

There has been a disappointing response to my offer in the Notebook of bottles of English sherry. Where are the public com- panies who have given their directors no salary...

Sir: Jo Grimond (Notebook, 5 February) says that the Tate Gallery has long exceeded its optimum size. He should, then, protest against the Clore Gallery (Turner Museum and Tate...

Letters from the front

Sir: I am compiling an anthology of letters written home from battlefields since 19 00 . All letters will be treated with respect and returned. Annette Tapert 39 Moore Park...

Sir: Since Peregrine Worsthorne used most of last week's Notebook to castigate a newspaper article he found 'wholly misleading', it was odd that he should devote his closing...

Sir: Comment is free; facts are sacred. Ac- cording to my Bible the Fourth Command - ment requires the keeping of the seventh day as a Holy day. But perhaps Mr Waugh (12...

Sir: Mr Waugh is old enough now to be told

that not everyone numbers the command - ments in the same way that he does. He is obviously the victim of an over-sheltered Catholic upbringing. Catholics reckon the...

Sir: Mere words cannot adequately express my outrage at your cover dated 12 February. Contrary to your unsavoury sug- gestion, it is abundantly clear what this gallant Frenchman...

Sir: I am deeply honoured that Patrick Marnham should have woven his last Postscript column round me and my doings (12 February) but a little surprised that he should take such...

Miranda Seymour s ince Rabbit got his redux after ten years, it was always on the cards that Updike would do the same for Bech, the lecturer and one-time writer whose...

Apologies to the excellent Mr Bill Fraser for calling him

Bill Owen in my review of The School for Scandal. Mr Owen is about 5ft 8ins and weighs about 11 stone; Mr Fraser is 6ft tins and weighs 16 stone.

Time-honoured A.S. Henry omposers need their anniversary cele7 IL/ brations rather in the way that cricketers need the one benefit season which they are normally allowed in...

Tempestuous Peter Ackroyd Tempest ('15', selected cinemas) A first it looks as if it is going to be a storm in a tea-cup. A middle-aged architect, wearing a kimono, is...

Enduring Richard Ingrams Tonathan Stedall, producer of Time with J Beijeman (BBC2) a seven-part series which began on Sunday, has discovered what some of us have known all...

Gatherings Taki New York T ye had a marvellous week. The blizzard of '83 — as the television pundits kept referring to the snowstorm that had New Yorkers talking about real...

Jogging along Jeffrey Bernard w hen the lease of this body I live in ex- pires 1 hope to be buried in Canada. It was there, a few days ago, that a gravedigger was sacked for...

Musty halls Patrick Marnham rr hree readers writing recently in I response to chance remarks made in this column illustrate the difficulties that face the Spectator in its...

To enable competitors to economise on postage, entries for one or more weeks of the competition and crossword may be posted together under one cover addressed `Competition...

Jaspistos reports: Competitors were asked to describe the features of a very ill-run hotel or boarding-house which a guest should prepare himself for. A bow to Beachcomber...

No. 1257: Slanging the Bard Set by Jaspistos: You are invited to rewrite 16 lines of Shakespearian verse (please iden- tify the passage), preserving the metre and meaning but...

A prize of ten pounds will be awarded for the first correct solution opened on 7 March. Entries to: Crossword 595, The Spectator, 56 Doughty Street, London WC1N 2LL. 1 2 3...

Solution to 592: Potter's wheel The radial theme - words are synonyms

Wine Club Auberon Waugh r"N etermined as I am to keep the Spec- tator Wine Club as upmarket as possi- ble despite the murderous prices of good claret and burgundy, I have at...

T he dismembered remains of three men were discovered in the drain of a terrac- ed house in Muswell Hill, North London, by a plumber investigating a bad smell. Two severed heads...