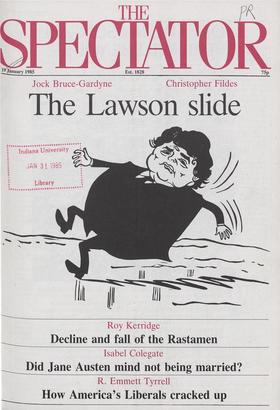 Portrait of the week he floating pound came at last

to 1 resemble an iceberg, with nine tenths of its value under the level of the dollar. It then collided with the Government's policy of masterly inactivity, which sank: two days...

Westminster market It doesn't, however, appear that the fluctuations and febrilities of Westminster insiders have much direct impact on public opinion — if they did, the...

/There is a whiff of Gotterdammerung in .1 the decision of the national executive committee of the National Union of Mine- workers to recommend to a dele g ate con- ference at...

T he cold weather has shown many Lon- doners the true nature of the borou g h councils to which the Government is so anxious to devolve more responsibilities: the councils'...

XTeil Kinnock can now be considered a 1 specialist on Central American affairs: he knows where Nicara g ua is. He also seems to know the difference between the 'Contadora' peace...

T he dull thing about January is having nothing to read, unless you happen to be planning an extremely mediocre holiday with a major tour operator. Magazines are little more...

Christopher Hitchens O n 10 March 1983, there was rather an affecting meeting at the Faculty Club of Harvard University. Present were Be- nigno Aquino, the leader of the...

R. Emmett Tyrrell W hen, while lounging in my New York flat, I received 'the call' from Charles Moore to appear in these vener- able pages, I half expected to be asked to take...

Correction A line, here italicised, was missing from the third

column of Christopher Hitchens's article about The Liberal Crack-Up, two 'potations running into each other: • • . Truth be known, however, it was the Liberals's war, foul-ups...

Richard Bassett 'There are some who, searching for the 1 atmosphere of the Habsburg Empire, feel irresistibly drawn towards Vienna, only later to be disappointed by the grey-...

is looking for a secretary for the Managing Director. Good typing and shorthand is essential. Please reply in writing enclosing c.v. and daytime telephone number to: Henrietta...

Gerda Cohen Xjahariya beach: hot beige grit and mi- ca, licked by the boring Mediterra- nean. Lebanon is a livid haze up the road. One can drive there in ten minutes, hear the...

Denis Hills Ngong/Karen A camper's life in East Africa is cheap (no rent). He is warmed by a mighty and reliable sun. He can potter about in shorts. He is not tempted to...

Roy Kerridge o you know any Rastas?' a friend wrote to ask me in a letter from America. The Caribbean diaspora had swept her from British Guiana to Harles- den, London, and...

Can we help Aids?

Andrew Brown T he story of the man who invented chess: the prince for whom he had invented the game was so delighted that he asked the counsellor to name his own reward. The...

A. M. Daniels T here is some alarm in the medical profession that the academic standards demanded by medical schools are now so high that only natural genius or, as is more...

Professor Freeman writes an interest- ing letter to the Times of yesterday on the subject of vivisection; but we cannot see our way to agree with him in asserting that even...

Leave the girl alone Jock Bruce-Gardyne D uring my 18 months' sentence in the grey Lubianka of Great George Street I never met the Treasury Model. But you didn't have to enjoy...

Labour waits for Godot Paul Johnson T alking to Arthur Scargill the other day, I was not surprised to find that he is getting ready to blame the approaching failure of his...

sad tale of Ni g el the captain and Robin the first mate. They were sittin g in their leaky boat, and poor Robin was g ettin g damper and damper, but Ni g el wouldn't let him...

Stealing sterling Manny is ri g ht: Don't care was made to 1 111 care. Sterlin g has a way of doin g that. On g overnments which affect to i g nore it, sterlin g forces its...

dealers of the City of Lon- don. One of them, watchin g the snow fall nearly as heavily as the pound, thou g ht to provide for the wood-burnin g stoves which heat his house. He...

W e started the year with £13,553 mil- lion of reserves, which is about £250 for everyone in the country, and some of us are tempted to reach for the money. After all, the...

Sir: As a Northamptonian born and bred, now dragging out my days in bitter exile among the snarling tradesmen, third-world boutiquiers and prancing poseurs of the Smoke, I must...

Sir: Mr Alan Watkins is undoubtedly one of the greatest journalists (with the possi- ble exceptions of yourself, Sir, and Mr St Loe Strachey) ever to write for the Specta- tor,...

Sir: I must be one of the 'paternalistic employers' — Ferdinand Mount in his re- view of Scargill and the Miners (Books, 5 January) — having been successively Secret- ary,...

How to stay on top .

Peter Black All For Love: A Study in Soap Opera Peter Buckman (Secker & Warburg £9.95) I t is to Peter Buckman's credit that he has -I-written a study of soap opera which...

John Jolliffe T his short book is of far wider interest than its specialised subject might sug- gest. The author was (thank God) British Ambassador in Washington at the time of...

The lies they write

Patrick Marnham Lies, Damned Lies and Some Exclusives Henry Porter (Chatto & Windus f9.95) A s I was about to review this book, my eye fell on a caption in the Daily Telegraph...

Sarah Bradford The Subversive Stitch: Embroidery and the Making of the Feminine Rozsika Parker (The Women's Press i14.95) T here was nothing subversive about stitching at my...

Americana Peter Ackroyd Repo Man (`18', selected cinemas) T his comes with the reputation of being a cult film, than which there is nothing more suspect. It also represents...

Ber-ber-boo Alexander Chancellor he most interesting revelation on tele- vision this week was provided by Mr Barry Norman in his programme about Bing Crosby (Hollywood...

Nightmare Jeffrey Bernard T have been dreaming a lot recently and lies really beginning to get me down both physically and mentally. But fear not, I wouldn't dream of boring...

Fire and water Alice Thomas Ellis T he Regius Professor of Greek and his wife, Mary, Professor in the Humani- ties, are coming to lunch, and the pipes have frozen. What's for...

Hostilities P. J. Kavanagh W e were let off lightly, as far as junior teenage parties go. Everybody had had a good time, no one had disgraced himself, or herself, and there...

Jaspistos reports: Competitors were asked for some improbable forecasts, in verse or prose, for the present year. Any prediction made by more than one of you — such as that the...

No. 1355: Sundowner Set by Jaspistos: You are invited to write a Kiplingesque poem (maximum 16 lines) on the decline of the British Empire since its and his heyday. Entries to...

Past glories Raymond Keene H astings is over, and, as so often in the past, a Soviet Grandmaster has taken top honours. Final scores were: Svesh- nikov (USSR) 9/13; Benjamin,...

Solution to Snatchy: A Christmas Jumbo (unclued lights are in

Spectator Wine Club Auberon Waugh F or our first offer of 1985 it is back to Rh6ne reds. Although one can find occasional bottles from other regions which are of an excitingly...