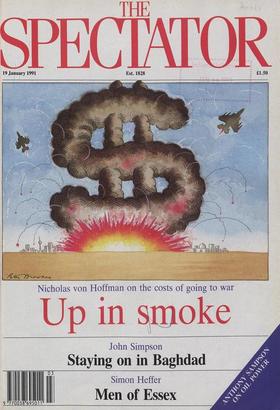 Dr Gorbachev and Comrade Stalin T he House of Commons voted, by a majority of 477, in effect for war against Saddam Hussein, with 57 MPs opposed to conflict and 31 abstentions....

The performing seals use their training to avoid debate NOEL MALCOLM I t is unthinkable that we could go to war without having a proper debate in Parliament first.' So said...

FREDERIC RAPHAEL T he proposition says some- thing" is identical with: It has a particular relation to reality, whatever this may be.' Who can fail to recognise Wittgenstein...

Unlikely to be quite such a field day for the punishment freaks AUBERON WAUGH B y the time this article appears I will be in Czechoslovakia on a short holiday, unless...

GOING UP IN SMOKE

American is debt-ridden as it goes to war. Nicholas von Hoffman on the price which may have to be paid — in dollars, lives and foreign policy Washington FROM August to...

IN LAST week's issue John Keegan, in an article entitled 'The instrument of catas- trophe', wrote that Julie Burchill opposed war in the Gulf when she appeared on an Any...

THE RELATIONSHIP UNDER FIRE

Nicholas Henderson on the Gulf crisis, Nato and Britain's commitment to Europe THE GULF crisis, whatever else it has done, has given a fillip to the relationship between the...

A DOG'S AFFECTION AND CRAFTINESS [TO THE EDITOR OF THE "SPECTATOR"' Sir: While living in the sunny and friendly little town of Adelaide, near Fort Beaufort, I had gained the...

John Simpson waits in Iraq for the bombs to start falling Baghdad THE cars carrying the British ambassador and his staff turned the corner and dis- appeared from sight,...

A reader received the following letter from her mortgage company: Dear Mrs Standen, Despite previous reminders your account is still overdrawn. There is a debit balance of...

Ruth Rees talks to exiled Kuwaitis who feel betrayed by the King of Jordan LAST week I was the only woman at one of the dewaniahs held every evening in London since Iraq...

Gerda Cohen is surprised by the Israelis' apparent lack of concern as war approaches Jerusalem `WHAT war mood? There is none.' Mr Kohavi, relentless talker and grumbler, was...

David Lovibond on the remnants of the Ascendancy Castletownshend, West Cork THE sun is setting behind Slieve Bloom mountain, and in the gloaming the whispering shades of...

SELF-ESTEEM. The cant is a cant of omission. A 'self-esteem problem' is used exclusively to mean a person's sense of worthlessness, and irrational rejection of his true worth....

Simon Helfer observes that the old and the new Essex are happy to rub along together WERE one bent on suicide, an efficient way to confirm the atrociousness of exist- ance...

THE religious sometimes ask what would happen if Christ were to return to earth. In this country, at least, the answer is clear: he would be placed under a section of the Mental...

The media: Paul Johnson discusses its role in the Gulf during and after a war UNDERSTANDABLE anxiety is felt by the British and American authorities about the likely behaviour...

ANOTHER splendid Hong Kong row, rumbling, for the most part, below the surface, involves the oldest and grandest of the trading houses, Jardine Matheson. Some years ago Jardine...

Up in the air

NOTHING could be more typical of Hong Kong, or of the state of play with the mainland government, than the great air- port row. Anyone who, swerving in to land at Kai Tak, has...

HONG KONG is the only financial centre where a run on a bank has been set off by a broken-down bus. The bus's passengers got out into pouring rain, and took shelter under the...

I WOULD be more afraid of what could be done with the arbitrary powers of the independent Commission Against Corrup- tion. This was set up to cope with police- men who thought...

Room at the top

ONE of Hong Kong's new hotels got off to a poor start — so poor, indeed, that the owners, shattered by disastrous figures, decided to call in consultants. Their advice was...

Sir: Whatever the limitations of Mr Gar- ston's imagination (Letters,

5 January) I read Candida Crewe's piece about chir- opody with great interest. I took an equal interest in Amanda Craig's article about the licensed abortionist, though I...

Sir: I, too, admired Amanda Craig's article on abortion. One wishes the ghastly ex- perience finished there. I work as a post- abortion counsellor and every week listen to...

Sir: 'Poor woman, poor potential human' (5 January) — these are the emotions we all feel about abortion, but how sad that the text following this title concentrated on the...

Sir: Chiropodists are no doubt fair game for your wittier contributors at all times of year, but in the season of goodwill Candida Crewe (`The sour smell of chiropody', 22/29...

Sir: In his article on the Gulf (`The instrument of catastrophe', 12 January), John Keegan draws comparison with the Normandy battle in 1944, but I wonder if he can get away...

issues for both the medical and the journalistic pro- fessions. Did she, for instance, seek the permission of the women whose abortions she so gloatingly observed? Surely...

Sir: When one writer attacks another writer's style, he is taking a risk, for he is implying that he himself is not only far superior on the page, but also that he should be...

Georgia not on his mind

Sir: In his review of Three Sisters (15 December) Christopher Edwards finds the production remarkably unChekhovian, ' particularly since the director, Robert Sturua, is 'the...

Sir: The Lithuanian Association of Great Britain supports the Republic of Lithuania in her struggle for democracy, freedom and independence. We need money and many other kinds...

Sir: I was not at Winchester but at a small (local authority) co-educational grammar school in the provinces, yet I too well remember the German songs we learned and sung. This...

Sir: I would have entered Jaspistos's com- petition (5 January) asking for parodies of Private Eye had you not prematurely pub- lished what I presume to be Frederic Raphael's...

Sir: Driving down the main street of Midvale, New Jersey, the other day I saw an arresting notice on a board outside the local school: 'In case of War, the ban on School Prayer...

Sir: Your diarist called Raphael referred to me (12 January) as a 'hired assassin called Bernard' because of an article I contri- buted to the Independent Magazine about the...

The victory went to champagne

The doubts of a master

Care? Of course I care! . . . Only less. Something less now. It's the same way, I would guess, with the trees, maple and oak (taking them year by year) losing their leaves. They...

Climb every mountain till you find your dream

Philip Glazebrook AT HOME IN THE HIMALAYAS by Christina Noble Collins, £15, pp. 210 F rom the opening pages of this book, which describe Miss Noble's first encoun- ter with the...

Christopher Lloyd SEURAT: A BIOGRAPHY by John Rewald Thames & Hudson, £45, pp. 240 J ohn Rewald can fairly be described as the founder of modern Impressionist stu- dies in so...

for Graham Davies A moving tableau, so to speak. On the same couch, week after week, Talking of absence, I can see Its likeness bearing down on me: The ceiling blankness. But...

Genuflection or the dirty joke

Not as Simple as all that

Charles Moore A DUBIOUS CODICIL by Michael Wharton Chatto & Windus, f15.99, pp. 261 T his is a poetical book. It deals with desire and madness and rural beauty and human...

Wavering on a ledge, Your life choked with bile, Never drop off the edge Enemies would smile! Benjamin Ivry

A Lord Cardigan for this century

Theatre 1 With eyes as big as saucers Beryl Bainbridge recalls life back- stage at the Liverpool Playhouse, now threatened with closure the Star Theatre, opened on 11...

Derain: the Late Work (Museum of Modern Art, Oxford, till 17 March) Oddly revered Giles Auty I have seen a great deal of painting which does not appeal to me at all. Its...

Capriccio (Covent Garden) Very stylish Rupert Christiansen T his will be a year of recession for opera as much as for anything else — a year in which a much-advertised boom...

Time flies Peter Phillips R oger Norrington's justification for taking Beethoven's Seventh Symphony rather faster than we might have been expecting on television the other day...

The Fool (`U', Curzon West End) Too many stitches in time Mark Amory A ccurate period detail is very depress- ing, which is a pity as it is something that the British are...

Going to seed Ursula Buchan A s predictable in timing and appear- ance as the travel brochure tempting us to ever more exotic holiday destinations (`This year, why not get...

Spoilt for choice Martyn Harris I have been watching American televi- sion all week, though I'm not sure if 'watching' is the right word. I witnessed it; it swept over me. I...

Too quiet for comfort Taki he ladies who lunch, those social X-rays made famous by Tom Wolfe in his Bonfire novel, have been awfully quiet since the start of the new year. If...

Blues night Zenga Longmore W henever there is a knock on the front door, Omalara launches into what has become her 'door ritual'. She will spin around three times like a...

Cottage loafer Jeffrey Bernard T his is a far cry from depressing West Hampstead and I thank God for it. I'm staying in a village called Stacey in Norfolk with a friend,...

Something of an annus mirabilis Auberon Waugh A t this time of year we need red wine which is full of taste and energy but not too expensive, as practically nobody has his...

A GOOD ten years since the first influx of the

Vietnamese boat people, it seems extraordinary that there is so little culinary trace of them in this country. In the Eighties, during which time over 10,000 Vietnamese came in...

Solution to 'A Christmas Jumbo'

Battles Raymond Keene T his year ' s Foreign and Colonial tournament at Hastings has undoubtedly been the finest of the series, with a huge crop of superb fighting games. Even...

Dirty dozen Jaspistos 12 YEAR OLD SCOTCH WHISKY I n Competition No. 1659 you were in- vited to incorporate the following words, in any order, into a plausible piece of prose:...

There is a stage direction in The Winter's Tale: 'Exit, pursued by a bear.' You are invited to supply (maximum 16 lines of verse or 150 words of prose) an extract from an...

CROSSWORD 992: Noteworthy, too by Jac

Ack-ack stopped play Frank Keating THE FRENCH have been fast to suggest it might be in bad taste to continue with the Five-Nations rugby championship if the guns start...