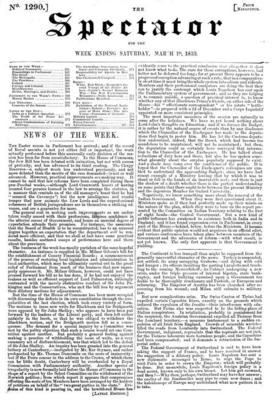 THE Easter recess in Parliament has arrived ; and if the record 'of Royal assents is not yet either full or important, the work actually performed before this unusually early...

The Continent is less tranquil than might be supposed from

the generally uneventful character of the news. Turkey is suspended, not settled; its army occupying Grahowe—and dying with cold and hunger ; its officers insulting the parting...

In the regions beyond sea, the intelligence, like that of

the Continent, discusses the progress of great movements rather than tells of startling achievements. The reverses sustained in Bur- mah,—by General Steele, driven 'back in the...

PRINCIPAL BUSINESS OF THE WEEK. HOUSE OF LORDS. Monday, March 14. Defects of Statutes; Speeches by Lord Lyndhurst and the other Law Lords—Mutiny Bills passed. Tuesday, March...

The Queen continues to take carriage exercise and visit the theatres. On Saturday, her Majesty and Prince Albert drove to Sydenham and inspected the works in progress at the New...

A large and influential deputation waited on the Earl of Aberdeen on Wednesday, to submit to him the claims of the London University to re- presentation in Parliament....

A meeting of "bankers, merchants, manufacturers, and others," to be held at Manchester next Tuesday, to consider the renewal of the Indian Charter, has been called by the Mayor,...

Judge Perrin has been assaulted by a criminal in the dock at Berry As- sizes. He had just sentenced Dennis Connor to a year's imprisonment for robbery ; the ruffian mounted a...

FRANCE. — Political news is stagnant just now in Paris. Neither do we hear much of the movements of the Emperor and Empress. They were at a flower-show on Saturday, and have...

Lord Stratford de Radcliffe had an audience of Louis Napoleon on Thursday, and was to leave Paris for Vienna yesterday. M. de la Cour, the accredited Ambassador from France to...

SATURDAY. The proceedings of the House of Commons in Committee on the Cana- dian Clergy Reserves Bill were marked by a considerable change in the position of the Government. A...

The French Legislative Body received the Budget yesterday from the

The announcement brought by the last South American mail, of

the death of Mr. Henry Southern, her Majesty's Minister at the Court of the Brazils, will cause a regretful pang to many. Mr. Southern first be- came known in the higher class...

TO THE EDITOR OP THE SPECTATOR.

8 New Burlington Street, 15th March 1853. Sin—May I request you will do me the favour to make known, in order to prevent any misconception on the subject, that I am not in any...

Mr. Webster's adieu on Monday was impressive and interesting. The parting manager sighed over past troubles, and was grateful for past favours ; and, what was of more...

The closing of the St. James's Theatre at the end

of the present week terminates a defined section of Mr. Mitchell's season. The period of broad farce is over, and the artival of Mademoiselle Brohan and M. Regnier after Easter...

&ram EXCHANGE. Paws: Arrirazoioa. The buoyancy in the English Funds, which was predominant at the close of last week, was maintained until Wednesday. Much steadiness had been...

The precautions which were taken by Ulysses to render himself impreg- nable against the fascinations of the Syrens, we strongly recommend to all English managers who may hear of...

CONCERTS OF THE SEASON.

THE TRUTH OF THE PEACE ASSURANCES.

ALL modern inventions tend to simplicity. The great practical philosopher who discovered the method of roasting a pig without burning a cottage for the purpose, has been...

s TOPICS OF THE DAY.

1 . k IA AS A CABINET QUESTION. Ir ifellegeli8114 to legislate on the subject of Indian Government this *don ; and the necessity is not only distinct on the face of the facts,...

RESPONSIBILITY FOR AGENTS IN BRIBERY.

THE fear of the agent grows upon the House of Commons. Every Member, if not troubled in conscience, is troubled in Committee, with the discovery that petitions against him may...

at the inquest on the persons killed by the accident on the Lancashire and Yorkshire Railway, although it discloses nothing new, imparts a new value to that which is already...

The penalties will be enforced ; the contract perhaps voided ; and the Company's books will tell a painful tale. To whom P—To the shareholders. Their neglect is a counterpart of...

But the Assistant Judge gives some further authority, and amongst ethers, his own "feelings "; for "he knew that in sen- tencing a man to transportation, he was giving him a...

WHITE BED BLACK. * Mn. in Mits. PULSZKY attended Kossuth through his American progress, and these volumes are the result of their observation ; Mrs. Pulszky presenting a...

THE principal feature of this volume is a winter beyond the Arctic circle, and a foot journey of some eleven hundred miles over land and frozen seas in the spring, which in that...

Tins volume exhibits war in its details as seen by the subaltern, and in its larger aspects as picked up by the same personage from the gossip and criticism of the camp, aided a...

THE NEW ENCYCLOP-EDIA. BRITANNICA. * THE test of more than eighty

years, the exhaustion of five-and- thirty thousand copies in seven impressions, and the demand for an eighth edition, speak more for this national publication than any criticism...

WELLY ARMSTRONG. * WHAT Lillo's George _Barnwell is to the drama,

Nelly Arm- strong is to fiction,—too narrowly natural in its leading incident to impress a general example, with too much of weakness in its princi- pal personage to properly...

Boom India as it May Be; an Outline of a proposed Government and Polley. By George Campbell, Author of "Modern India." Poems, Narrative and Lyrical. By Edwin Arnold, of...

EXHIBITION OF THE NATIONAL INSTITUTION. The National Institution gets worse and worse. Setting aside some pretty landscapes, interiors, and so on, it is becoming a show-room...

BROWNE'S ASCENT OF MONT BLArre.* This large paper-bound folio is

the work of Mr. J. D. H. Browne, one of the gentlemen who achieved last summer the most recent ascent of Mont Blanc. It is a curiosity, and an interesting one. The designs are...

We have had an opportunity of seeing, at the studio of the artist Mr. Lucy, a picture of Nelson in his cabin in the Victory on the morning of the battle of Trafalgar, which it...

The approaching Easter holydays will not surprise Mr. Burford unpre- pared or inactive. His Panorama Royal opened yesterday to private view with a picture of Granada, of the...

BLUTH OF LONDON DURING THE WEEK ENDING Kamen 12.

[From the Official Return.) Zyroodc Diseases of Dropsy, Cancer, and other diseases of uncertain or variable seat Tubercular Dise ases Diseases of the Brain, Spinal Marrow,...

The prints to be delivered to the Art-Union subscribers for the current year are taken from Mr. Selous's "Surrender of Calais," and Mr. Han- cock's bas-relief, "Christ led to...