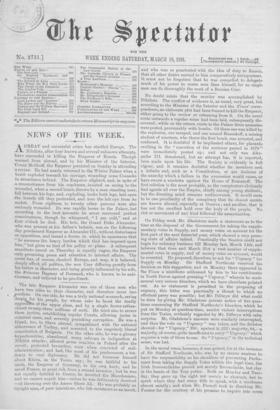 No doubt exists that the murder was accomplished by Nihilists.

The conflict of evidence is, as usual, very great, but according to the Minister of the Interior and the Times' corre- pondeuts, an elaborate plot had been framed to kill the...

On Friday week Mr. Gladstone made a statement as to

the time at the disposal of the Government for taking the supple- mentary votes in Supply, and money votes on account for the first part of the next financial year, which showed...

The late Emperor Alexander was one of those men who

Lave two sides to their character, and therefore incur two verdicts. On one side, he was a truly national monarch, caring deeply.„ .. for his people, for whose sake he faced the...

A GREAT and successful crime has startled Europe. The Nihilists, after four known and several unknown attempts, have succeeded in killing the Emperor of Russia. Though warned...

In the moral sense, however, it was gained, for at

the instance of Sir Stafford Northcote, who was by no means anxious to have the responsibility on his shoulders of preventing Parlia- ment from taking the Supply Votes within...

To this speech Sir W. Harcourt replied by congratulating Lord

Randolph on having proved the infinite divisibility of matter by the dissolution of the Fourth Party into its elements, and on giving his final kick in the spring to the very...

It is believed that the negotiations between Sir Evelyn Wood

and the Boers are about to terminate in a peace. Sir Evelyn informed the correspondents on Wednesday that the Boers had accepted almost all the British terms, but some points...

On Thursday, Mr. Gladstone, when questioned by Colonel Berne as

to whether it might not be well to strengthen the Standing Order against Obstructives in the same direction as Mr. Dillwyn has proposed to strengthen it,—that is, by suspending...

The negotiations at Constantinople may be profoundly affected by the

Russian catastrophe. At present, however, they halt. The Porte has informed the Ambassadors officially that it will cede Thessaly up to Mount Olympus, and some small terri- tory...

Mr. Gladstone on Wednesday brought forward the vote in aid

Financial credit was once supposed to be the attribute of

monarchies, but it is rapidly accreting to Republics. The Government of the United States now raises money at ai per cent., and the now three per cent. French Loan of...

An atrocious but clumsy attempt was made on Wednesday night

to blow up the Mansion House. At half-past eleven a policeman noticed smoke and fire proceeding from a box placed in a reeess in a window beneath the Egyptian Hall. He ran up,...

The third reading of the Peace Preservation Ireland Bill was

taken on Friday week, Mr. Parnell making a final protest against it, and Lord Randolph Churchill delivering what he- termed his final kick. He complimented Mr. Forster on his...

Mr. Gladstone announced on Monday that he was prepared to

carry out a small, but very convenient, reform. No one has ever understood why a penny postage-stamp, which everybody has, should not do for a penny receipt-stamp, which nobody...

The arrests in Ireland have not as yet, wo believe,

exceeded thirty, and have not touched any of the Parliamentary party. Archbishop M'Cabe has returned to the charge against the unlawful purposes of the Irish agitators, and in a...

Mr. Childers has been very fortunate. It is evident from

the debate of Thursday that he will pass his Military Estimates, and with them his reforms, without serious opposition. Colonel Stanley, though critical on details, did not...

In a speech at Northampton on Saturday, Mr. Bradlaugh declared

that he was quite willing to adopt the latter mode of procedure, and would do so, rather than allow the time of the House of Commons to be wasted, in the present urgent position...

Mr. Fawcett made an interesting statement on Thursday night as

The Liberals have lost the late Sir Henry Jackson's seat

at Coveltry, and lost it by a large majority. The election came off on Saturday, and there polled for Mr. Eaton (the Conserva- tive), 4,011; for Sir Ughtred Shuttleworth (the...

in relation to his right to make the affirmation in Parliament. The general ground of his decision was that the affirmation was only intended as a substitute for those who,...

At the annual dinner of the Benevolent Society of St.

Patrick, on St. Patrick's Day, Mr. Forster expressed his confidence in the prospects of Ireland, and attributed a good -deal of her present difficulties to those jealousies...

THE NEW CZAR. T HE noisy, and in some quarters unreal, outburst of horror which has followed the assassination of the Emperor Alexander, must not blind us to the immense...

I F Sir Stafford Northcote had as much interest as Mr. Gladstone has in restoring the Liberal majority in the House of Commons to its proper constitutional powers, he could...

AITE do not know that English Liberals need interest themselves very greatly about the approaching con- test in the French Chamber over the proposed alteration in the method of...

WHY WHIGS DO NOT TURN TORIES.

I N the Nineteenth Century for this month, Mr. Kebbel, one of the most experienced and able of Conservative journalists, writes an article which is intended to prove that the...

rr HE Bill brought in by Sir Gabriel Goldney and Mr. Thorold Rogers to repeal the Act which, under the engaging plea of removing doubts respecting the eligibility of persons in...

THE VOTE FOR THE AFGHAN WAR.

T T is a little unfortunate that Mr. Gladstone, in proposing the Vote for the Afghan War, felt it expedient to be so extremely conciliatory, for his suppression of all...

CARLYLE AS A PAINTER.

C ARLYLE will live in literature as a painter, rather than as a thinker. Of all our literary artists, lie is the greatest of the school,—of Rembrandt we were going to write,—but...

T HE Emperor of Germany, though not what is called an intellectual man, is a man of vast experience, and a cer- tain clearness of insight into the reality of things ; and the...

LORD LYTTON AND " IGNOTITS." [TO THE EDITOR OF THE SPECTATOR."] Slit,—In your last number, you were good enough to invite me to " do a public service, by explaining publicly...

THE BOERS AND THE NATIVES.

[TO TRH EDITOR OF TOR SPECTATOR.") Sin,— One of the troubled questions of the day is,—" Shall we, or shall we not, restore to the Boers of the Transvaal that iudepen- en ce of...

IRELAND AND SIR WILLIAM HARCOURT. (To TIM EDITOR OF THE

" SPECTATOR. "] ' ' Sra,—As an Irishman who takes an interest iu his country, I must write to thank you sincerely for your admirable article in last Saturday week ' s Spectator,...

(To THE EDITOR OF THE “SPEOTATOR.1 Silt, — The gratitude of all thinking men is certainly due to you, for your manful and unprejudiced endeavour to analyse the evil vapour which...

cm THE EDITOR OP THE "SPECTATOR."] Sui, — Mr. Gladstone's refusal to give any assurance that the .Irish Laud Bill should. be introduced before Easter is, I think, enuch to be...

THE CATHOLIC CHURCH IN FRANCE AND THE • ORGANIC ARTICLES.

[TO THE EDITOR OF THE " SPECTATOR.") am greatly obliged for the information conveyed in the note which you have appended to my letter, published in your issue of last week. But...

A TRUE 'AMBITION. (To THE EDITOR OF THE " SPECTATOR.")

Silt,--Will you allow me to bring before your notice the follow- ing case, which, I believe, only needs to be stated in order to- call forth the sympathy which it deserves...

THE ORNAMENTS RUBRIC IN THE LAW COURTS. [To THE EDITOR

OF THE " SPEOTATOR."] Slit,—Permit me, while expressing general agreement with the tone of your article on the forthcoming Royal Commission, to give some reasons for dissenting...

MEMOIRS OF METTERNICIL* THESE two volumes are not as interesting as the first two. We believe diplomatists of a certain age enjoy them, and say they .explain many things, but to...

attended the Czar's head-quarters during the war in Turkey, in one of the notes to his honest and careful history of the Russian cam- paigns, compares the siege of Plevna in...

RABAN, POET AND PROBATIONER.* IT is a fact to which,

as it seems to us, sufficient importance has not been attached, that the first Reformer in the early Christian Church—St. Stephen—the man to whom primarily she was in- debted...

by Mr. Jennings A pleasanter companion in summer-time than his Field Paths and Green Lanes it would be difficult to find, and the delightful country flavour of that volume is...

MR. ILLINGWORTH'S SERMONS.* Mass sermons have a rare intensity and

reality of tone, in which we find the echo of a .conviction deeper even than the language in which it is conveyed. As the very same bulk of the very same water exerts an...

THE PROFESSOR'S WIFE.* IT is difficult to say how far

stories written to illustrate the moral evil of particular practices answer their purpose. That this story, which is not without power, does draw an alarming and a not unjust...

' THERE is something to be said against the practice of setting par- ticular books as subjects for Classical examinations, or, indeed, for any examinations in language. Where,...

• Descartes ; his Life and Meditations. By Richard Lowndos.

(Frederic Norgate.)—Descartes' life, though quite that of a philosopher, is by no means devoid of interest for the general reader. His speculations on the whole tend to...

—This tale is described on the title-page as " a story of Lake-Lan- cashire ;" and there are some pictures of scenery and conversations in dialect which go some way towards...

Great Orators. By Henry James Nicoll. (Maeniven and Wallace.) —The "great orators" whose life and work Mr. Nicoll sketches for us in this volume are Burke, Fox, Sheridan, and...

Palmer. (Marcus Ward.)—We have already told our readers some- thing of the merits of this little volume, but may fitly record its literary value here also. Professor Palmer...

Three Fifteenth-Century Chronicles. Edited by James Gairdner. (Printed for the

Camden Society.)—The documents which Mr. Gairdner edits hero are,—firstly, "A Short English Chronicle," con- sisting of three parts, viz., an abridgment of "The Chronicle of the...

The Temple, or the Tomb. By Charles Warren. (Bentley and.

Son.) —In this volume, Mr. Warren arraigns the view, set forth by Mr. Ferguson, who finds the site of the Holy Sepulchre in that of the Temple of Solomon. Mr. Ferguson's theory...

Debrett's Peerage, Baronotage, Knightage, and Titles of Courtesy for 1681.

Edited by R. II. Moir, LL.D. (Dean and Son.) —The contents of this carefully-arranged and valuable reference-book have this year been amplified to the extent of 160 pages. Some...

New Colorado and the Santa Ed Trail. By A. A.

Hayes, Jun., M.A. (C. K. Paul and Co.)—This is a bright and pleasant book of travel. New Colorado is Colorado as it is to-day, for to-day iu the Wost is very different from...

Prize Translations: Poems and Parodies. (John Walker and Co.) —These

are "reprinted from the Journal of Education," and are the successful or commended pieces sent in for a series of prizes. The editor speaks of the difficulty which he has found...

Quintus Curtius. Edited for Schools and Colleges by W. E.

Holt- land and T. E. Raven. (Cambridge : Pitt Press Series.)—There is a good deal of caprice in tho selection of Latin and Greek classics fur our schools and colleges. Some very...

Farming for Pleasure and Profit. Vols. IV., V., and VI.

By A. Roland, (Chapman and Hall.)—Here are three further instalments of Mr. Roland's manual of agriculture. In those volumes he treats of stock-keeping and cattle-rearing ; of...