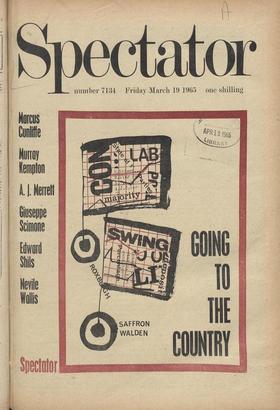 The Grip of Megalopolis

A swith unemployment between the wars, so with housing and education today. These are the great domestic political themes of the time: and they are confused by prejudice,...

Portrait of the Week A WE SHALL OVERCOME': the Civil Rights

hymn entered American history when President Johnson, in a dramatic speech to Congress, quoted it as lie urged the use of federal power to give voting rights to Negroes: His...

President Johnson's Challenge From MURRAY KEMPTON NEW YORK Mr. Johnson has been splendid enough this weekend to make those of us uneasy with his style wish that the whole...

JOHN HORGAN writes from Dublin : The summer of the seventeenth Dail is over. It ended, with surprising swiftness, with the Labour by-election victory in Cork last week, although...

RUGBY Not by Halves

JAMES TUCKER writes from Cardiff: Standing in the five-shilling enclosure for the Wales-Ireland triple-crown match at Cardiff Arms Park last Saturday, I felt a bit like Stephen...

General Franco bestowed on Cardinal Herrera, Bishop of Malaga, a red biretta and not a red hat, as stated on March 2.—Correction in The Times. It was reasonably reckoned On...

ci IRISTOPHER BOOKER writes : 'The war in Vietnam,' the Daily Express boldly declared last Friday, 'is a war in which Britain is vitally interested': which must qualify as the...

Going to the Country By ALAN WATKINS N October,' declared Mr. Michael Hamilton at th e village of Birchanger, 'England kept her head. If England had her own separate...

From DAVID WATT WASHINGTON A MONG the more alluring minor arguments occasionally used by American liberals to justify the proposition that the US should cut her overseas...

Curious how one's impressions of even the most familiar literature can suddenly be transformed in the light of contemporary events. A chance re- reading of Paradise Lost has...

Mr. E. T. Judge, the new President of the British Iron and Steel Federation, is predictably against the nationalisation of steel. So. equally predictably, am I. I applaud in...

Nevile Wallis reviews the new generation of sculptors at the Whitechapel Gallery with his customary insight on another page. Certainly it is a very jolly show which includes...

L AST week I wrote about Herbert Morrison. L./Re-reading what I wrote and comparing it With all the other tributes it is striking how often his brilliant political career was...

Semi-private Whether or not Mr. Khrushchev's sudden appearance before western

cameras was deliber- ately timed to stir up a jolly atmosphere for the Gromyko visit to London, it certainly had the right effect. But what is Mr. Gromyko doing here? A four-day...

Answer Cime There None

Faithful readers would not accuse me of being an uncritical admirer of the Prime Minister. All the same I can't help wondering what on earth has happened to the fellow. It has...

Savonarola Brown By A. 7. MERRETT H ow much of a reduction in the rate of in flation the Government expects from its incomes policy has not yet been made clear. Assessing this...

By GIUSEPPE SCIMONE N OT long ago the head of the Polytechnic of Milan, which incorporates the faculty of architecture, decided to suspend the lectures of the town planning...

SIR,—Few enough papers or magazines review volumes of poetry at the present time. I was there- fore very surprised to sec Mr. lan Hamilton in last week's issue of the Spectator...

SIR,--1 must protest most strongly at your churlish and offensive

comment on Mr. Mark Goulden's admirable letter in last week's issue of the Spectator. It was quite unworthy of the editor of a periodical with such a long and justly respected...

By RICHARD R HODES JAMES M R. ANTHONY CROSLAND'S speech to . the Labour Party at Lincoln, which contained a detailed reference to the public schools, was a pronouncethent. of...

SIR,--In spite of the editorial remark that follows it, I

strongly support the letter by Mr. Goidden in last week's Spectator. If Miss Gainham or Dr: Hellen will take a stand on the principle that we must not hate anybody and must love...

are wrong. There are no 'gerrymandered electoral boundaries.' These are fixed by the United Kingdom boundary commission as are those in England, Wales and Scotland....

Sut,—Like many other people in Britain, I judge the men

and women I meet not by their race, creed or nationality but simply according to whether I like them as individuals or not. As a social psycholo- gist I am also well aware of...

accommodating. At forty I knew I should be 'in the sere and yellow leaf.' At forty-one I had postponed the idea until fifty, then comfortably nine years ahead. At fifty I...

Knitted Brows SIR,—I was rather surprised to see Mr. Roy

Ascott's letter in your issue of March 5. His complaint about Mr. Nevile Wallis's adverse review of his recent exhibition struck me as shrill and abusive. Mr. Wallis is a critic...

March 12) Mr. August keeps on implying that he is a highly intelligent person. But surely it is the part of the intelligent man not to resent the surprise betrayed by many...

SIR,-1 must raise one objection to Strix's as ever enchanting article in the Spectator of March 5. He writes that French spoken with an English accent lacks for the French ear...

SIR,—It would appear that his experiences in Great Britain have

contributed to making Mr. Collingwood August a very unhappy man. I hope that any sequel to the article which he' may write will contain a few practical suggestions on how to...

SIR,—Rabbi S. Warshaw's tirade against the Catholic Church as if Jews themselves were blameless in their dealings with Christians throughout European history indicates emotion...

Steel Bronze and Plastic By NEVILE WALLIS F ROM the heroic ages, the unique powers which sculpture may express have preserved the art in veneration. Only in this century has...

TELEVISION Five of the Boys

R ERIFFUSION'S forty-five-minute study of five bachelors, A Face in the Crowd (March 10), was evidently meant to be taken seriously. It was supported by a two-page spread in the...

Caturday, March 6. To BBC studio, Maida k) Vale, for BBC Symphony Orchestra, under Harry Newstone in Carl Nielsen's Symphony No 5, which I prefer in .situ because it is fun to...

Hobson's Choice. (National Theatre.)—Happy End. (Royal Court.) 11 was cobblers for my first week (The Shoe- 'makers' Holiday) and it is cobblers again for my second (Hobion's...

Spying The Iperess File. (Leicester Square Theatre; 'A' certificate.) T . HERE'S a noseyness in most of us that makes the hard facts of other people's lives im- mensely...

Wide windscape : the sand moulded As waves are, into mounds, But higher, scalloped, rounded. To hold the heat in craters Walled against winds. So too birch and ash bend,...

BOOKS The House of Quincy

By MARCUS CUNLIFFE HE spread of Henry Adams's reputation I began with his death in 1918, at the age of eighty. For the same year saw the publication of his third-person...

A House and its Heads

Poets of the Dangerous Way

1 , 11 n important news is that Robert Lowell, the chef figure of the 'confessional' movement in American poetry, has begun to leave its methods behind. The poems in his Life...

The Vinland Sagas. Translated with an introduc- tion by Magnus Magnusson and Hermann Palsson. (Penguin, 4s.) DURING the last five years Vinland has been more in the news than at...

A Prince of Civility

By EDWARD SHIES J AWAHARLAL NEHRU * was pleased to refer to himself as a lonely man suspended between the two worlds of India and the west, not com- pletely at home in either....

SOLUTION TO CROSSWORD No. 1161

Warning to Gold Hoarders By NICHOLAS DAVENPORT I is a good thing that our Prime Minister is 'going to address the Economic Club of New York immediately after the budget. This...

By LOTHBURY T lIE break in the stock market during 1964 did not deter the Britannic Assurance Co. from increasing its holdings in equities by £4.1- million to £44 million in its...

By CUSTOS L O OKING at the chart of the present 'bear' market in equity shares, what mugs we were not to take advantage of the sharp peak in October last year to liquidate the...

Another Part of the

Forest By STRIX I HAVE every sympathy j with the National Trust, who in the courts last week were held liable—to the tune of £2,500 and costs— for a road accident caused • by...

By ALAN BRIEN DURING the London bus strike of 1958, a swollen- faced busman turned up at his dentist and was refused treatment as an anti-social Socialist who dared to hold...