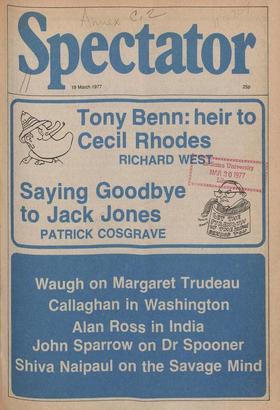 It is understandable that the Prime Minister should be un willing too openly and loudly to denounce the activities Â°f the President of Uganda, or too vigorously to oppose hIS...

is the left-centre doomed? John Grigg The British political system depends upon an alternation of governments representing either the moderate right or the moderate left. How...

One of the representative figures of our age is the highly intelligent and skilled 'expert' who Is a moral and political half-wit ; his invariable, Plaintive cry is, 'If only I...

Richard West Windhoek Windhoek, the capital of South West Africa, lies hundreds of miles from the fighting on the Angolan border, so that most of the troops one sees in the...

The devil they know

Alan Ross Mysore Summer has come early this year and with it the mosquitoes. The south of India has always been neglected, not least by the British since they finally overcame...

Patrick Cosgrave Picture a man large of frame, stooped, bespectacled, balding, always plainly but neatly dressed, though with clothes that seem i llfitting; a man with...

The way is lost

Christopher Booker In the past few weeks I have been discussing, in the fairly narrow context of architecture and the 'great mania for conservation presently sweeping the...

The 'as if' Problem

Alan Watkins There is a problem about as if It concerns both the mood and the tense of the verb that follow s the phrase. This is often, though not always, the verb to be. Is...

Jeffrey Bernard The review sections of both the Sunday Times' and the 'Observer' have been unable to print extracts of the 'Pre-War Diaries' of Jeffrey Bernard, but the...

Over-reacting Nicholas Davenport I have never been able to understand how ec onomics could ever be divorced from PsYchology. Economically an incomes policy can be related to...

Sir: I have only now had my attention drawn to Ferdinand Mount's vulgar comment (5 March) on my Observer piece (20 February). Mount's article is about three times as long as...

Sir: Mr Waugh's description of Lord Goddard as 'a cruel and beastly man' (5 March) will surprise not only those of us who used to appear before him at Bar, but also some at...

That lady in Vienna

Sir: The Marquand references to Ramsay MacDonald in the realms of romance led inevitably to the Skidelsky comments ( I 2 March) 1 have always refused to publish the story of my...

A lease on lives

Sir: If Geoffrey Wheatcroft's reference (12 March) to Andre Gelinas's description of Saigon under the Communists prompts any of your readers to look at the original article in...

The beast in the jungle

Shiva Naipaul The Savage Andrew Sinclair (Weidenfeld and Nicolson Â£5.00) Despite everything, we are still attached to the quasi-mystical notion that wordsâespecially those...

John Sparrow S pooner: A Biography William Hayter (W. H. Allen Â£4.95) Every one knows what is meant by a s Doonerism,' but most people know little or nothing about the man...

Benny Green England versus Australia, a Pictorial History David Frith (Lutterworth Press Â£12.50) On 15 March, 1877, eleven cricketers of England stepped on to the field at...

Philip Howard The New Elizabethans John Colville (Collins Â£6.50) When the Queen acceded to the throne, a fulsome press and a sentimental public hailed the dawn of a glorious...

Replanting the cherry orchard John Russell New York rhe Cherry Orchard is a great many people's Favourite play, and every one of those people IS convinced that he or she knows...

Huon Mallalieu Recently Sotheby's have been Criticised, notably by the editor of Connoisseur, for their role in the projected disposal of the Rothschild collections at...

Slade mark John McEwen Michael Kenny is showing sculpture and drawings at the Serpentine (till 11 April). The drawings are conventional studies for the sculpture which is...

Good books Richard Ingrarns Sometimes I wonder if the BBC ought not to have an internal Monopolies Commission to investigate the people who seem to be cornering the market on...

Candidates David Levy David Levy, who takes over the chess column this week in Raymond Keene's absence, was Scottish champion in 1968, after leaving St Andrew's University. He...