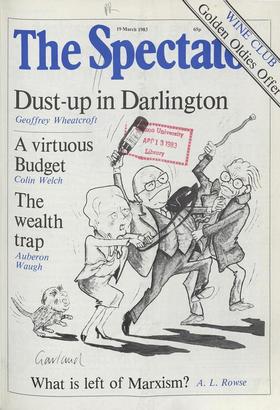 Steady and she stays

Admirably boring Colin Welch O f Sir Geoffrey Howe it is said that even in him there is imprisoned a politician struggling to get out. If any compliment is intended, it is not...

t was quite a good joke by the Russians, if it was they, to land on the uninhabited island of Thule, one of the Falkland Islands D ependencies, take down the Union Jack (why do...

The wealth trap Auberon Waugh Tt was James Callaghan who, as Chan- cellor cellor of the Exchequer, made the discovery, which he announced to the Labour Party conference at...

Sam White Paris T he French Left did not fare so badly in the municipal elections, but on the other hand not so well either. To have done r easonably well, as the...

A question of taste

Murray Sayle Tokyo T wee, sickly, or just sick? Harsh words to use about the current condition of any ancient literary tradition, but today's Japanese writers, it must be...

Love for sale in Zimbabwe

Richard West Harare W hen Joshua Nkomo last week fled to Botswana 'disguised as a fat old woman', as it was written here, a govern- ment spokesman made a sarcastic apology to...

William Deedes D inner in the other man ' s club, they say, always tastes nicer than dinner in your o wn. A fortnight with Australia ' s news Media on their election campaign...

What is left of Marxism?

A. L. Rowse T he influence that Karl Marx has had on the 20th century is simply astounding, or even fantastic when you consider that there were other thinkers who were as...

There was a 'No-Popery' tumult at Pembroke College about a fortnight ago, the cause being the presence of a " Papal Chamberlain, an MA of Brasenose College, of the name of...

The men of Merthyr

Gerda Cohen W ales so mild and vulnerable, meeting us out of the Severn Tunnel with flooded terraces, meek crushed chimney pots and, for Saint David's Day, daffodils, a big...

Terence de Vere White S he took the nom de guerre because she had been acting the part — her first ambition was the theatre — not as a state- ment about herself. She wanted to...

The Spectator Index for July- December 1982 is now available,

Girl talk Paul Johnson Tt is a matter of opinion whether Newbury District Council did the right thing in getting a High Court judge, Mr Justice Croom-Johnson, to shift the...

Sir: It came as something of a shock to this American to read an article by Nicholas von Hoffman (`Old American bones', 12 March) with which I could not quarrel on any score. I...

Sir: Colin Welch in his review of Sir Ian G ilmour's Britain Can Work (12 March) is most tiresome in repeating the absurd fa llacy that the only way to provide new r esources is...

Tribalism Sir: I don't think it will do for Richard West (12 March) to project the tribal con- flict in Zimbabwe as a product of the geographic conditions of the civil war....

Sir: John Derbyshire spoiled an excellent piece (12 March) on North Korea by sug- gesting that Kim Jong-il's real identity might be unknown in the DPRK. He forgot the stamp on...

Sir: It was only predictable that Gavin Stamp, when writing about Glasgow (5 March), would reject the true character of this most dynamic of British cities, whose name has, over...

The Imperial Tragedy J. Enoch Powell Escape from Empire: the Attlee Government and the Indian problem R. J. Moore (OUP £19.50) T he ending of the Indian Empire is a tremendous...

A. N. Wilson O xford University Press have just issued another armful in their Past Masters series, little volumes about 80 pages in length which give an account of such...

Rupert Lycett Green Lambourn, Village of Racing Alan Lee (Arthur Barker £7.95) 11 Mrs Thatcher ever has to leave Down- ing Street I would suggest Lambourn, Berkshire, as an...

Kay Dick D . M. Thomas's unacknowledged use of Kuznetsov's Babi Zar in The White Hotel opened him to accusations of plagiarism. Personally I see no reason why a novelist should...

Sacred cows A.S. Henry T o judge from their latest monthly classical release' sheets, some of the major record companies are in the throes of panic. Their choice of music can...

Over the hill Taki T hate to admit it but the only good thing I about grey hair is that it makes it hard to see the dandruff. Believe me, if anyone tries to tell you that it...

Trifles P. J. Kavanagh I n a recent article in the Times about the marketing jamboree for the Twenty Bes t Young British Novelists, Philip Howard , decently wanting to do the...

Indisposed Jeffrey Bernard A last, after years of trying, I've finally landed the Spring Double. Pneumonia and pleurisy. I wonder how much Lad- broke's would have laid me...

Jaspistos reports: Competitors were asked for a letter from Maggie Thatcher to her friend Pam written in the same spirit of sex- ual solidarity as the letters of Denis to Bill...

No. 1261: Parker's hatchet Set by Jaspistos: You are invited to write a poem (maximum 12 lines) to commemorate the abolition by BR of the chamber-pot in sleeping compartments,...

Comings and goings by Doc A prize of ten pounds will be awarded for the first correct solution opened on 5 April. Entries to: Crossword 599, The Spectator, 56 Doughty Street,...

Pterodactyl Raymond Keene M any readers may have been puzzled by my reference some weeks ago to this extinct airborne saurian in the chess menagerie. The usage derives from...

Wine Club Auberon Waugh I must start with a grovel. Avery's under- estimated the greed of Spectator readers, buying only 70 cases of the Pinot Nero delle Venezie 1979 which I...