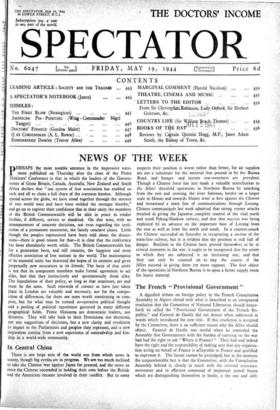 There is one large area of the world war from which news is scanty, though big events are in progress. We are too much inclined to take the Chinese war against Japan for...

P ERHAPS the most notable sentence in the impressive state- ment published on Thursday after the close of the Prime Ministers' Conference is that in which the leaders of the...

_ A dignified debate on foreign policy in the French Consultative Assembly in Algiers closed with what is described as an unexpected resolution that the Committee of National...

A report has been prepared for submission to the Labour Party Conference setting forth a national policy for full employment. Much of the programme covers ground on which there...

The spirit Of internationalism on the widest scale has been asserted at Philadelphia in the first conference of the International Labour Organisation since the outbreak of war....

Visited by a British and an American journalist at his headquarters in the Yugoslav mountains, Marshal Tito made an impressive state- ment about the composition of his forces...

The discussion in the House of Commons on Wednesday regard- ing the House's rights in the matter of delegated powers could not well have been more satisfactory. It showed men of...

SOCIETY AND THE TEACHER

p HE final passage through the House of Commons last Friday 1 of the measure that will surely be known to history as the Butler Act is a notable event. It is a remarkable and...

By STRATEGICUS IN the moonlight of Thursday, May nth, the Allies moved west- ! ward to assault the forward zone of what the Germans call the "Gustav Line." It was this...

By WING COMMANDER NIGEL TANGYE A N American journalist recently referred in Life to the American doctrine of bombing specific factories as a " fetish." Nothing could be farther...

By GORDON MALET T HE story is told, on I know not what authority, of an interest- ing interlude in the informal discussions between the late Minister of Health and the doctors'...

By A. L. ROWSE Q WAS, without doubt, the most eminent as well as the best- loved Cornishman of his time : two things not easy to combine with so curious, and so touchy, a...

By TREVOR ALLEN C OMING off night duty at a wardens' post, and seeing an exquisite dawn over the river, I reflect that dawns mean so much more to us in war-time than in peace,...

By HAROLD NICOLSON S INCE my return from North Africa I have constantly been asked two questions. The first is: " Will France, once she is liberated, relapse into civil war? "...

" Crisis in Heaven." At the Lyric.

THE THEATRE WE would expect to find that a play whose principal characters are Voltaire, Aristophanes, Frederick the Great, Abraham Lincoln, Pushkin, Helen of Troy, Florence...

MUSIC THE B.B.C. Orchestra has just paid a visit to London for four concerts (the last taking place this evening) of more than usual interest. Each programme has contained,...

LETTERS TO THE EDITOR Sta,—Your issue of April 28th contained an article by Viscount Castlereagh, M.P., entitled " De Valera's Lost Chance." The facts set out in the article...

POLES AND THE JEWS

appreciate to the full the concern on account of the alleged anti- Semitic activities in the Polish Army, to which expression was given on several occasions in the House of...

SIR,—May I reply to Mr. Denis Ireland's simple question, which

he puts forward in your issue of May tzth with the air of one propounding in- soluble problems? The reason why there is no conscription in Northern Ireland is because the...

POLES OF THE SANGRO

Sus,—Both as an Englishwoman and a Eutopean I should like to thank you for publishing Zygmunt Litynskrs article " Poles of the Sangro" in your May rzth issue. Amidst the spate...

Ht,—In the paragraphs under the heading of "A Spectator's Notebook" your issue of the 5th inst. I see one on the representation of the rnstaple or N.W. Division of Devonshire....

SIR,—Dr. Johnson was not of opinion that the Scotch were entirely without Latin: "I know not whether it be not peculiar to the Scots to have attained the liberal without the...

4, GREECE'S PERPLEXITIES" SIR, —Dealing with the question of the future

regime in Greece in his article on " Greece's Perplexities " published in your issue of May 12th, your special correspondent mentions among other things that " the King has...

WHAT HAPPENED AT TEHERAN

SIR, — " Janus" is to be thanked for pointing out (as no other responsible writer on this side has done so far as 1 have been able to see) the very mischievous intention of the...

A TRIBUTE TO Q

Sia.---There is a saying, the origin of which I do not know," Those whom the gods love, die young." It may be interpreted in various ways. For me it has but one interpretation:...

SIR, —My attention has been called to a letter published in your columns on May 5th last titled " ENSA in India " and signed " X. Y. Z.", contain- ing wild and unsubstantiated...

THE CONTRASTS OF AMERICA

sw,—It is surely a hard saying of Mr. Angus Watson that only 5 per cent, of the population of the United States is of British origin, i.e., six or seven millions. The American,...

Sitt,—I think there is sound leading for post-war politics in your article " The Labour Party's Future." Party controversy is inevitable and healthy so long as human beings...

SIR, —I read with amazement " R.A.O.C. Officer's" letter in your issue of May 5th. That he should not have been amused is understandable (indeed, neither was I on re-reading it...

THE old water-mill—it is mentioned in Domesday—now grinds for its neighbours the rations of balancer meal for which our poultry clamours and on which it lays a satisfactory...

The Study of War .

Thoughts on War. By Liddell Hart. (Faber and Faber. x5s.) Psychology and the Soldier. By Norman Copeland, C.F. (Allen and Unwin. 5s.) CAPTAIN LIDDELL HART has here collected his...

A Chronicle of Gardening

This Plot of Earth. By H. J. Massingham. (Collins. 125. 6d.) THE pressure of the immediate present is so heavy that everybody needs some relief of one sort or another. No relief...

MR. HART, formerly an officer in the Reichswehr of the Germ Republic, has written short sketches of nine German commander Six of them belong to the army, two to the navy, and...

Russia and Britain. By Edward Crankshaw. (Collins. 8s. 6d.) THIS short book gives a vivid account of contacts between Britain and Russia since Chancellor stumbled into...

SOLUTION TO CROSSWORD No. 269 SOLUTION ON JUNE 2nd

for one guinea will be awarded to the sender of MS first correct ,c.ution of this week's crossword to be opened after noon on Tuesday week, 30th. Envelopes should be received...

Leon Blum Before His Judges. With a foreword by the

Rt. Hon. Clement R. Attlee, M.P., and an introduction by Felix Gouin. (Routledge. 6s.) THIS little book is a useful addition to our knowledge both of the ignoble farce of the...

By CUSTOS IF markets have lost some of their momentum after their steady advance since Budget Day, they give every indication of being well able to consolidate around the...

book had been less discursive it would doubtless have had to omit many entertaining incidents, but it might have gained in character. The author, who was a film photographer and...

MR. JORDAN has probably done himself an ill service by publishing his diary instead of using hs notes as the raw material for a book. Too many people will throw down this volume...