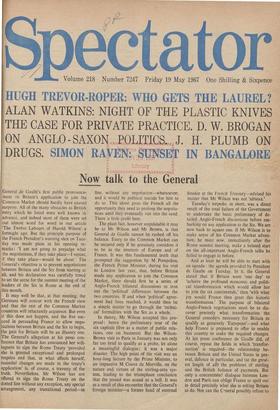 Now talk to the General

General de Gaulle's first public pronounce- ment on Britain's application to join the Common Market should hardly have caused surprise. All of the many obstacles to British...

The night of the plastic knives

POLITICAL COMMENTARY ALAN WATKINS It was, one might say, the night of the plastic knives. (I am thinking of the kind with serrated edges which British Rail supply to cut, or...

CHRISTOPHER HOLLIS Brigadier Pattakos has forbidden the wearing of long hair on the grounds that it is unGreek, scruffy, unmilitary and an indication of sub- versive opinions....

Cracks in the foundations

ANGLO-SAXON POLITICS D. W. BROGAN In the early spring of 1937 I visited Washing- ton after FDR had achieved what was, up to then, the grea !est victory in American elec- toral...

From the 'Spectator,' 18 May I867—Sir Roderick Murchison' has shown very satisfactorily that the Johanna man on whose authority we have hitherto believed Dr. Livingstone's...

AMERICA MURRAY KEMPTON Princeton, NJ—George Wallace, the first gentle- man of Alabama, has timed his tour of the north to coincide with the biennial spring riot season at the...

SCIENCE PETER J. SMITH The greater the publicity a problem receives the larger that problem looms in the public consciousness, but very often the amount of publicity bears...

If we get in R. A. CLINE It would be a gross exaggeration to say that Britain's application to join the Common Market has created even a frisson among the lawyers. There is a...

The case for private practice

MEDICINE JOHN ROWAN WILSON Last week the council of the British Medical Association took an important new step in policy, by deciding for the first time to 'take all action...

J. W. M. THOMPSON I don't believe there has ever been a major planning decision so thoroughly unpopular as the plan to build London's third airport at Stansted. This is not, I...

o gets the laurel?

POETS HUGH TREVOR-ROPER The Poet Laureate is dead: who shall succeed him? Whenever a poet laureate dies, there is this buzz of speculation, generally accompanied by talk of...

THE PRESS DONALD McLACHLAN Cooperative ideas and ideals have worn a little dim these days, but one sympathises deeply with the editor and staff of the Sunday Citi- zen, which...

TELEVISION STUART HOOD The BBC bills it as `the film series for the young in heart.' Rave says—and I have no difficulty in accepting the statement—that it was origin- ally...

Reflections of an addict

JOHN ROWAN WILSON This book represents an interesting idea which has gone hopelessly off the rails. It claims to be a combination of biography and expert psychological analysis...

KEITH JOSEPH, MP The Case for Capitalism edited by Michael Ivens and Reginald Dunstan (Michael Joseph 63s) The real political struggle in this country should be between those...

TERENCE BENDIXSON So Stansted is to be London's third airport in a new chapter of the love-hate relationship between the great British public and their trans- port services....

MAURICE PRIOR Miss Holly Roth's Button, Button (Hamish Hamilton, 18s) leads 'a good clutch of crime novels. To New York to investigate a bomb explosion in an aircraft comes a...

CINEMA TONY MAYER In Cannes this year Britain has established a singular series of records: the greatest num- ber of prize-winning films, the most depress- ingly inflated story...

RECORDS CHARLES REID The half-dozen Adinas sung by Mirella Freni were high among the bonbons and piquancies of Glyndebourne 1963 or any season you please back to the 1930s. She...

ART PAUL GRINKE The West Coast remains an alien culture I'm afraid. But as the fabled Mr Hirschorn has recently voted its capital city number two in the international art...

NICHOLAS DAVENPORT I have always thought that the Stock Exchange should have erected a statue to Dalton on the floor of the 'House.' No other Chancellor brought such a torrent...

JOAN BULL The steady deterioration in the fortunes of the property developers goes on. At the end of last week Hallmark Securities announced that it was pulling out of Durham....

CONSUMING INTEREST LESLIE ADRIAN My impression of the recording industry at one time was that it was dynamic. Latterly I am more inclined to accuse it of static. Surely by now...

Market notes The correction in the gilt-edged market which began last week was further extended on Mon- day and looked like degenerating into a minor slump until the Government...

Europe and the bomb

Sir: If your interpretation of 'holding our nuclear force in trust for Europe' (12 May) is correct, Mr Heath's proposal is verbally provocative without signifying very much. It...

Sir: It is interesting to know that the dean need

not be a priest; just as the Lord Chancellor need not be a peer, and that any ordained priest is eligible to be Pope—he need not be a cardinal. A slightly more positive...

Sir: Professor Trevor-Roper (12 May) may be allowed his little joke against the Church of Eng- land, but he has not got all his facts quite right. He understands the difference...

Sir: In his entertaining article 'Who gets the deanery?' (12

May) Professor Trevor-Roper re- calls that 'Before the war . . . there was a great controversy about the deanery of Christ Church, Oxford, which . . . is annexed to a college....

Sir: My attention has been drawn to Louis Courtney's letter on 'Abortion and the law' (5 May). In it, he offers us detailed criticisms of a non- existent Bill. I have before me,...

Sir: The reference in 'Spectator's Notebook' (12 May) to Mr Crossman's dissertation on the righteous necessity to tell lies in politics will, I trust, be echoed in the House if...

Sir: I have not read Dr Nordlinger's book, The Working Class Tories, but does he really state that manual workers 'positively like being bossed about, preferably by peers or the...

Sir: The article by Mr Nicholas Davenport (5 May) has a lot to commend it. There are two points that need emphasising and re-emphasising so that those concerned with the...

Why all this fuss about sex ?

Sir: After reading John Rowan Wilson's most ex- cellent 'Why all this fuss about sex?' (5 May), how I wished that all parents, teachers, and those in authority would follow his...

What about the workers ?

Sir: Mr Nicholas Davenport in his article headed 'What about the workers?' (12 May) stated that the Wider Share Ownership Council had been con- ducting persistent propaganda for...

Sir: Please, no more of that ghastly colour on the front page of the SPECTATOR. It seems to cheapen one's whole idea of the publication. What about keeping to the gold, or...

JOHN WELLS I spent last weekend in the cottage of a barmy friend not far from Oxford. I arrived very late at night and was immediately im- pressed by the peace and comfort of...