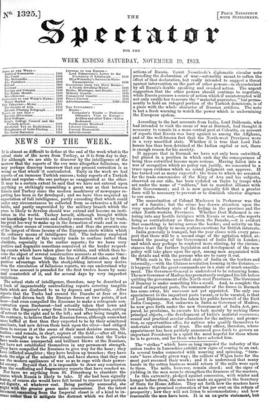 Iris almost as difficult to define at the end of the week what is the actual state of the news from Turkey, as it is from day to day. For although we are able to discover by the...

According to the last accounts from India, Lord Dalhousie, who

had intended to visit the scene of war at Burmah, had thought it necessary to remain in a more central post at Calcutta, on account of reports that Russia was busy against us...

The " strikes " which have so long impeded the

industry of the cotton trades in Lancashire exhibit new signs of coming to an end. In several trades connected with wearing and spinning, "turn- outs" have already given way ;...

TEE Queen has been pursuing the quiet round of her usual avocations, walking and riding. She entertained, on Thursday, another illustrious party with theatricals—the Lyceum...

It is proposed to have "a great day for Ireland,"

The Court of Directors entertained Lord Elphinstone, the new Go- vernor of Bombay, at a farewell banquet, on Saturday, at the London Tavern. A great company was present. On the...

The stream of evidence flowing forth under the pumping of

the Inquiry Commissioners in London City begins to ran clear, and also to branch out in a diversified fount of many streams. Not only have the Commissioners now got to Mr....

The nomination for Salisbury took place on Monday, and the polling next day. At two o'clock on Tuesday, 255 electors had voted for Ge- neral Buckley, and only 88 for Captain...

The Lord-Lieutenant and the Countess St. Germans Went last week on a visit to Woodstock, the seat of the Honourable W. Tighe. When it was known at Kilkenny that the Viceroy...

The election of a Scotch Representative Peer, in room of the late Lord Saltoun, took place on Wednesday, at Ilolyrood Palace. The following Peers were present—the Duke of...

Fituven.—The Emperor and Empress are now at Fontainebleau, a n d expected to stay there until the end of the month. The Russian, A118. trian, and Turkish Ambassadors, have been...

Reports have recently appeared in the American papers, particularly in the Washington Union, stating that England had sanctioned a plan for "Africanizing" Cuba, by permitting...

ar The state of affairs after the war—that is, after on the Danube—becomes daily more important to those who foresee the calls which it will make upon energetic statesmanship....

The packet-ship Solent, with the West India mails, arrived at

South- ampton yesterday. The principal intelligence is the long-expected meet- ing of the prorogued Legislature of Jamaica. Sir Henry Barkly met both Houses on the 18th October,...

The Duke of Beaufort died on Thursday, at Badminton, from

an at- tack of gout in the stomach. He was in his sixty-first year. In his youth he served on the staff of the Duke of Wellington, and was for a few months a prisoner of war....

There was a pretty large attendance at Mark Lane yesterday,

and a considerable amount of business done, in some instances on rather better terms than those of last week. The quantity of wheat taken for con- sumption weekly is said to...

It seems likely that the conduct of Kr. Hugh O'Callaghan,

the Dublin Police Magistrate, in the "great tract case," will be carried before the Irish Court of Queen's Bench. On Thursday, Mr. Whiteside applied to the Court for a...

The Morning Advertiser gives voice to some disappointment at the

in- definite postponement of a brevet promotion in the Army. The allusion seems to intimate more than meets the eye ; at all events it reminds us, that on the occasion of a...

Some time since a plan was propounded for the remodelling

of the Bir- mingham Philosophical Institution, developing its educational scope by the addition of a school of industrial science, and calling it the Midland Institute. The plan...

FROM A PRIVATE LETTER.

St. Petersburg, 5th November 1863. The political events of the last week have been of a very exciting nature, and have formed a sort of crescendo movement. For the last...

Miss Dolby has begun the series of musical soirees which

she is in the custom of giving at this season. This lady is a great favourite of the public; for besides her professional merit, her charaater for exemplary life and amiable...

The amateurs, attracted to the Wednesday Evening Concert of this week by the announcement of a selection from Mozart's Idomeneo as its principal feature, were a good deal...

Mademoiselle Caroline Rosati has made her debilt at the Academie Im- periale, in a new ballet, called Jovita, on les Boucaniers. The scene lies in Mexico, and the plot is a sort...

'The week which has elapsed since the date of our last publication might be called not inappropriately the Week of Good Farces. A famine in the article of via comica, that...

STOCK EXCHANGE, FRIDAY AFTERNOON. Government Securities have been this week on the ascendant. The notice from the Bank of England altering the discount from 4 to 3 per cent on...

On Thursday we witnessed some experiments in the use of what is called the Universal Electric Printing Telegraph, at the office of the pa- tentee ' No. 5 Ludgate Hill. The...

Thezibenthath session of the Sooidty of Arts opened on Wednesday,

with a retrospective and prospective address by lkfr. Hirrry Chester ; Cap- tain Owen, who, had originally been deputed to speak from the char, being unable to attend. • -...

si DID no ItEnnulthauti RUSSIAN DIVERSIONEkoed 7.Iitenaeqe /tuft to Tire Bluebeard of whom it has been related that heillispietaiiifilth ci wives respectably by tickling their...

THE success of the Queen's Colleges in Ireland, limited as it has been'by'the difficulties that surround those institutions, has even been the , more distinct for the fiery...

WHEN Theodore Hook went up to Oxford, and presented himself before the Vice-Chancellor to be formally admitted to the Uni- versity, that dignitary asked him whether he was...

THERE may be favour even in the incidence of martyrdom. One martyr may have an ample return in fame, and even fortune ; ano- ther may undergo the consequences in obscurity and...

THE British public is ill-used—there are no authentic accounts of the Russian and Turkish proceedings down to "yesterday even- ing." Why is that ? Of what use is a double-daily...

GOODNESS is not the one popular attraction for the English people at present. Even if we could " realize " a piece of unadulterated goodness, free from the stamp of prudential...

LORD PALMERSTON'S LETTER TO THE PRESBYTERY OF EDINBURGH. Edinburgh, 9th November 1853. But—In your journal of October 29th you allude in the following words to the "admirable...

A COSTLY DWELLING-HOUSE. An amusing debate took place in the House of Commons one evening near the close of last session, respecting a vote of 58201. which Sir Wil- liam...

Newport, R. I., United States, 27th October 1853. DEAR Scat—Will you do me the kindness to put a short paragraph into your paper, informing those persons who have generously...

On the 27th September, at the Adyar, Madras, the Wife

HEALTH OF LONDON DURING THE WEER =DING NOVEMBER 12.

County of Middlesex, Printer, at the office of JOSEPH CLAYTON, No. 10; Crane Court, in the Parish of St. Dunstan's h, the West, i n th e City o f London; and Published by the...

COOKESLEY'S PINDAR.. IT would be difficult to name any field of human industry in which the returns bear so small a proportion to the outlay of time money, and talent, as in...

PROFESSOR SILLIMAIr'S VISIT TO EUROPE. ° Two circumstances give attraction to

this journey over a tho- roughly beaten field,—the author's habits of scientific precision; and the comparison which the reminiscences of nearly half a cen- tury enable him to...

AVILLION AND OTHER TALES. * Arrnotrun there is a pretty general

complaint touching the custom of fixing three volumes for a novel, it rarely happens in prac- tice that a less space produces a very effective work ;—it being always borne in...

BOOKS. Commentaries on the Laws of England. In four books. By Sir Wil- liam Blackstone, Knight, one of the Justices of his Majesty's Court of Common Pleas. The twenty-third...

SA.LEN REDEEMED. * TErs dramatic poem is about the best of

Mr. Peel's poetical efforts, in spite of a "vaulting ambition." The subject of Salem Re. deemed is neither more nor less than the restoration of the Jews— after repentance; but...

Virxeve litmus. Worm Do wan INDIA.—Nicholas loguitur. 1 ,1 1 are desirous that Persia and India should pour their treasures into my domin- ions. The English are so incredulous...

A sum of 4000 francs has been Bent by Louis Napoleon and the Empress to the Patriarch of Jerusalem, for the French missionaries there. The Prince of Prussia has been occupied...