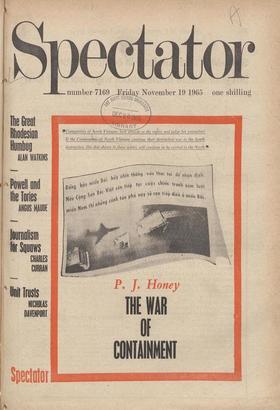 Portrait of the Week'

* MR. KENNETH TYNAN solemnly used that word from Lady Chatterley on BBC television, and later declared himself unrepentant although many a cry of protest was heard. Labour's...

INDUSTRY Strikes and the Law MAURICE GENII wales: The Confederation of British Industry issued this week a frightening document. Since it comes from such a powerful body it...

Partially Humane GILES PLAYFAIR writes : Only a short Bill, it may be thought, was needed to abolish the death penalty. The Bill that has finally been enacted, after months of...

Meeting at Last HUGH 0 . SHAUGHNESSY writes: On Wednesday in Rio de Janeiro the Organisa- tion of American States, like some great wounded pterodactyl, made what may be its...

Journalism for Squaws CHARLES CURRAN, MP, writes: Britain now has fifty-odd periodicals for women only. A decade ago, there were ninety- odd. The Mirror-Odhams merger of 1961...

Politics of Power MURRAY KEMPTON writes: `Black Tuesday had been an epiphany of the push-button age, a demonstration of the final vulnerability of the mightiest society on...

The African nations call upon the British Government to use force against Rhodesia. Devoted to the cause of peace. Black men bid racial conflict cease. But, since the present...

The Great Rhodesian Humbug By ALAN WATKINS I T has been a curiously muted week. There has been no real feeling of drama at Westminster, though the more easily impressed...

POWELL AND THE TORIES

`Seek Not to Smother It' By ANGUS MAUDE, MP The beit and safest way for you, therefore, my dear brcthren, is . . . to re-examine the cause ye have taken in hand, and to try it...

Psywar One of the least publicised activities of the Vietnam

war is the immense psychological war- fare effort mounted by the. Americans. On our cover this week we reproduce .an unfamiliar document which ' belongs to this part of the...

Homage to Gerhardi William Gerhardi celebrates his seventieth birthday next

Sunday. He is surely one of our most intelligent, versatile and, if one may say so, underestimated novelists. The author of Futility, that famous novel of the , 1920s, was born...

I T is of course an illegal act. It may or may not be wise to use the word, but it is also a rebellion. All the same, it is a strangely con- fused British sort of rebellion. The...

Mr. Tynan's Word So someone 'has said it. And, of

course, on BBC. In the middle of the week the story 'was big enough to compete , for front page headlines with Rhodesia and London's dim-6ut. The ensuing fuss was monumental and...

of affluent society could be thrown into confusion [by the New York blackout] was dramatic evidence of the vulnerability of the public, which had been told that such a thing...

By ARNOLD BEICHMAN L A ST spring. when I had fi nally obtained a visa for South Africa, I inquired of one of the Consulate officials whether I could visit South West Africa from...

The Military Balance The extremely useful annual survey put out

by the InStitute fOr Strategic Studies, The Military Balance, is with us again. It is available to anyone who asks from the Institute for 7s: 6d. While little of any...

Listening In â¢ I will be very carefulâ¢ not to

telephone Mr. Wilson in the future. He has set a most alarming precedent by' publishing the transcript of his last telephone call to Mr. Smith. True, there is a sort of...

Sia, â The Duchess of Hamilton appears neither to have listened to

what the Archbishop of Canterbury' actually said in the Aberdeen debate, nor to have read with any attention my article in the Sunddy Tittles putting his remarks into context....

Israel elections contained a number of down- ,right inaccuracies as well as improbabilities. First, It is utterly untrue to state that 'As if by mutual consen t between the...

who do not accept tIie'.. a ssertion of either the present Government or ,, predeq'issgr that they hav e done all in their Pf.iwer to avert minority rule in Rhodesia. . Has ....

With Liberal Support SIR.-1 was interested to read Quoodle's reference

in 'Spectator's Notebook' to the support which Mr. Asquith gave to the Labour party which en- abled it to form a government following the elec - tion in 1923. In that year I...

The Sex War SIR,- -Claire Rayner complains that I have

SIR,-1 read with interest the article on 'The War on

the Beatniks' now being waged in Cornwall. The Race Relations Bill has now become an Act of Parliament. Would it not be wise for the powers that be in St. Ives to study the new...

several times I assume that he is being gently sar- castic when he refers to several dozen beatniks4 sitting 'in all their pleasant eccentricity.' The idea that dirty, untidy,...

Sta,âMr. Oliver Stewart (October 22) appears to hold buses responsible for all the motor-vehicle noise and exhaust fumes from which he suffered at his London office. So far...

The Gift That Lasts A Year

As a, reader you may have the Spectator sent for a year to your friends, in any part of the world, as your Christmas or New Year Gift for almost half the normal subscription...

Helping Fidel SIR,--It may well be, as Quoodle says, 'axiomatic

of British foreign policy that we grant recognition to any government which is reasonably in control of its territory'; but that does not mean we should support it. His...

De Haut en has A RT Nouveau fever has been raging for over five years now, and far from showing signs of abating it looks as if it will get worse. 'That strange decorative...

Orwelliana rritItiRE is an Edinburgh pub where, in the I 'thirties, one could sit and drink with a princely, cloaked Scottish Nationalist author, a dilapidated Etonian from a...

Comfortable Plays W E tend to get so much naked hook in the theatre these days that it is pleasant to be offered a bit. of bait once in aâ¢ while. Spring and Port Wine is a...

BOOKS The War of Containment

By P. J. HONEY T HE old Communist teaching that war is in- evitable so long as part of the world remains under capitalist control and its corollary that World peace will become...

A Night at Lavery's, Ltd.

I can't afford to drink, but, comes the night, And shadows fall, I think of you, and straight Go down to Lavery's, canvass the company there. Peer through the smart of smoke and...

Jane Austen : The Six Novels. By W. A. Craik. (Methuen, 30s.) CENTRING discussions of the novel around a single theme is always precarious. The Novelist as Innovator (a...

The Case of Oleg Penkovsky

IN their own highly bizarre fashion, these two books represent what seems to be the first public encounter, via the literary confrontation of its agents, between the Soviet KGB...

-AUTOBIOGRAPHIES can tell us what it is likeittbr a particular, often ultra-sensitive, person to ibe alive; such accounts are existential and cohfes- sional, usually written by...

Mark of Murder, by Dell Shannon (Gollancz, 18s.). Here is a tense, finely written account of a police hunt on a massive scale: two killers are loose, and Hackett, of the Los...

The Future for Unit Trusts By NICHOLAS DAVENPORT uaiNo October, when so many firms of I./brokers were telling their clients that 'the cult of the equity' was dead, unit trust...

By CUST . OS OMING back to the stock markets after a k_ i short break, one is. amazed at their firmness in the face of the political shocks overseas. The boom in Wall Street is,...

Postal Orders By LESLIE ADRIAN LAST year a pregnant friend of Mine who ex- pected to take delivery of her baby before the last posting date for Christ- mas slid cunningly out...

By LOTHBURY CI IR JOSEPH LOCKWOOD, chairman of Electrical aand Musical Industries, is very confident for the future. He points out in his long address to shareholders that 62...

By ALAN BRIEN WHEN 1 first saw him across a room in 1947, I knew that Kenneth Peacock Tynan would become the first per- son on television' to use what ' the popular pppers have...