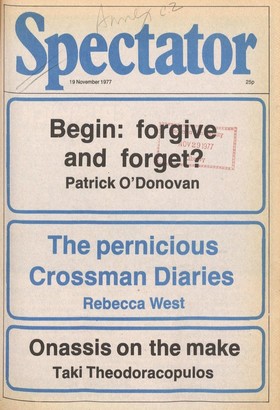 The visit of Mr Menachem Begin, the Prime Minister of Israel, who is due in London on Sunday, provides a nice illustration of diplomatic and political convenience and interest...

From Lianmad with love Ferdinand Mount It is devolution-time in the little town of Llan mad, and all the members of the lulled and dumbfound town are listening With their eyes...

When I read Dick Crossman's revelations of life in Downing Street under the premiership of Harold Wilson, I recall an unhappy summer I spent in a house next to an ill-conducted...

Lennon and Leninism Auberon Waugh The death, at some preposterous age, of Aleksey Grigorievich Stakhanov, champion Russian coalminer, provides the opportunity for a soft,...

Richard West Johannesburg The inquest at Pretoria into the death in detention of Steve Biko, the black political 'leader, is followed with special interest here in the eastern...

C. M. Woodhouse Greek politics used to be notorious for their instability. Prime ministers came and went sometimes at the rate of three or four a year; parties sub-divided like...

Patrick O'Donovan He was not a hero to his own people and to the British he was perhaps the most hated man in the world. He was once refused admission to this kingdom and now...

Struggles in the Sahara

Geoffrey Furlonge One May morning some fifty years ago I stood on the summit of Jebel Toubkal, which at nearly 14,000 feet is the highest point of the Atlas range of Morocco....

Patrick Cosg rave What is going to happen in Rhodesia? Or, if that is too difficult a question, what is current British (and American) policy on that country in relation to...

Bournemouth, but no belles

Geoffrey Wheatcroft On the Monday that nominations closed for the Bournemouth East by-election the two questions of the hour were, where was the New Britain candidate, and,...

The menace of sociology

Jonathan Benthall According to reports in The Times this week, the rate of applications for sociology courses in the universities has fallen. One distinguished sociologist,...

John Grigg No observer of contemporary Britain could fail to be struck by the almost symbiotic relationship between academics and the media. It all began, perhaps, with the BBC...

Calling up Keynes Nicholas Davenport The City so far is takin g the crisis very coolly, refusin g to be alarmed at what seems to be a very alarmin g situation. Last week,...

Sir: The distortions and false judgments in Auberon Waugh's article on Jeremy Thorpe (12 November) must be corrected. Mr Waugh's view that the press has been muzzled or afraid...

Sir: Desiree Hirst's admonitory lecture (5 November) summarises the objectives which, if only adopted by the Ulster Protestants and government, and patronised by Dr O'Brien,...

Sir: Certain passages in my article on Class (12 November) became casualties of last minute cuts, often unavoidable in the publication of a weekly newspaper. As a result of...

Sir: John McEwen's comments on New York (5 November) were interesting, but contained a surprising error. 'The only foreigners you never see in New York are Indians and...

Sir: I am deeply distressed by your pb ishing the paragraph by my friend Peregrine Worsthorne (Notebook, 29 -October) in corn' which he stated that I have 'little sym pathy for...

Kenneth Lindsay William Beveridge Jose Harris (OUP £9.50) Would this particular biography have been written if there had been no Beveridge Report, known to most countries of...

Adam Fergusson Devolution: The End of Britain? Tam Dalyell (Jonathan Cape £4.95; paperback £2.95) In all the sorry tale of how John the Baptist lost his head, the sorriest...

Peter Ackroyd A Scanner Darkly Philip K. Dick (Gollanci SZ3 . 50) The title gives nothing away; it is vaguely Biblical and vaguely Pauline, and suggests that life is not what...

Benny Green The Strange Ride of Rudyard Kipling Angus Wilson (Secker and Warburg; £6.90) The Kipling industry burgeons. In the recent past we have had books about him by Philip...

Depression in the cinema Clancy Sigall Welcome to LA (Screen on tt.e Hill, Haverstock Hill) As a chronic filmgoer I am constantly confronted by the ugly face of capitalism in...

Boyle's law John Mc Ewen Last time I wrote about Mark Boyle here, I finished my review by suggesting that his reputation was justifiably high but not high enough. Now, two...

Beastly Richard lngrams A howling gale whipped round my house, hail rattled at the window panes and a tiny fire flickered dismally in the grate as I switched on the television...

World weary Jeffrey Bernard I thought it was typical, pathetic, obvious and bloody boring that the likes of Lord Longford should have chosen the Virgin Mary and her little lad...