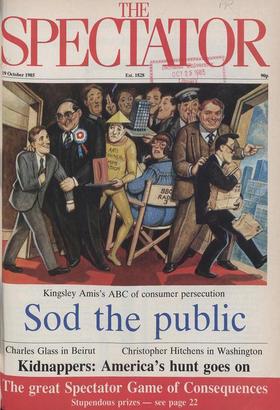 `OK, Mohammed Abbas, come on out — we know you're in there.' F our Palestinian pirates who had cap- tured the Italian liner the Achille Lauro, and had killed an old American...

THE principal of a North London college, Jack Fuller, was last week de- nounced by some race relations officials for having said that local West Indian youths were to blame for...

BIGOTED INTERNATIONALISM T he coincidence this week of the Com- monwealth heads of government meeting in the West Indies and the conference of Unesco in Sofia provokes...

Mr Heseltine's conversion: from Tarzan to chartered accountant FERDINAND MOUNT I wouldn't pay too much attention frankly, you know,' the junior minister said, 'it's just...

RICHARD INGRAMS blame the BBC for much of the violence in our cities. Politicians may refer to 'inner city deprivation', moralists to the `irresponsibility of parents' —...

The unwanted, angry kids who form the thin blue line AUB ERON WAUGH But the phenomenon is by no means confined to Britain or to blacks or to the products of the Labour...

SOD THE PUBLIC: A CONSUMER'S GUIDE

Kingsley Amis rehearses an alphabet of annoyances perpetrated on the public by those who should be serving us ABOUT this A-Z: 'Sod the public' is the working slogan not only...

NOT SENDING A GUNBOAT

Charles Glass on the helplessness of the great powers in response to kidnappers Beirut IN THE days of Europe's imperial glory, the powers treated the kidnapping of their...

FOUR TIDDLERS IN THE BAG

Christopher Hitchens on the extraordinary confusion of America's Middle East policy Washington IT'S always a good sign when people say what they really think. 'We insist,'...

HEROES IN A BAD CAUSE

to the exploited soldiers of the International Brigades AT NOON on a warm, sunny morning, Saturday, 15 October 1985, Mr Michael Foot unveiled a memorial to the British members...

WHAT SPURS ON BERNIE

It is time to warn Englishmen that there is positive danger of the annexa- tion of Burmah, and to ask them whether that project has or has not their approval. Affairs on the...

Nicholas Garland remembers the dramatic life of a dangerous genius THERE are more people than you might think who are mildly obsessed by the film The Third Man. They are given...

Broadcasting: Paul Johnson finds television guilty of encouraging violent crime THE recent riots in Birmingham and Liverpool, and the far more serious one in Tottenham, where...

Plagiarism pays when Lloyd's Bank borrows from the masters CHRISTOPHER FILDES S leepers, wake! A voice is calling, on Zion's ears its cry is falling: 'Bank at Lloyd's', it...

I CAN help anyone who has questions to put to Michael Hepker, the most publi- cised customer of Johnson Matthey Bank- ers. It is a chance for Brian Sedgemore MP, who wants us...

Fleet is paid off

WHO has won the battle of Fleet? United Newspapers' bid is now unconditional, and its chairman David Stevens prepares to inherit the empire of the Aitkens, but who is the...

Sir: On Saturday last I asked in three local bookshops for a copy of Auberon Waugh's Diaries. I was greeted with looks of incom- prehension! However at the fourth shop I...

Sir: Isn't the ultimate bore (or bore's bore), the one

who's always on about how boring the other fellow is? Fran Landesman 8 Duncan Terrace, London N1

Sir: I work for Bookers but I honestly believe (so far as one can every judge one's own motives) that this letter is prompted by a sense of shock, almost outrage, and not by...

Sir, The letter headed 'Rout indeed', by your correspondent of 14 September, has taught me how important is one's choice of vocabulary when writing on an issue as sensitive as...

Sir: Do please go on urging that the Shell County Guides be continued (Richard Ingrams, Diary, 12 October). They are complementary to the Pevsner county guides. The photographs,...

Sir: What a distressing anecdote in Richard Ingrams's Diary (12 October). Whoever this Norman may be whom Mr Ingrams purports to admire so much for keeping his establishment...

Sir: It is something of a relief to know that, for the present, my life is not in any great danger (from Nicholas Rankin, Letters, 12 October). I might, though, have reason to...

SUBSCRIBE TODAY! I would like to take out a subscription to The Spectator. I enclose my cheque for £ (Equivalent $ LISI& Eurocheques accepted) RATES: 12 Months 6 Months...

The pangs of disprized love James Lees-Milne NANCY MITFORD: A BIOGRAPHY by Selina Hastings Hamish Hamilton, £12.50 T his book is no hagiography. On begin- ning it one senses...

All blame and no credit

Alan Watkins CARRINGTON: A LIFE AND A POLICY by Patrick Cosgrave Dent. £10.95 T his is an interesting book, partly because it does not fit readily into any of the categories of...

John Jolliffe STRONG POINTS by Roy Strong Thames & Hudson, £6.95 N ot the least depressing aspect of the publishing trade is the fact that every year many worthwhile and...

T.E.B. Howarth SECRET SERVICE: THE MAKING OF THE BRITISH INTELLIGENCE COMMUNITY by Christopher Andrew Heinemann, £12.95 T here are great advantages in having the adventures...

Man of many parts

Peter Jenkins BLESSINGS IN DISGUISE by Alec Guinness Humish Hamilton, £9.95 W e think of Sir Alec Guinness as the most under-actorly actor of our times. We type-cast him in...

I wonder about chess — whether it's not half The Answer: Implosion instead of Explosion — an un- manageable planet held in total if brief, eclipse (by the backs of our heads)...

Noel Malcolm LEAVES FROM A VICTORIAN DIARY by Edward Leeves, edited by John Sparrow Alison Press/Secker & Warburg, £8.95 T his is a peculiarly pointless book. That, I...

of inward fire Peter Levi EXTENDING THE TERRITORY by Elizabeth Jennings Carcanet, £4.95 T he taste for mature poetry is an acquired one, most easily acquired when one has...

Theatre Magical mystery tour Christopher Edwards The Tempest (The Compass Tour) Les Miserables (Barbican) S it Anthony Quayle was one of the founders of the Compass Company...

Images of the Grand Tour by Louis Ducros (1748-1810) (Kenwood House until 31 October) Traveller's joy David Wakefield L ouis Ducros is one of those fascinating minor masters...

Pulling the strings Peter Phillips t is not always easy to spot the idealism in being a musical agent. Well, any sort of agent; but I have seen how musical ones have to carry...

The great autumn show Ursula Buchan M any things are not what they were. The prize money for the 2,000 Guineas is now rather more than that; if a man is in Carey Street he...

Peter Ackroyd will resume his cinema column next week.

Everyday stories Peter Levi W ith the exception of To the Manor Born (BBC2), which is perfectly light, there is something particularly shaming about falling for a serial....

Protection racket Taki Somehow Lawford knew this and played it to the hilt. Christina too. In no time I found myself in the doghouse because of Lawford's indiscretions, and...

Unsolved mysteries Jeffrey Bernard 0 ne of the great mysteries of this life to me, on a par with the Five Orange Pips and the Solitary Cyclist, is just how the hell did Joanna...

Apocalypse next Alice Thomas Ellis W hat a bloody dreadful year, and it isn't over yet — we still have two and a half months and Christmas to get through. As disaster follows...

Reflections in Kamloops P.J.Kavanagh A few days before, I had been in Kamloops, a town in British Columbia built, as was everything in Canada, by immigrants. Perhaps...

Taimanov strikes Raymond Keene 1 Mosco w n the world championship match here Kasparov, after draws in games 14 and 15, has blasted through with a brilliant win in game 16,...

Autobiography Jaspistos I n Competition No. 1391 you were asked for a true recollection of your own child- hood featuring a memorable adult. My books are in packing cases,...

Please continue and end a story which begins: "By God," Macdonald shouted suddenly, "if you ever call the King any- thing else but Mr Spenlow, I will tear the inside out of your...

High class for family drinking Auberon Waugh A fter the fiasco of the July offer (which in some cases took two months to complete) I hayed decreed that people buying wine...