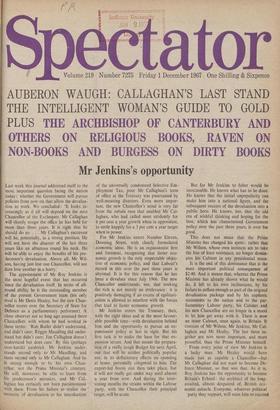 Last week this journal addressed itself to the most important question facing the nation today: whether the Government will pursue policies from now on that allow the devalua-...

Living with the veto

Mr Wilson says we are a proud nation. Per- haps this is part of his private dream-world in which he seeks refuge from the harsh realities of life. Reviled in Africa, Asia and at...

Mr James Callaghan and Mr Roy Jenkins changed places. While Britain settled down to a devalued pound France nourished rumours that the dollar might follow suit: there was a...

POLITICAL COMMENTARY AUBERON WAUGH Perhaps, in the coming weeks, when Mr Jenkins- wakes up to discover the Iron Chan- cellor's hat lodged ever more tightly on his head, he may...

CHRISTOPHER HOLLIS Swallow, when you flew away, What did Mr Wilson say? Said our balances were sound At two-eighty to the pound, Said when you came back again, Everything would...

AFRICA JOE CHAPMAN Salisbury—Mr Nodl Coward has a character in Private Lives who has travelled round the world and formed some accurate, if brief, impressions. `How was...

AMERICA MURRAY KEMPTON 'Others therefore may rush into the fray. I shall read history.'—Henry Adams to Henry Cabot Lodge, August 1876. New York—The posture of Senator Robert...

ISRAEL CHRISTOPHER HOLLIS Ein-Karem—lt is easy enough to say that, whether people like it or not, both Arabs and Jews are irremovable constituents of the population of the...

MEDICINE JOHN ROWAN WILSON Earlier this year the SPECTATOR published a series of articles under the general heading of 'The Environment,' in which a number of writers discussed...

ANTONY JAY You land of Seine and Rhone and Loire And fond illusions of la gloire . Of gigolos and midinettes And garlic and gauloise cigarettes And haute couture and haute...

J. W. M. THOMPSON A difficult point of principle arose when the Prime Minister decided to 'blackball' one of the interviewers proposed for his appearance on the This Week...

The treason of the clerks

PERSONAL COLUMN SIMON RAVEN The English, we are told, do not buy books. A man rich enough to fork out thirty shillings for a round of gins, which vanish for ever in a few...

Youth at the poll

THE TRESS DONALD McLACHLAN I was surprised when I saw the main story on the front page of the Daily Mail on Monday: `Teenagers Tell: Why We Want to Quit Britain: A remarkable...

Look for the label

CONSUMING INTEREST LESLIE ADRIAN There is more tearing of hair, more gnashing of teeth, about textiles than about anything else people buy. Men and women alike, says a recent...

TABLE TALK DENIS BROGAN Two or three weeks ago I was asked by an American periodical to write an appreciation of Mr Truman, with some estimate of his place in the roll of...

From the 'Spectator,' 30 November 1867—The Times and Telegraph alike demand a large increase to the Metropolitan Police, which now numbers only 7,000 men, scattered over 700...

What is pornography? BOOKS

ANTHONY BURGESS After the devaluation announcement and those threatening words about England being a proud country, after the Daily Mirror's dollifying of thinned sterling as...

Stauffenberg : The Life and Death of an Officer, 15

Man of his time

THE ARCHBISHOP OF CANTERBURY Chichester is not one of the best known of English cities, but for nearly thirty years its name was full of meaning to Christian people in many...

DESMOND FISHER A Question of Conscience Charles Davis (Hodder and Stoughton 30s) A New Catechism: Catholic Faith for Adults (Burns and Oates/Herder and Herder 35s) In his...

ROBIN DENNISTON How goes the ferment? Who is stirring the pot? And getting his fingers burned in the process? Both history and news are made by rows and quarrels, rebellions...

NEVILLE BRAYBROOKE There is a certain catchiness about the phrase `Christian atheism,' and in America Dr Altizer's gospel promoting it has caused quite a furor. He is regarded...

1940 The Fall of France General Andre Beaufre (Cassell 42s). The author was in the headquarters of the French High Command in 1940 and tells the story of the French defeat with...

ROY STRONG Has it ever occurred to you that the British - army has the world's best choreographers? Watching Trooping the Colour for the first time this year, rigid lines of...

RECORDS CHARLES REID Sir William Walton's one-act comic opera The Bear, lyrics by Paul Dehn, the whole adapted from Chekhov's skit of the same name, sent me rather off my head...

Time to act IIILARY SPURLING Tartuffe (Old Vic) Halfway up the Tree (Queen's) The National Theatre plans are out. This com- pany already has a brilliance and authority which,...

ARCHITECTURE TERENCE BENDIXSON When the National Theatre took its production of Love for Love to Berlin a couple of years ago, one man was able to move all the sets on stage...

CHRISTOPHER FILDES As sad a comment as any on the devaluation of sterling comes from the Confederation of British Industry. Mr John Davies's letter to his mem- bers casts up...

NICHOLAS DAVENPORT It has become impossible to dine out in London in these post-devaluation days without being pelted with questions—especially from women —about the great gold...

BUSINESS VIEWPOINT J. D. SLATER Mr I. D. Slater is chairman of Slater. Walker Securities Limited. The outstanding success of some of the so- called conglomerates in America is...

PORTFOLIO JOHN BULL With some relief I turn from London to Wall Street this week. It is instructive to see what happened there on Monday, 20 November, the first trading day...

CUSTOS A confused City is reflected in a confused stock market. Last week the Financial Times index took its steepest fall for six years, dipping be- low the 400 mark; but in...

SAVINGS LOTHBURY What should savers do in the wake of devalua- tion? The obvious view to take is that the value of money has been eroded, and that therefore it is sensible to...

Sir: Having spent last year teaching English in Greece, mostly to schoolchildren, I would like to say first of all how well Michael Llewellyn-Smith's observations (17 and 24...

Sir: I am glad that Mr Hepper (Letters, 24 Novem- ber) remembers my suggestion, many years ago, that the opportunity to vote against all candidates at an election would be...

Sir: Your correspondents (17 November) should endeavour to take a broader view of the implication of Scottish (and Welsh) nationalism. As Mr Ludovic Kennedy so pertinently...

Sir : Is there any reason why a relatively prosperous community should receive a new partner who is financially unsound? Judging by Tuesday's press and radio comment, to reject...

If throughout his reign...

Sir: In his article 'If throughout his reign Napo- leon . . .,' Mr Stephen Vizinczey misquotes Mary McCarthy's Vietnam. He quotes her as saying that 'Johnson, escalating, feigns...

Sir: William Bucban's review of my novel, Queen Victoria's. Bomb (24 November), is so generous that I feel I must answer his query about Professor Huxtable's immunity to...

Sir: I really do feel sorry for Leslie Adrian (20 October) in his plight regarding Fahrenheit and Celsius. But, really, he is going about it all wrongly. He should not—not—try...

Sir: The calm news announced last Friday that the Government is being asked to recommend pay increases of up to 7 per cent for senior local government officers already earning...

Sir: By leaning over backwards to avoid partiality, Donald McLachlan (24 November) has succeeded in being unfair to the paper he ‘once edited. He says that on Devaluation...

Mr. Wilson and the Lords

Sir: Possibly my writing was faulty, for the quota- tion from Sir Michael Foster (Letters, 24 Novem- ber) should have referred to an indefeasible right, not an indefensible one....

Sir: I have never been able to see much point

in providing a space on a ballot paper for disapproval of all the candidates, for we already can, and some- times do, express the same thing by writing a disapproving word...

AFTERTHOUGHT JOHN WELLS Rio de Janeiro.—Ever since Barry Humphries, the Australian wit, became obsessed with the song 'Strangers in the Night," suggest- ing at one point that...

COMPETITION Competitors are invited to use the following ten words, taken from the opening passages of a well-known work of literature, in the order given to construct part of...

Across 1 How to be alliteratively arrayed (7) 5 whiten, aspens quiver' (Tennyson) (7) 9 It's very kind of the clergy (7) 10 With which flagellant priests distinguish thee'...