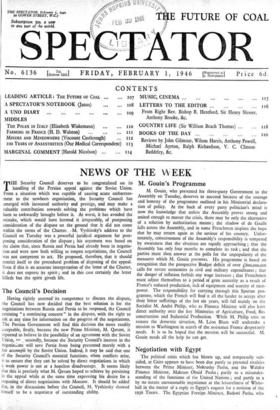 T HE Security Council deserves to be congratulated on its handling of the Persian appeal against the Soviet Union. From a situation which was capable of causing acute embarrass-...

Having rightly asserted - its competence to discuss the dispute, the Council has now decided that the best solution is for the negotiations between Russia and Persia to be...

The political crisis which has blown up, and temporarily sub- sided, at Cairo appears to have been due partly to personal rivalries between the Prime Minister, Nokrashy Pasha,...

M. Gouin, who presented his three-party Government to the Assembly on Tuesday, deserves to succeed because of the courage and honesty of the programme outlined in his...

Trade Unions and the Government

The Bill to repeal the Trade Disputes Act of 1927 will do more to alienate middle-class supporters of the Government at the last election than all the measures of...

The American labour unions are at the moment giving a tolerable impersonation of the American eagle—with an olive branch in one claw and a bunch of arrows in the other. The...

Civil aviation in this country will not fail for want of preliminary discussion, but it may well take years to recover from the handicap of a late start. The debate in the...

THE FUTURE OF COAL

T HE thoroughness with which the Government's proposals for the nationalisation of the coal industry are being ventilated is a heartening thing. It is not particularly easy to...

The careers of Prime Ministers' sons seem to be well

worth watching. Apart from Malcolm MacDonald, there is Sir Cyril Asquith, who has gained distinction in law rather than politics ; Major Gwilym Lloyd George ; Mr. Richard Law ;...

The writer of the weekly comments on the United Nations

Assembly in last week's Spectator may be right in saying that the style and title United Nations Organisation is incorrect, but that the abbreviation U.N.O. will remain...

One alarming prospect that threatens the nation is a new

outbreak of peace celebrations. Why, with two V-Day double holidays— involving, if I remember the figures rightly, the loss of something like 2,000,000 tons of coal alone—behind...

Critics have always been generally agreed about what are the

Ever since the appointment of Mr. Bryce in 1907, British

Ambassadors at Washington have been not of the professional but of the non-professional variety. Lord Halifax was of the latter type, Sir Archibald Clark Kerr, who succeeds him,...

One of the principal Parliamentary problems of the moment is congestion. There is no adequate time for the work to be done. There are so many Bills to be introduced, so many...

M R. EDEN was justified, I think, in saying at Preston on Monday that over a large field of existence the country is possessed by a sense of exasperation and frustration....

By A DIPLOMATIC CORRESPONDENT T would, of course, be grossly exaggerating to say that, as a result I of what has happened during the past week, the United Nations has found...

THE POLES IN ITALY

By ELIZABETH WISKEMANN O NE of the great obstacles to the free development of Italy is the afflux to her territory of refugees and expatriated citizens from many East European...

By H. D. WALSTON T HE present difficulties which are facing the French Government are the natural outcome of the difficulties of living which the whole of Europe is...

By VISCOUNT CASTLEREAGH W ITHIN a few months the Bill to nationalise the coal mines will have passed through the House of Commons. The Conservative Party have announced that...

I 00 YEARS OF ANAESTHETICS

By OUR MEDICAL CORRESPONDENT E VERY major discovery in medicine, as in most of the arts and sciences, has had its various tributaries. Observations and experiments—sometimes...

By HAROLD NICOLSON M ANY of those who during the last fortnight have had occasion to attend the sessions of the General Assembly of the United Nations have been left with an...

BEDALES — SUMMER 1945 THIS is the green country of peace of mind ; of gentle curving hills and shining water, of great firm-rooted oaks and shimmering birches, of wide...

New Voices at Sadler's Wells READERS of my remarks upon the Sadler's Wells Opera a week ago may have discerned in them a certain gingerliness, a reluctance to quench with too...

" Saratoga Trunk." At the Warner. Saratoga Trunk is the smoothest and most entertaining film that Hollywood has sent over for a long time. Recent productions have suggested...

AN exhibition of Mr. Michael Ayrton's drawings is now on show , at the gallery of Roland Browne and Delbanco.

VILLAGE SCHOOLS Sta,—As Bishop of the most completely rural of English dioceses I thank the Bishop of London most heartily for what he has written about village schools. The...

Sta,—Many countrymen will be grateful to the Bishop of London

for drawing attention to the danger which now threatens country life through the policy of closing large numbers of village schools. Parliament can never have expected the great...

SIR,—The letter of Mr. Road Knight, which for the most part will command the assent of all liberty-loving peoples, discloses a confusion of thought when he treats the case of...

SIR,—In your issue of January IIth Mr. Halliwell asks what there is to choose between the Japanese massacre of 6o,000 civilians in Manila and the Allied bombing of Hiroshima....

SIR,—In The Spectator of January 1Ith, Mr. Halliwell assumes that

every British citizen shares the " responsibility" for the two incidents of atomic bombing in Japan. What does he mean? No doubt there is truth somewhere behind the statement,...

Snt,—Miss Downie has scraped beneath the surface of this problem, which is more than some of your correspondents have done. But her argument seems to me to have missed one basic...

SIR,—I share Mr. Gere's amusement. He accuses me of falling into a pit—and then drives into one himself, crank-Case over sparking-plug. No one will deny his facts and...

Snt,—In consigning Mr. V. C. Clinton-Baddeley to the pit which

he is accused of digging for Miss Marguerite Steen, Mr. J. A. Gere has fallen into a fairly deep one of his own excavating. He writes: A lady in her own right marrying a peer by...

Sut,—In your Editorial comment last week on Malayan Reform appears the remark: " It is obvious that small administrative areas like British North Borneo, Brunei and Sarawak must...

AMERICA AND THE LOAN

Sm,—May I make a slight comment on the paragraph entitled "The New Austria," which appeared m The Spectator of January11th? Dr. Renner, who is a Socialist, was elected to the...

In My Garden The bird-bath becomes also an addition to

the scenery of the garden— as a number of examples in my neighbourhood suggest—if it takes the form of a shallow concrete pool, in the shape, say, of a cusp, with a weep- ing...

The draining in war-time of little lakes and so-called ponds banished from the neighbourhoods quantities of most welcome birds—banished them as completely as the draining, say,...

Snt,—It is well to have Mr. Cozens-Hardy's protest, but, after

what has appeared in other papers, The Spectator's offence may be considered negligible. Several months ago the London correspondence of a great provincial daily included such...

Snl,—Miss Rose Macaulay still owes an apology, as she has made another mistake. Sim " Pappertit " sets all Dickensians' teeth on edge ; Tappertit

called Playing Fields, has just come to birth and will be welcomed by both athletes and naturalists. Lieut.-Col. Webster, its editor, is the arch-priest of physical fitness, and...

Sett,—A year or two ago there was some discussion in your columns on the question of extremely severe sentences in cases of homosexual crime. Just recently, a case has occurred...

AMONG newer delectations devised by the B.B.C. is a sort

of Brains Trust for young naturalists. It opened with the courageous support of what many would put in the class of heresies. The " sixth sense " in birds was supported, and one...

Plants and Politics AT a rough estimate, one-third of the three-thousand-odd species of trees and shrubs now grown in the open in this country have been brought—mostly in the...

Press, Parliament and People. By Francis Williams. (Heinemann. 8s. 6d.) IN some respects the title of this important book is a misnomer. In the first sentence of his...

The Approach to Painting. By Thomas Bodkin. (Collins. 8s. 6d.) ONE can almost hear the faint click with which the wicket gate of Professor Bodkin's sensitivity closed, sometime...

Come Alongside. By Commander A. B. Campbell, R.N. (Stanley Paul. 12s. 6d.) COMMANDER CAMPBELL is stated to be one of the founder members of the B.B.C. "Brains Trust " on the...

SOLUTION TO CROSSWORD No. 358

. [A Book Token for one guinea will be awarded to the sender of the first correct solution of this week's crossword to be opened after noon on Tuesday week, February tzth....

Actors—Let's Talk Shop. By Barbara Burnham. (Allen and Unwin. 5s.) To talk shop about acting in the theatre with Miss Barbara Burnham is to be quite serious on the subject, but...

Journey in the Dark. By Martin Flavin. (Hutchinson. 12s. 6d.) Bitten by the Tarantula. By J. Maclaren-Ross. (Allan Wingate. 7s.6d.) A READER unacquainted with the life of...

The Germans and Ourselves. By Karl Barth. (Nisbet. 2s. 6d.) THE eminent theologian here addresses his Swiss fellow countrymen on the problem of their future attitude to the...

By CUSTOS Film the City standpoint, the best that can be said for the Government's investment control plan is that it is no worse than had been expected. When a Government is in...