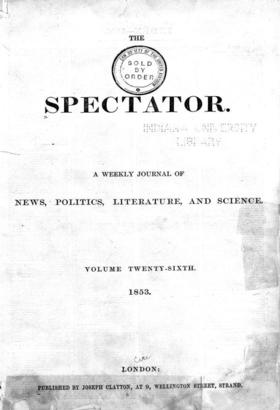 Both Houses of Parliament stand adjourned till the 10th of

February ; having only awaited the completion of Lord Aberdeen's arrangements. The Lords broke up on Monday, after receiving the Premier's statement, and listening to a subdued...

EIGHTEEN-11 - UNDR.ED-AND-FIFTY-TWO has excelled the annus mire- bilis of 1851, not only in .the importance but in the brilliancy of its events : the occurrences of the year...

Although the grand commotions which are agitating to large a

portion of the Continent are not subdued, their outward manifesta- tion has in some degree subsided for the week, and our " say" in this place might almost be a repetition of...

"With these views, I felt it my duty, at all

hazards to oppose the Budget; important parts of which were subversive of those principles on which all prudent financiers have hitherto acted, and an adherence to which I...

FTIAIWZB...-The Emperor's managers in the Senate met with great ap- parent opposition in passing the Se,natUs-consultum modifying the con- stitution promulgated soon after the...

It is announced that Lord and Lady Eglinton will hold an undress re- ception at Dublin Castle on Tuesday next, and depart for Scotland on Wednesday. At a meeting of the...

plete. Two of the names are given as doubtful, only as not having been The following list of the Aberdeen Administration is proximately com- officially announced. Some...

new Minister of Public Works. Sir William Molesworth was nominated for the borough of Southwark by Dr. Chalice, seconded by Mr. Martin, and elected without opposition. Sir...

SATURDAY. This morning's intelligence confirms the view we have taken of the re- elections. Two gentlemen invited to oppose Mr. Cardwell in Oxford city, Mr. Corbet and Lord...

Drury Lane has opened with a greater promise of performance

than on any occasion since the Christmas of last year. The company, to be sure, is obscure enough; and we may venture to assert that the troupe of any one of the principal...

The altered rudder of the Adelaide was hung yesterday afternoon

: she was to take a trial trip today, and will sail tomorrow morning.

While so many political activities are in motion, one sometimes

heant the question, "But what has become of _Lord Grey?" -Retired from the uncongenial strife of Parliament and the ungrateful labours of Downing Street, to cultivate the belles...

Melchor Ordonez is appointed Political Chief of Madrid, in the

STOCK EXCIrANOE, FRIDAY Arrenwooe. The English Funds have been rather heavy this week, and the public have been realizing profits on the recent advance ; the result has been,...

James Rowe, a railway servant at Manchester, while in a

state of tem- porary insanity, on Thursday, cut the throat of his little boy, and then flung himself before an express-train on the Lancashire and Yorkshire Railway. Death was...

By telegraph from Paris this morning we learn that thirty-seven

The theatrical Christmas week having begun on Monday, the rush of " facts " upon our gate is quite overwhelming. When Boxing-day occurs towards the middle of the week, we have a...

It is hardly necessary to state that the close of the year is marked in Paris by the production of a class of pieces called " revues," just as we celebrate the same period by...

POLITICAL &TA . 1? A NTEES. ME discordant noises which precede the execution of a grand symphony are not pleasant to the audience, but are necessary to enable the performers to...

Is one department of the Administration, the difficulty to be en- countered by the new Ministers will lie, not in any bigotry or pre- judice, but in the p resent facts and...

ALREADY a warning voice from Ireland tells us that the course of the new Ministry will not be quite smooth there; and although the nature of its difficulties is not exactly such...

THE philosophy of "enlightened selfishness," said to be so all- sufficient for civilization and the "greatest happiness," is suddenly pulled up on the shores of Australia, and...

MANCHESTER NOT "SENT FOR."

Jr there is a want in the present Ministry, the public will be in- clined to perceive it in the omission of "Manchester." Manches- ter is not specially represented in the...

IN VASTMENTS IN AUSTR A LIAN TRADE.

"t Oun stocks of bread-stuffs are threatening to run low," writes the Itierbourne Argus of September 27th; and "the consequences are almost too painful to be calmly...

I. Let Faction's reign be past and o'er, Though baek'd by men of station : We've tried each Party oft before, But never yet the Nation. Then as the Old Year paws by, And a,s...

PHOTOGRAPHIC EXHIBITION AT THE SOCIETY OF ARTS. The photographic collection to which we alluded last week was opened on Monday to the public. It is a very large one, and, what...

Ma. HAY announces this treatise "simply as complementary to the more elaborate works by which he has endeavoured to establish his theory of the beautiful in form." Its main...

A colossal model by Mr. Bally of a statue of George Stephenson, to i)e erected in the great room of the Euston Square station, has been visible this week at the sculptor's...

the County of Middlesex. Printer, at the office of JOSEPH CLAYTON, No. 10, Crane Court, in the Pariah of St. Dunstan's in the West, in the City of London • and Published by the...

xErrEL's VISIT TO THE INDIAN ARCHIPELAGO. * So far as voyaging is concerned, these volumes contain an account of a visit to the Indian Archipelago, and a run through that still...

BARTER'S SIX MONTHS IN NATAL. * This residence in South Africa,

just before and at the out- break of the present Caffre war, will hardly fulfil the expecta- tions that may be formed of a Bachelor of Laws and a Fellow of New College ; but the...

fiction were, the improba- bility of the governing incident, the distasteful nature of some of her persons and incidents, from their extreme character, and an engrafted...

READE'S PEG WOPFIN GTON. * AGES upon ages have been laughing

at Esop's fable of the player, the peasant, and the pig ; yet in spite of such high authority, we incline to take part with the Grecian audience. No doubt, many of the citizens...

Boom. The last week of the year displays unwonted energy lathe publishing world. Mr. Bentley has sent forth a book from which much of interest and instruc- tion may fairly be...