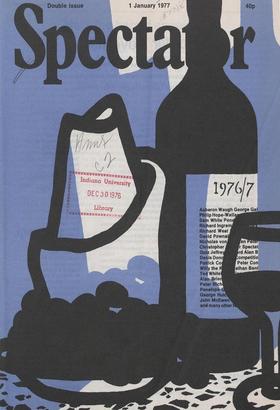 In the past year, for all sorts of reasons (not least the contribution made by Alexander Solzhenitsyn), there has been a renewed examination of just what lies behind the...

Portrait of the Year

Perhaps the day in 1976 that historians of England will remember was 10 March, when for the first time the pound sterling fell below two dollars. For the rest of the year we...

Should politics be polite?

John Grigg 1976 has clearly been one of the least successful years in modern British history, and as it staggers to an end there seems to be growing disenchantment with a...

I remember a conversation a couple of years ago in which my illustrious friend the editor of The Times was wondering, as we contemplated the gathering inflation, how long it...

The Quiz game Auberon Waugh I can understand how mince pies and turkeys and crystallised fruit became associated with Christmas, even tangerines and crackers. At some distant...

Shiva Naipaul It was my last day in the small lakeside town and the Kenyan couple with whom I had been staying suggested that it would be a good idea for me, a traveller from...

Richard West Perhaps the most horrible country in the world is the Equatorial Guinea Republic where one foreign minister was kicked to death under the eyes of the President and...

Nicholas von Hoffman Washington The radio has been saying that the national Christmas tree is dying. It is an enormously tall blue spruce on the Potomac side of the White...

The other sick man

Peter Nichols Rome Father Christmas was not an Italian but a Turk. The important point is that he was a Mediterranean man. Such physical remains as are said to be his are...

Sam White Paris There was a time when to speak ill of Paris was to brand oneself as a barbarian. Times have changed. Today from the Glenda Slaggs and the Lunchtime O'Boozes to...

The old rich: a survey of the landed classes

Stephen Glover A hundred years ago, the Spectator published an article entitled 'The Territorial Aristocracy,' accompanied by a list of the people, more than 700, who owned...

Jack Waterman They were recalling the good days in Grimsby the other evening. With 'The Compliments of the Season' finger-scrawled in white across the bar mirror, surrounded by...

The bores and the bored

Christopher Booker The fi nest thing ever written on the perennially fascinating subject of 'bores' was a contribution many years ago to the Spectator by Alan Brien. It opened...

A cold coming we had of it

Alan Brien The rain rippled like melting Cellophane down the windows of the sex boutiques. It spattered on the surface of the gelid, glycerine canals in little coronets as if a...

Jeffrey Bernard As is our wont at this time of year, we have asked Kenneth Horrid, the very highly paid interviewer with a tape recorder, to speak to our life, love, death and...

Marika Hanbury Tenison In 1976 everyone who knew their onions was growing them too, rotavating their lawn to make a cabbage patch, turning over the herbaceous border to...

The future of capitalism —2 Nicholas Davenport In Part l, I described the three forms of capitalism—first, the obsolete, bad old bourgeois capitalism, second, the welfare or...

and wholly admirable case for the retention of 'parliamentary privilege' (I I December). I would underline it by emphasising that the constant hazard of parliamentary life is...

Sir : Although there are some interesting and important points in Douglas Jay's article Too retiring (II December), I feet that this 'burden of dependency' argument is now...

John Avery Jones Christmas is a time for charitable giving and, without wishing to introduce a mercenary note, it seems an appropriate time to consider what are the most...

Alexander Chancellor Where is the next generation of Spectator readers going to come from ? The readership survey which we launched last October appears to show that 70.1 per...

A tour round the estate

Harold Acton Picasso's Mask Andre Malraux, translated and annotated by June Guicharnaud with Jacques Guicharnaud (Macdonald and Jane's £6,50) A man of genius on the subject of...

Patrick Cosg rave They must have some new editors at Gollancz, for the latest Michael Innes, The Gay Phoenix (£3.40), is described on the jacket as being in a 'new and...

Penelope Gilliatt An Eskimo judge of high degree, who has learnt English by gramophone record in an igloo, sits at the Old Bailey in judgment on the English language,...

And a Merry Christmas to all our readers

Benny Green I am convinced that the damage which Dickens inflicted on the English psyche at the Battle of Dingley Dell is incalculable. I dare say that if you were mad enough...

David Pownall They were both, by nature, competitive men. Most of the dreariness they were experiencing in retirement was caused by the lack of conflict and struggle. Only in...

Kong & the monkey business Clancy Sigal So who is the monster in the new King Kong? I submit that it's not the gorilla but the girl. was nine when I first saw the big monkey...

John McEwen In the wake of the spectacular opening-up of the art situation in London in the late 'fifties and 'sixties a more parsimonious, underground feeling is now abroad,...

Ted Whitehead While Osborne was writing Look Back in Anger, I was at Cambridge learning the fake feelings he was attacking, learning how to be very junior with my seniors and...

The future of the RA

Norman Rosenthal For the general public, the Royal Academy is the country's foremost art exhibiting institution. In the eyes of most professional persons and informed amateurs...

Philip Hope-Wallace Ah to be born again ... out with the Quorn again? Not in my case, I am a coward when mounted. But I'd love to have the treble voice I had when [did...

Low Marx Richard Ingrams At this season it is customary for selfrespecting TV critics to work back over a year's viewing and try to reach some general conclusions about the...