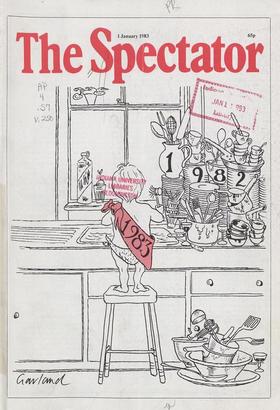 extends good wishes for the New Year to all its advertisers. The following are major advertisers who have appeared in our columns during the past twelve months. Abbey National...

T anus, the god who brings in the New J Year facing both ways, is surely the tutelary deity of politicians. But politicians, not being gods, do not manage the posture as...

It is hypocrisy Colin Welch N ow is the time for New Year resolutions and soon, alas, will come the time to break them. Backsliding is all the more like- ly, in that the...

A s this week consists principally of Bank ..Holidays, I am not where may you think I am, sitting at my desk writing this Notebook, but somewhere completely dif- ferent, doing...

Perfect yuletide celebration Auberon Waugh T hegreat religious revival which I have often remarked on this page plainly makes up in enthusiasm what it lacks in numbers....

Nicholas von Hoffman Washington I sa Mae Lang has lost her long fight against eviction. The 93-year-old lady, after months of resistance by herself and her lawyer, is being...

A girl's best friend no more

Richard West Kimberley T he nearest thing to pornography in this puritanical country is to be found in the Financial Mail, South Africa's answer to the Economist. In a...

The congratulatory style in which our contemporaries chronicle the fact that M. Pasteur has inoculated two hundred animals with rabies — one of the most frightful of all...

The conscience of M. Cot

Sam White Paris president Mitterrand is becoming wor- ried about his image. He indicated as much to a group of political correspondents whom he received at the Elysee recently....

Andrew Brown Stockholm T he idea of a nuclear-free zone in Scandi- navia was invented by two of the most successful statesmen in Europe — Presidents Tito and Kekkonen — one...

In the Spectator of 28 August an article by Anthony Mockler described the background to the present unrest in the Seychelles. In contrasting the present unhappiness in the...

Give them back their marbles

Christopher Hitchens S hortly before the last war, Nicos Kazant- zakis visited England to write one of his best (and least read) travel books. It is pro- bably the most...

Island in the rain

James Hughes-Onslow Hobart, Tasmania BarryB arry Humphries, a leading light in the Wilderness Society, recent- ly told the people of Hobart what he thought of their state...

Peter Paterson T he automatic assumption that you have to go back to 1926 and the collapse of the General Strike for comparative pur- poses whenever the trade union movement is...

David Taylor W hen I worked in a bookshop — a bookshop, incidentally, possessing an extensive clientele with varied interests — we scarcely sold a single copy of those books...

Michael Bywater T his is the story of a man's death and his burial. There is not much to say about the man's life. He lived on an island some twenty miles out in the sound of...

Sir: Thank you for your kindly reference in your Notebook (27 November). Perhaps William Hickey's 'mini-paroxysm' was only a disguised defence of a fellow gossip writer whom I...

Sir: In his otherwise flattering review of John Physick's book The Victoria and Albert Museum: the History of its Building (4 December). Gavin Stamp claims, among other...

Sir: According to my understanding of the matter Alexander's advance across India was halted by the refusal of his Macedo- nians to go any further. Arrianus (and his modern...

Sir: How dare John Gross complain of the dishonesty of the film The Atomic Cafe (11 December) when his own article is at least as tendentious. It is not true that the reviews...

Sir: How much we agree with Richard In- grains's comments on Hymns for Today's Church (4 December) which, together with the new Church liturgy, he describes as disastrous. One...

The sons of Edward Kennedy

Sir: The vitriolic article by Christopher Hit- chens on Edward Kennedy (`Farewell to a family man', 11 December) contains a serious factual error: 'In particularly, after the...

Film of which year?

Sir: Although I realise many of your cor- respondents maintain contempt for the ephemeral, I feel constrained to point out that your 'Film of the Year' (18 December), the albeit...

ET: missing the point? Sir: It is part and parcel of the critic's task to administer salutary doses of cur- mudgeonliness, but when, like Peter Ackroyd in his review of E.T....

Thoughts from the peanut-farm William Shawcross Keeping Faith: The Memoirs of a President Jimmy Carter (Collins £15) T immy Carter insists that he wants his J memoirs to give...

Florence O'Donoghue Lost Causes James Comyn (Secker & Warburg £8.50) This is one of the cases described by Sir James in this interesting collection of short narratives of...

Peter Paterson The Life and Death of Michael X James Sharp (Uni Books £4.95) T he role \A the demagogue has sharply declined in what we call, in our undefined way, the Black...

Francis King Daughters of Passion Julia O'Faolain (Penguin £1.95) T he initial story and the title story can often, between them, be relied upon to convey a writer's dominant...

A.N. Wilson N o illusion can remain intact forever. One of my illusions was that no one ever reads book reviews, which was why I was so happy to become Literary Editor of the...

No doubt others will name some of the many excellent works of history and biography which I seldom have time to read but in which England still continues to ex- cel. The best...

I am tempted to give, as my most enjoyed books of 1982, three by the same author, Geoffrey Grigson (published by Allison & Busby). The favourite adjective attached to Grigson...

Jacobo Timerman's The Longest War (Chatto & Windus and Picador) is a remarkable indictment, by a Jew living in Israel, of the Begin government for pro- secuting the war in...

In The Image and the Eye (Phaidon) Sir Ernst Gombrich has again led us entertain- ingly along the path towards understanding Gestalt psychology and all that; occasionally the...

Books of the year

We continue our contributors' choice of the books they have most enjoyed in 1982. Harold Acton A History of World Art by Hugh Honour and John Fleming (Macmillan) is unques-...

Two of the books I most enjoyed this year were paperback reprints of classic works: Elephant Bill by Lt Col J. H. Williams, first published in 1950, and An English Lady in the...

The most important work of military history to appear this year, and for several past, is William H. McNeill's The Pursuit of Power (Blackwell) a superbly tenden- tious attempt...

There are a number of books that I happily re-read every year, among them The En- chanted April, Vile Bodies and Wode- house's The World of Mr Mulliner, and to this list I now...

Flying finish Mark Amory Clay (Pit) N ot childish, childlike,' said someone in The Knack and that is what shrewd adults hope they are dishing up for us at the moment. This...

Sound effects John McEwen aintings and drawings by Leonid Past- ernak (1862-1945), father of Boris, is the principal exhibition of the current wide- ranging selection offered...

On balance Richard Ingrams Tt is really quite amusing the way research is showing that everyone is switching off, just at the same time the television com- panies are...

Well deserved Taki N ow that 1982 is safely behind us it is time for 'High life's' jet-set awards of the year. Unfortunately, the crisis in ship- ping has put me in the same...

The brutal truth Patrick Marnham T imeplays strange tricks on us all and 1982 should be remembered for the trick it played on Mr Neal Ascherson. Mr Ascherson is a journalist...

Fair city Jeffrey Bernard Dublin T he weather in Dublin was appalling but the welcomes as warm as always. Words, as usual, fail me when I try to finger just what it is I like...

Jaspistos reports: Competitors were invited to produce a piece of prose of 50 words, the first word a monosyllable, the second a disyllable, the third a trisyllable and so on,...

A prize of ten pounds will be awarded for the first correct solution opened on 17 January. Entries to: Crossword 588, The Spectator, 56 Doughty Street, London WC1N 2LL. N.1 2...

Looking back Raymond Keene I have already made the Spectator awards for the chess books of the past year, nominating Jon Speelman's book of Best Chess Games and giving as many...