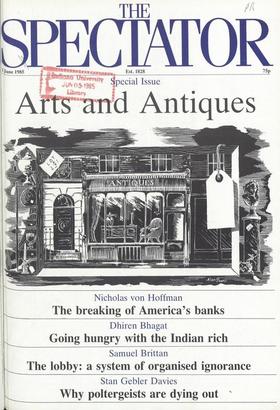 'You'll be pleased to know, professor, that the British taxpayer will be happy to invest millions of pounds in your lead helicopter.' A cyclone swept over the mouth of the...

SABRA AND CHATILA I n future, when someone masters a subject of seemingly impenetrable com- plexity, we shall say of him: 'He could make sense . of Lebanon!' For most us, the...

WHATEVER else they may have contri- buted to the vitality of our national life, coloured immigrants have not been leaders in the field of sexual equality. It is there- fore...

IT IS strange that the conference of the Royal British Legion has called for par- dons for all British soldiers convicted of cowardice in the first world war. One would have...

France, I wanted to seek out my friends and discover what, if anything, had been going on in my absence. Strolling up Long Acre from Covent Garden underground station — the...

The drug menace: an unsuitable subject for clowning AUBERON WAUGH T he kindest thing to be said about the all-party group of MPs who returned last week from the United States...

BULIMIA AT THE BANKS

Nicholas von Hoffman on the spreading disease of American banking New York ON WALL Street they live and die by the quarterlies. Every three months people in the American...

Serious riots occurred in Paris on Sun- day and Monday: A crowd of Anarch- ists were attending the funeral of one of their number, M. Cournet, in the cemetery of Pere Lachaise...

Timothy Garton Ash on Zbigniew Brzezinski's plan for the re-unification of Europe AMONG the neglected psychological problems of our time is that of middle-aged men adjusting...

Gandhi prescribed Nature Cure for the poor, Dhiren Bhagat takes it with the rich GANDHI did not care much for doctors. `Sometimes I think that quacks are better than...

Jo Grimond casts doubt on the supposed virtues of the House of Lords ONE of Britain's worst habits is finding uses for all institutions which, like old dogs, should be put...

The press: Paul Johnson condemns the trade's `indecent self-exposure' DOES Fleet Street deserve its reputation for producing the most reprehensible newspapers in the world?...

Sir: In the article 'The Pope reasserts his power' (11 May) you write that the Cardin- al Josef Tomko is the highly independent Czech. But this is incorrect because the Cardinal...

Sir: Having read Christopher Booker's article on 'The coarsening of cricket' (11 May), I would like to expand on his comments concerning fast bowling, and the apparent necessity...

Sir: Is the new plastic wrapping on our Spectator to try to preserve it for consump- tion up to a week after publication? The week before last's came last Wednesday (it was...

Sir: I recently very much enjoyed a holiday at the Isle of Colonsay Hotel which adver- tises in your classified columns. The rooms were clean and comfortable, the food varied...

Sir: In the 'Portrait of the week' dated 6 April, it was incorrectly stated that the head of a school in North Kensington had been led to resign his post and had subse- quently...

SUBSCRIBE TODAY! I would like to take out a subscription to The Spectator. I enclose my cheque for ( Equivalent $ US & Eurocheques accepted) RATES: 12 Months 6 Months...

German guilt remembered: Russian guilt forgotten COLIN WELCH H ow came the Germans to be para- lysed with fear and shame? No one, I believe has understood Hitler who does not...

Hack shall speak unto hack

How the BBC started to go downhill

Peter Black THE BBC: THE FIRST FIFTY YEARS by Asa Briggs OUP, f17.50 T he first 296 pages of this one-volume history are not 'simply', says their author, an abridgment of the...

My driver takes me home a funny way, Not down, but parallel to, the Old Kent Road. What's this, behind a broken fence? I ask. 'The Bricklayers' Arms Development' — an almost...

Even more ecstatic than sex

What I looked for was a place where water Flowed continually. It could come In rapids, over rocks in great falls and Arrive at stillness far below. I watched The hidden power....

The budding groves of Tunbridge Wells

Stan Gebler Davies THE PARANORMAL: AN ENCYCLOPAEDIA OF PSYCHIC PHENOMENA by Brian Inglis Granada, £12.95 T he odour of sanctity attends persons of a saintly disposition this...

Alistair Hicks B ritain is selling her heritage wholesale, when she should be marketing it. In 1984 £271 million worth of antiques were legally exported from the country,...

Bonington, Francis and Wyld; and Samuel Prout (V&A till 15

September) The past and the picturesque David Wakefield I t is one of the commonplaces of current art-history that English artists taught their French counterparts to see the...

The price of a seat Charles Campbell T here used to be, and may still be, an idea that the sauces in French cooking are there to disguise the duffness of their raw materials,...

Witness (`15', selected cinemas) Life in the slow lane Peter Ackroyd T he film begins with the spectacle of some Amish people, wearing ugly clothes and conversing in a...

Unusual turn for Tavener Peter Phillips I t is unusual these days for a composer to receive a major first performance of his music during a church service. Many peo- ple would...

Royal Ballet Tour Compare and contrast Julie Kavanagh T he Royal Ballet may have left London last month with their tails between their legs (never has a company been flayed...

The kid from Queens Taki New York teve Rubell, the small, bald, self' admitted homosexual from Queens who served time for tax evasion, is once again the talk of this town....

That's entertainment Alice Thomas Ellis I s there a Brazilian in the house? Be- cause I want to know what happens to Isaura the Slave Girl. I can't stand the suspense. It's a...

The birthday party Jeffrey Bernard L ook, I'm sorry to go on about her for the third week on the trot, but she really is excelling herself. She hasn't actually drowned in...

Contact P. J . Kavanagh A . S. Byatt has set her self the task of pondering why some men go willingly to war. It is indeed a problem. War is the most wasteful way imaginable...

Classics Raymond Keene L ast week I gave a powerful win by Artur Yusupov, who won the first prize in the Tunisia Interzonal. Second place was taken by that fierce young...

No. 1374: Double acrostic Set by Jaspistos: Competitors are invited to compose a double acrostic poem, the first and last letters of each line, read vertically, spelling out...

No. 1371: The winners Charles Seaton reports: Competitors were asked

to furnish an extract from a recently discovered short story by any 19th-century British poet. Byron's short story, which turned up among papers belonging to his publisher,...

TO THOSE who are familiar with the classic Rieslings of the Mosel-Saar-Ruwer, Rheingau, Rheinhessen, Rheinpfalz and Nahe, the wines of Baden might come as a surprise — if they...