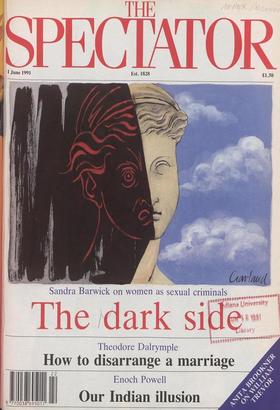 B ritish Telecom made record profits of over Â£3 billion, but said more jobs would have to go. Mr Robin Leigh-Pemberton, the Governor of the Bank of England, was given a 17 per...

Mr Major invites us to join a very unsurprising revolution NOEL MALCOLM K ing Lear does not make a very good role-model for any modern politician, or a very likely one for Mr...

Charles Moore is unwell and will resume his column in

NICHOLAS COLERIDGE H ow little precision there is in the tim- ing of a baby's birth, even after the onset of labour. Would ours emerge into the world on Tuesday, Wednesday,...

WEST London has had a striking warn- ing against the use of petroleum-lamps. On Saturday night, Lord Romilly was sitting in the drawing-room of his house in Egerton Gardens,...

J. Enoch Powell thinks that India has passed beyond the reach of British criticism IN NO country has the news from India awakened deep vibrations in so many minds as in...

William Dalrymple argues that the eulogies of Rajiv Gandhi are most inappropriate THE HOLY man looked like a cross between a tramp and an extra from Star Trek: he had a long,...

Janine Di Giovanni meets the American negroes who claim to be a lost tribe of Israel Dimona, the Negev EVERYONE, it seems wants a piece of Israel. Not just the displaced...

A reader received this letter: Dear Sir, It is a belief that the truly creative person, within their spectrum of prior- ity, neglects the homeostasis and the mediocrity of...

Anne Applebaum finds that the monarchies of eastern Europe may still be useful WERE we living in a simpler, less deman- ding century, HRH the Crown Prince Alexander of...

Simon Heifer explains why John Major has less choice than we think about the date of the general election THERE ARE more than 400 separate days on which the Prime Minister can...

`WE WERE ALL STALINISTS THEN'

Earlier this year, Eric Helfer, who knew he was dying, gave a last interview, to Ian Buruma AT THREE o'clock in the afternoon, the bar at Dolphin Square was full of life: a man...

persist... WORKING in a ward to which all the self-poisoners, wrist-cutters, head- bangers and drunks are brought is like living in a soap opera with continually changing...

THE PERILS OF VANITY FAIR

on the misrepresentation of Margaret Thatcher The press: Paul Johnson IN ALL the comment about Bernard Ing- ham's autobiography, one point appears to have been overlooked: the...

It's question-time at Lloyd's of London - but don't ask Little Bo-Peep CHRISTOPHER FILDES filling to go anywhere and do any- thing, the advertiser in the Daily Telegraph's...

IT IS just as well that Lloyd's now has, in David Coleridge, a chairman who can con- template change with equanimity. Unusual- ly among Lloyd's chairmen, Mr Coleridge has run a...

NOW for my Downing Street wheeze. It is all that such wheezes should be, patriotic, headline-grabbing, no cost to the Treasury â are you with me, Gus, Sarah? It would also...

Sir: J. B. Kelly does not explain (`Touj ours la blague', 4 May) why he is so unhappily marooned in Marssac-sur-Tarn, near Albi in south-west France. His misanthropy is his own...

Sir: You were correct to point out that 'the United

States spends more than four times as much per head on health as Great Britain, and Germany twice as much, yet their statistical indicators of health are, if anything, slightly...

Sir: Mary Ann Sieghart's experience at Heathrow (`Taken for a terrorist', 18 May) is not confined to United Airlines. As a very frequent traveller between London and the United...

Sir: You appear to believe that the NHS is overmanned (Leading article, 4 May), staffed by inefficient and unskilled workers and overburdened by non-productive staff. You seem...

Sir: I am so glad that Taki feels com- plimented when his views are described as politically incorrect. Hopefully he will feel equally flattered if I describe his comments on...

Sir: I find the letter from Mrs Shelford (Letters, 25 May) incomprehensible. I quote from Captain She!ford's own book, Subsunk, page 113. 'A squadron of Fri- gates fitted with...

Sir: Christopher Fildes's tribute to James Keogh does eloquent justice to his mem- ory. He was a true friend to the Discount Market, and in fact the best friend that we ever...

Sir: I can confirm everything in Captain Foster Brown's report.

I was his Navigating Officer and we discussed in detail every aspect of the search. Assuredly no signal was received from DTA/SW and had the Captain re- ceived any private...

Sir: Your piece on 'how modern painters can still save the world' (Another voice, 27 April) raised the topic of contemporary art in a pugnacious manner. Auberon Waugh praised...

Sir . : Mr Wilton's letter (27 April) about Frederick Stocken's architectural oratorio The Cathedral has me 'confess', in my `lengthy' review, that I left during the work's...

Sir: Like many other of your readers, I am sure, I get bombarded with requests for charitable aid to Ethiopia and the. Sudan. Their plight is terrible, and I try to sub- scribe...

Sir: Arthur Oliver of Palermo, British Intelligence officer in Sicily at the end of the second world war, and son of the ghost story writer Oliver Onions, told me strictly off...

Goys will be goys

Sir: I enjoyed Michael Lewis (`The rising price of Jewish jokes', 25 May), but he misses the point. There is a strong, long tradition of self-denying Jewish humour. It's not...

A novel approach to history Raymond Carr DEAD CERTAINTIES by Simon Schama Granta, f15.99, pp. 333 Y ou can't find out truth by writing history. You can only get at it by...

The Rivers of no return

Christopher Hawtree REGENERATION by Pat Barker Viking Â£13.99, pp. 249 With a sigh, Auberon Waugh put the final flourish to his latest free-verse epic, got up from the desk...

She would still enjoy a head-to-head with Heidegger, but not the waiting for it. Her ardour for the sensual kept well in check (say, chaste Lucy Rie) is no less pronounced than...

Enduring what can't be mended

Anita Brookner TWO LIVES by William Trevor Viking, f13.99, pp. 375 I find increasingly, as I read and re-read William Trevor, that the effect is terrifying. It is not that he...

A naive and sentimental love story

Keep up your bright words

The end of something nice?

Ben Pimlott POWER, COMPETITION AND THE STATE,VOLUME III: THE END OF THE POST-WAR ERA by Keith Middlemas Macmillan Press, Â£60, pp.500 hen did the post-war era come to a full...

Disappearing in a puff of smoke

Duncan Fallowell SOUVENIR PORTRAITS by Jean Cocteau translated by Jesse Browner Robson Books, (12.95, pp. 173 T his is a new translation into English of a book which Cocteau...

Often I wish a thief would steal it, or a tutting mechanic thumbs-down it, or the police clamp it, or the Lord, lowering a crane from the sky, up-reel it. Each morning it waits...

And then there was another life

Christopher Monckton WALTER MONCKTON by H. Montgomery Hyde Sinclair Stevenson, Â£25, pp. 215 A .J.P. Taylor, in one of his essays on history, says that the first duty of the...

Art Cause for Celtic celebration Giles Auty was at the opening of the new Irish Museum of Modern Art O nly a mile or so from the city centre, the driver of the taxi I had...

Cosi fan tutte (Glyndebourne) Enchanted evening Rupert Christiansen T he morning after Glyndebourne's Cosi, I woke to find myself floating high on a tide of well-being, as...

Lost in Yonkers (Richard Rodgers Theatre) All too real Douglas Colby I n dramatising the inner life of the emo- tionally crippled, to present reality by itself is not always...

The party's over Taki t was an explosive week for parties in the Big Bagel, though I managed to miss the one blast I had been looking forward to for over a year. But first a...

To crown it all Zenga Longmore W hen Uncle Bisi telephoned and announced in a thunderous voice that he was coming over to the flat for an 'Extraor- dinary Family Meeting', my...

Misty- Jeffrey Bernard T he last night of the play, followed two days later by my birthday and then a televi- sion interview and a newspaper one, has left me feeling...

DO YOU remember the magnificent de- scription of a traditional monumental macaroni pie in The Leopard by Giuseppe Tomasi di Lampedusa? A mouthwatering bit of prose if ever there...

COMPETITION Sonnet for a picture Jaspistos I n Competition No. 1678 you were asked for a sonnet thus entitled and given a rhyme-scheme to follow. The tenner I offered for...

B E D S, 1 TIC ARO,TEN The eight-letter unclued across lights are formed by putting one four-letter unclued down light inside another, thus DI-abet-ES from 1513 plus 14D....

The circumflex and the tilde, officially, and the apostrophe, unofficially, are in danger of abolition or extinction. This seems the perfect subject for a pompous or jocose...

A first prize of Â£20 and two further prizes of Â£10 (or, for UK solvers, a copy of Chambers English Dictionary â ring the word 'Dictionary') for the first three correct...

Ban on calming puffs Frank Keating NO SOONER had I read Auberon Waugh's appalled piece here last week about Telegraph journalists being forced to give up smoking in the office...