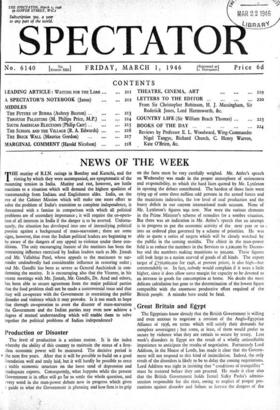 T HE mutiny of R.I.N. ratings in Bombay and Karachi, and the rioting by which they were accompanied, are symptomatic of the mounting tension in India. Mutiny and riot, however,...

The level of production is a serious matter. It is the index whereby the ability of this country to maintain the status of a first- :lass economic power will be measured. The...

The Egyptians know already that the British Government is willing and even anxious to negotiate a revision of the Anglo-Egyptian Alliance of 1936, on terms which will satisfy...

The defensive battle against coal shortage has now reached a stage at which industrial casualties may be reported at any moment. Reserve stocks in London are down to one week's...

That France should have decided to close the frontier against Spain is not surprising in view of the commanding position which the Communist Party holds in the French...

Among all the varied information embodied in the White Paper on housing published on Tuesday one set of figures stands out con- spicuous. The number of permanent houses...

WAITING FOR THE LOAN

L ORD HALIFAX has become something of an American insti- tution. He has given one proof after another of his consum- mate ability to blend the British with the American point of...

The defence at Nuremberg is applying for an odd miscellany

of witnesses. One, asked for by Ribbentrop's counsel, was a "Pro- fessor Conwell-Evans "—to the mystification of Sir David Maxwell- Fyfe, who was not familiar with this...

authorship not only under his own name but also as one component in the David Pilgrim and Francis Beeding partnerships, to say nothing of the brilliant war-booklets which he...

Sir Basil Neven-Spence (to the Minister of Food): "Is it

proposed to klondyke herring for dispatch to the Continent of Europe?" Mr. George Hicks: "Are klondyked herring gold fish?" Jamis.

T HE committee stage of the Trade Disputes Bill, The Times pre- dicted on Monday, would be conducted "in the eristic spirit of the second reading." Readers of that great paper,...

The Oxford Group can claim to be enterprising as well

as evangelical. The Bookseller, the organ of the book trade, quotes a letter which the Lord Mayors of four English cities, one Welsh and one Irish, were persuaded to address to...

To ask whether we are all suffering from subconscious claustro-

phobia sounds a little pretentious. To put it more simply, I wonder how many people are secretly longing to get out of England—not to stay out, but just to see a little of a...

Mr. E. L. Gandar Dower, the Member for Caithness and

Snther- land, seems to be hedging considerably over his resignation. He was always understood to have said at the time of his election (by a majority of six) that he would...

By M. PHILIPS PRICE, M.P. From Haifa the road leads down the coast past acres of orange- groves. Zionist enterprise has made this sandy land blossom as the rose. But all is not...

By PHILIP CARR O N Sunday last Argentina went to the polls to choose a new President and a new Parliament. Brazil had already done so at the beginning of December, with this...

By MAURICE GORDON H E had been in West Africa for -fourteen years. His career had been quite successful in that people thought well of the work he had done in the stations...

By HAROLD NICOLsON IWAS lecturing last week to the Wilton Park Training Centre for German prisoners: it was for me a curious and stimulating experience. So long ago as...

"Scarlet Street." At the Leicester Square. "Challenge to Holly- wood." At the Gaurnont, Tivoli and Marble Arch Pavilion. THE opening of Scarlet Street brilliantly sets the...

The Exhibition of Greek Art. Paintings by P. Wilson Steer. At Bur- lington House.—Winter . Exhibition. At the Leicester Gallery. GREEK art, philosophy, poetry and the idea of...

"The Sleeping Beauty." At the Royal Opera House, Covent Garden. PERHAPS a day will arrive when Covent Garden once again becomes an opera house, but in the meantime it could not...

StR,—Permit me to corroborate the sane and clear-sighted article of Mr. G. A. Squires in your issue of February 22. My own experience entirely bears out what he says. Mr....

SIR,—Your correspondent's article on the Poles in Italy was timely.

Her estimated number of too,000 is conservative. Despite the reduction of official news of their behaviour, this is widely known by the usual "bush telegraph" system to the...

"OURSELVES AND RUSSIA" Si,—There are certain eternal truths which will never bow to political expediency. One of them is that no statesman can enter into partnership with...

Si,—Like so many contemporary writers, Mr. Price, in his article,

"Ourselves and Russia," completely ignores the material on which criticism of Russia is based. Of course it is not directed at her traditional form of diplomacy, traditional...

"THE POLES IN ITALY"

Snt,—I read with some surprise Miss Wiskemann's article on "The Poles in Italy" in your issue of February 1st, but as I had not served in Italy felt that I could not criticise...

SIR, —Let me support Mr. S. K. Ratcliffe's protest against the injurious statement from Hampton-on-Thames to The Los Angeles Times that parcels of food, &c., from America to...

TIMBER SUPPLIES AND THE CRAFTSMAN

Si,—It is doubtful whether the public is aware of the adverse situation of the small master-man, the carpenter, joiner or cabinet-maker, under the present system of...

Si,—As a resident of Uganda of some years' standing, temporarily

in England, I refer to Mr. A. J. Moore Bennett's letter in your issue of February t5th. Mr. Bennett writes: "I have come from a tour of Kenya, Uganda, Belgian Congo, the...

Sta,—Your correspondent, S. K. Ratcliffe, has been more fortunate than

we have in receiving untamperid parcels from America, but at the eleventh hour we have learned to address all complaints to the Customs and Excise Dept. of our county town. A...

SIR, — The article by Mr. G. A. Squires called "The Landless

Labourer" is wholly admirable. To my mind what is most necessary in the English countryside is to create a ladder for the farm labourer by which he will be given a chance to...

Sta,—Although I labour under the disability of not knowing the qualifica- tions for writing about the natives of Africa possessed by Mr. Moore Bennett, who contributes a letter...

In My Garden In the little spring bouquet by my

elbow are included, beside primrose and snowdrop, two heaths, lungwort and laurustinus, which perhaps has the longest flowering season of any plant or bush. The irises, still in...

Sta,—If Mr. Hugh Molson would study carefully and improve the pattern just discernible in the new Regional Organisation for Industry now being welcomed by employers, Trade...

Vulpine Reaction A queer incident is reported in some local

papers in Western England. A workman engaged in loading trusses of stacked hay into a wagon felt an acute pain at the back of his leg and a strong pull on his coat. Apparently a...

The Mounted Thrush Everyone who has listened fondly to the

songs of birds in the early part of the gear has noticed th crescendo of the song. It tends to increase in length and volume as the arc of the sun rises. Another point, of which...

AN AMERICAN SECT AND BUTTONS

SIR, —Your issue of November 23 carried a genial and generous review of my recent book, Religion in America, signed by Stephen Neill. He says that at one point I have failed to...

SIR,—May I add a few words on the subject of collective nouns? "Nouns of multitude," to quote from A Dictionary of Modern English Usage, by H. W. Fowler, "are treated as...

OURS is a very hospitable island ; but it is not always well-treated by its guests. Of late years scares have been frequent about many different creatures and plants: the musk...

The controversy over the heightening of Ennerdale Lake has become a focus of the argumentative clash between the aesthetics and utilitarians. It may be useful as bringing out...

A Great Editor J. A. Spender. By Wilson Harris. (Cassell. 12s. 6d.) THIS life of J. A. Spender is a clear, concise and well-balanced account of one of the most interesting...

Theseus and the Minotaur. By Patric Dickinson. (Cape. 5s.) Time, Gentlemen, Please. By Robert Farren (Sheed and Ward. 5s.) IT is a healthy sign that poets are beginning to...

Japan on the Eve

Behind the Japanese Mask. By Sir Robert Craigie. (Hutchinson. 21s.) THE lessons of two world wars and a calamitous deterioration in our political and economic position have led...

SEEING how enjoyable and fresh are the greater number of these new short stories by Mr. Rhys Davies, it is perhaps ungracious to begin by saying that too many short stories are...

Land at War. Prepared by the Ministry of Information. (H.M.S. Stationery Office. Is. 6d.) MINISTRY booklets, like Ministry films, tend to overlook the failures necessary to the...

SOLUTION TO CROSSWORD No. 362

THE SPECTATOR" CROSSWORD No. 364

IA Book Token for one guinea will be awarded to the sender of the first correct solution of this week's crossword to be opened after noon on Tuesday week, March nth. Envelopes...

t US']0=, MR. DALTON'S injunction, in .his last Budget speech, that Company profits should be conserved and not distributed in increased divi- dends is evoking little response....

THE reader of this book rapidly becomes puzzled about the

identity of its author. Though it is said to have been translated from a French text, M. Dorgot has a curious habit of using German expressions as to the manner born. Moreover,...

Trois Contes. By Saint Romain Arnaud [Aragon]. (Hachette. 3s.) IN this small paper-covered edition—One of the " Cahiers du Silence," the "classics," as the publisher calls them,...